Good morning! Today’s report will focus primarily on the Russian invasion of Ukraine. On this day of global crisis, we at Confluence express our gratitude to the members of the U.S. military and intelligence community who are standing by to serve and protect their fellow citizens.

Russia-Ukraine:  Russian President Vladimir Putin declared a “special military operation” into Ukraine but stated that he has no plans to occupy the region. In justifying his actions, Putin blamed NATO’s expansion into Eastern Europe and his position has been supported by China and Iran. Putin has demanded that Ukraine accept Russian sovereignty over Crimea and renounce its ambition to join NATO. So far, Ukraine forces have been able to hold up against the attack, but it isn’t clear how long they can last. Ukraine President Volodymyr Zelensky has announced that his country will fight and has started to arm civilians. Reports suggest that both sides have seen casualties. The attack did not come as a surprise; hours before the attack, three Russian-guided missile cruisers made their way into the Black Sea and the Mediterranean Sea. Here are our initial thoughts surrounding the invasion of Ukraine.

Other Russia and Ukraine-related news: 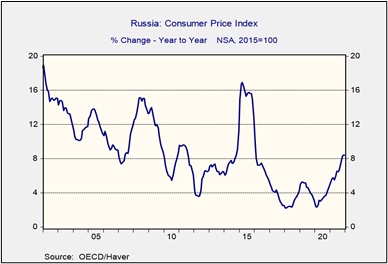 [1] “The Parties agree that an armed attack against one or more of them in Europe or North America shall be considered an attack against them all and consequently they agree that, if such an armed attack occurs, each of them, in exercise of the right of individual or collective self-defence recognised by Article 51 of the Charter of the United Nations, will assist the Party or Parties so attacked by taking forthwith, individually and in concert with the other Parties, such action as it deems necessary, including the use of armed force, to restore and maintain the security of the North Atlantic area.”