On this historic day, as the post-Cold War global order hangs in the balance, our Comment opens with an update on the Russia-Ukraine crisis.  Events on the ground are developing rapidly, but as of this writing, the key developments are that President Putin has ordered Russian troops into Ukraine’s breakaway Donetsk and Luhansk regions and issued a lengthy statement questioning the rest of Ukraine’s independence and legitimacy.  Following our update on Russia-Ukraine, we cover a range of U.S. and other international developments.  We close with the latest on the coronavirus pandemic.

Russia-Ukraine:  Over the long Presidents Day weekend in the U.S., a series of false-flag attacks and a manufactured refugee crisis in Donetsk and Luhansk culminated in President Putin’s signing of documents recognizing the breakaway Ukrainian regions as independent states and establishing mutual aid commitments between them and Russia (see map below).  Press reports have emphasized Putin’s subsequent decision to order Russian troops into Donetsk and Luhansk as “peacekeepers.”  We think the more significant story is Putin’s long speech yesterday reiterating his view that Ukraine is an integral part of Russian culture that can’t legitimately be independent of Russia.  That signals that Putin will probably try to take control of the entirety of Ukraine, at least eventually.  Such a move would be consistent with the current deployment of Russian forces along the entire northern and eastern borders of the country, and it is also consistent with top U.S. officials’ statements that Russia will even attack the capital city of Kyiv in western Ukraine. 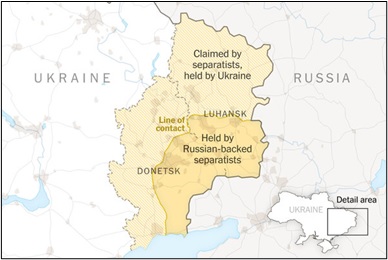 U.S. Monetary Policy:  Federal Reserve Governor Michelle Bowman yesterday said she had an open mind over whether the central bank should kick off interest-rate increases next month with a larger half-percentage-point rate rise.  That’s in contrast with statements late last week by other senior Fed officials that downplayed the need for such a large rate hike.  Since investors remain highly concerned about the prospect of tighter Fed policy, the Bowman statement could provide a headwind for equity values today.

U.S. Financial Market Regulation:  After a slow start, financial firms are starting to settle on the Secured Overnight Financing Rate, or SOFR, as the new interest-rate benchmark to replace LIBOR.  New data show SOFR has gained traction since a December 31 deadline that prohibited U.S. banks from issuing new debt tied to LIBOR.

United States-Iran:  The U.S., Iran, and other world powers are reportedly nearing a deal to revive the 2015 agreement limiting the Iranian nuclear program.  Officials involved in the talks say a revised deal could be finalized in the next couple of days.

China:  State-owned banks have cut their mortgage interest rates in Shanghai and Guangzhou.  The rate cuts apparently aim to help arrest the fall in the country’s housing market since the government started clamping down on real estate developers’ debt levels.

Canada:  Police have now completely cleared the massive truckers’ protest against COVID-19 mandates in the capital city of Ottawa, although smaller demonstrations have temporarily disrupted other big cities in the country and at least one U.S.-Canada border crossing.

Global Inflation:  Recent data suggests consumer price inflation is finally accelerating in some Asian countries that had previously seemed immune to the problem.  For example, inflation has now reached 6.0% in India and 3.2% in Thailand.  Because of soaring pork costs, at least one Thai restaurant owner says he has substituted crocodile meat!