Once again, we open the Comment with the latest developments in the Russia-Ukraine crisis.  As we warned earlier in the week, it increasingly looks like Russia was lying when it said it was starting to pull back its troops.  Just as important, there has been a spike in artillery fire from the Russia-backed separatists in eastern Ukraine, which has the potential to spark an invasion.  Following that discussion, we examine the minutes of last month’s Federal Reserve meeting on monetary policy.  We then review some other U.S. and international news that could potentially move the markets today.  We end with the latest on the coronavirus pandemic.

Russia-Ukraine:  Despite the Russian government’s statements this week that it has withdrawn some of its troops from their menacing positions near the Ukrainian border, U.S. and NATO officials say those assertions were false.  In fact, they say the latest intelligence actually shows a continuing net buildup of forces.  That assessment is also being echoed by private satellite imagery firms and experts.  Meanwhile, the Ukrainian army this morning said Russian forces controlling the breakaway far eastern regions of Ukraine shelled a kindergarten in a Kyiv-controlled area, injuring two civilians. It later said the shelling was happening in more than 20 separate locations in what may be an effort to provoke a Ukrainian response that could justify a full-scale invasion.  Finally, press reports say senior Chinese leaders, including President Xi, are struggling to decide how and how much to support Russia in the crisis without damaging their own interests.

U.S. Monetary Policy:  In the minutes from last month’s FOMC meeting, released yesterday, Fed officials gave no indication that they would hike their benchmark fed funds interest rate by 50 basis points next month, as some investors have started to fear and as St. Louis FRB President Bullard suggested on Monday.  The omission helped salvage what had been a decidedly down day for the financial markets, allowing equities to close essentially flat.  All the same, we caught numerous hawkish elements to the minutes that investors may start to focus on in the coming days.

U.S. Inflation and Growth:  While it’s a bit technical, this Financial Times opinion piece argues that corporate capital investment in the U.S. has recently been much higher than official figures suggest.  If true, the increased productive capacity would promise to help bring down inflation, boost economic growth, and increase corporate profits in the coming years.

U.S. Energy Industry:  Amid weak deliveries of natural gas from Russia to Europe and a resulting spike in prices that drew in U.S. shipments, the U.S. has surpassed Qatar as the biggest LNG exporter in the world for the first time. In the following month, the U.S. supplied almost half of the record 11.7 million metric tons of LNG delivered into Europe.  The data underline the current strong operating environment for many energy firms, despite dimmer future prospects as world energy policies discourage fossil fuels.

China:  Dozens of bidding and procurement documents seen by the Financial Times indicate China has spent almost double its budget for the Beijing Winter Olympics.  The Chinese government has been secretive about the true cost of the games, but the documents show it has already spent about $8.8 billion on them in an effort to project China’s power and success.

France-Mali:  France and its European and West African allies have announced they will shift the focus of their anti-terrorism campaign in Africa eastward to Niger and south to the Gulf of Guinea after being pushed out of Mali by an uncooperative military junta.  The move marks a setback in the effort to keep al-Qaeda and ISIS on the run.  Over time, it means the terrorists may be able to regroup enough to launch socially and economically disruptive attacks on developed Western countries.

Turkey:  As expected, the central bank held its benchmark short-term interest rate unchanged at 14.0% for a second consecutive month, citing increased geopolitical risks (likely a reference to the Russia-Ukraine crisis).  The central bank’s unorthodox rate cutting in the face of high inflation triggered a chaotic slide in the lira’s value last year, but the recent stability in rates has helped slow the depreciation.  So far today, the lira is trading only slightly lower. 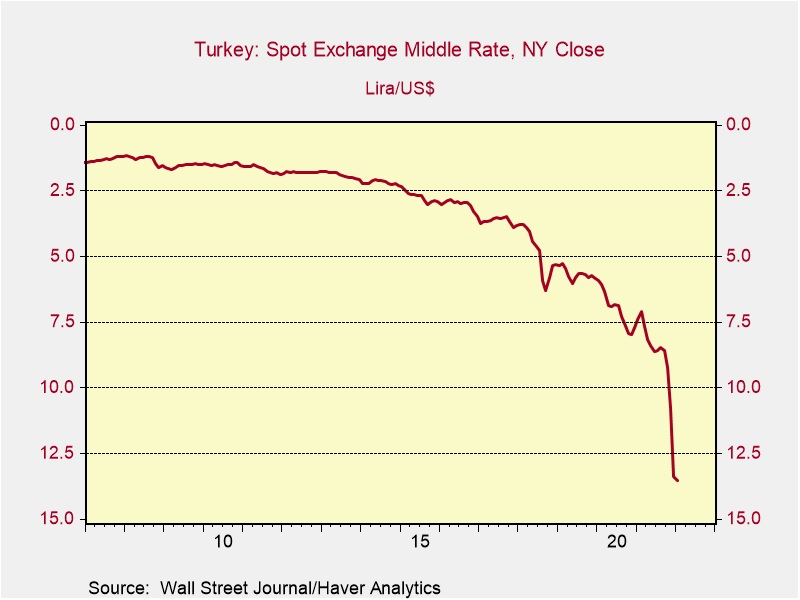 The figures contribute to the evidence that the Omicron wave of the mutation is now in full retreat.