In today’s Comment, we open with an update on the Russia-Ukraine crisis, where there still seems to be no concrete evidence that Russia is really pulling back its troops.  We next cover several developments in U.S. economic policy, including a statement by the Biden administration that it is open to temporarily suspending the federal gas tax in order to reduce inflation.  We then discuss a few international developments.  We close with the latest news on the coronavirus pandemic.

Russia-Ukraine:  Following the Russian government’s statements yesterday and today that it had withdrawn a small number of troops from the Ukrainian border, U.S. and European officials said they have seen no evidence of a significant pullback.  Indeed, NATO Secretary General Stoltenberg today said alliance intelligence indicates Russia is still building up its forces close to Ukraine, and President Biden yesterday warned that an invasion is still “distinctly possible.”  Officials in Ukraine voiced skepticism that Russia’s position was softening and said it was unclear what signals Moscow intended to send.  As if to justify the continued caution, yesterday, the Russian parliament passed a resolution urging President Putin to recognize two Russian-backed separatist republics in eastern Ukraine as independent states. And, the Ukrainian government said a suspected cyberattack hit the country’s Defense Ministry and two state banks.

U.S. Fiscal Policy:  The White House yesterday said it is open to temporarily suspending the federal gas tax after a high-profile group of Democratic lawmakers proposed scrapping the levy until at least next year in an effort to curb inflation.  According to a White House press secretary, “Every tool is on the table to reduce prices.”  The openness to the idea comes as the Biden administration continues to have no luck trying to convince Saudi Arabia to pump more oil in order to bring down prices.

U.S. Monetary Policy:  Republicans in the Senate yesterday refused to attend a committee vote on President Biden’s nominees to the Federal Reserve, delaying the reconfirmation of Chair Powell and the initial approval of all four of the other picks.

European Monetary Policy:  In an interview with the Financial Times, ECB executive board member Isabel Schnabel said the central bank must consider the “unprecedented” rise in European house prices when assessing the high level of inflation and deciding how fast to tighten monetary policy. 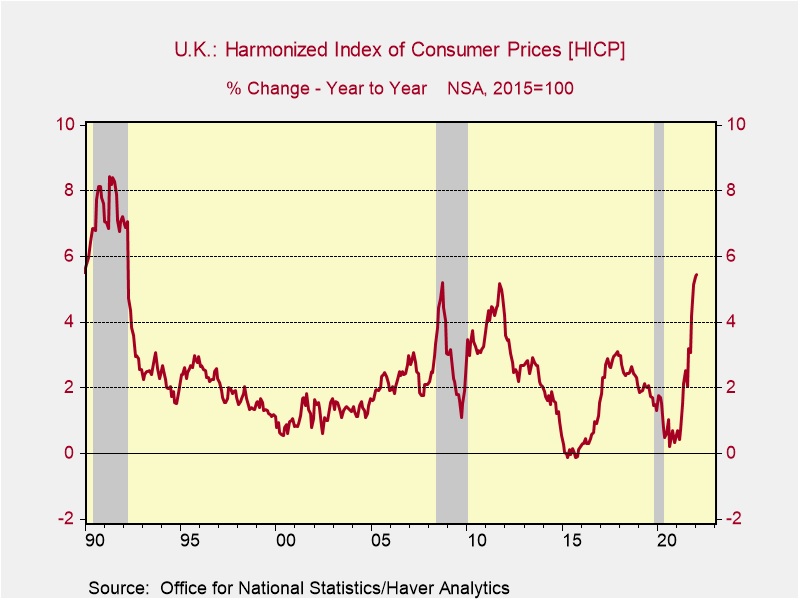 European Union Politics:  The European Court of Justice approved a new EU budget mechanism that allows Brussels to withhold funds from member countries that don’t meet EU legal standards.  Brussels will now be free to use the mechanism to punish Poland and Hungary for their violations of EU rule-of-law principles.

Global Digital Currencies:  The Financial Stability Board, which makes recommendations to the G20 nations on financial rules, today warned that cryptocurrencies are a growing risk to global financial stability.  The report argued that policymakers must act quickly in crafting rules covering the digital asset market, given the tightening link with the traditional financial system.

In the U.S., data continues to suggest that the highly transmissible Omicron mutation is in retreat.  The seven-day average of people hospitalized with a confirmed or suspected COVID-19 infection fell to 85,086 yesterday, down some 38% from just two weeks earlier.