In today’s Comment, we would love to only focus on happy news like the Super Bowl or Valentine’s Day, but the world is much too tense for that.  Therefore, we open with the latest developments on the Russia-Ukraine crisis.  We then turn to a range of international news and U.S. developments that have the potential to affect the financial markets today.  We close with a short recap of the latest news on the coronavirus pandemic.

Russia-Ukraine:  Among the key developments over the last few days, President Biden had remote meetings with a large group of allied leaders on Friday, with Russian President Putin on Saturday, and with Ukrainian President Zelensky on Sunday.  The most important recent development in the meetings was that Biden reportedly told the meeting with allied leaders that the U.S. has intelligence suggesting Putin has ordered his troops to prepare to launch an attack this Wednesday, February 16.  Meanwhile, German Chancellor Scholz will meet with Zelensky today in Kyiv and with Putin tomorrow in Moscow.  Since Scholz would be the last major NATO leader to have a direct or video conference with Putin, that meeting could well be the last best chance to convince Putin to take an off-ramp and diffuse the crisis. 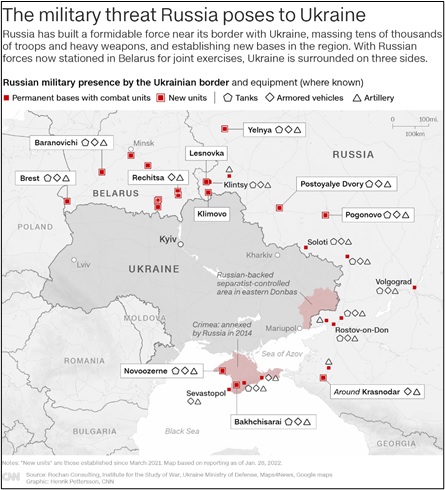 Global Commodity Markets:  The Russia-Ukraine crisis is happening amid low inventories for a wide range of commodities beyond just energy.

Canada:  Police in Windsor, Ontario, yesterday arrested anti-vaccine protesters and towed vehicles to clear access to the Ambassador Bridge linking the city to Detroit.  It’s not entirely clear when traffic on the bridge will be back to normal, but if the flow of trucks normalizes soon, it will help ease the production stoppages that the protests caused to auto manufacturing on both sides of the border.

European Central Bank:  In an interview with the Financial Times, Irish central bank governor Gabriel Makhlouf pushed back against investors expecting the ECB to start hiking interest rates as early as June.  According to Makhlouf, the ECB could stop its net bond purchases in June or a few months later and would only raise rates after that.  His statement is consistent with efforts by ECB Chief Lagarde to walk back her recent hints of an early rate hike, which had unsettled European markets and gave a boost to the Euro.

Spain:  In a regional election over the weekend, the far-right Vox party secured 18% of the vote in Castile-León, likely putting it into position to join a regional government for the first time.  It also suggests that any center-right national government of the future might need to rely on the populists to govern.

U.S. Tax Policy:  As Democrats in Congress try to resurrect a version of President Biden’s “Build Back Better” program of social policy and climate stabilization measures, they’re finding that a key stumbling block is that Senator Joe Manchin of West Virginia is pushing for increased corporate and individual income tax rates, while Senator Kyrsten Sinema of Arizona opposes them.  With the Senate deadlocked 50-50 between Democrats and Republicans, both senators would need to agree for the measure to pass.

U.S. Monetary Policy:  In an interview with the Wall Street Journal, Kansas City FRB President Esther George said the Fed should consider selling bonds from its $9 trillion asset portfolio to address high inflation and guard against harmful effects that can result from short-term rates rising above long-term rates.