Today’s comment begins with an update on the Russia-Ukraine situation. We then cover a range of U.S. and international developments that have the potential to affect the financial markets today. We wrap up with the latest news on the coronavirus pandemic.

Russia-Ukraine:  National Security Advisor Sullivan and other officials have revealed that the latest U.S. intelligence assessments show Russia has now boosted its forces on the Ukrainian border to the point where it could launch an attack at any moment.  The assessments show Russia currently has 83 battalion tactical groups arrayed close to Ukraine’s borders, a substantial increase from the 53 groups it had in December and 60 last month.  Separately, Russian media said some parliament members may try to bring up a bill recognizing the independence of Ukraine’s Donbas region, dominated by ethnic Russians, and has been waging a separatist war against Kyiv since 2014.  U.S. officials worry such a move could offer the Kremlin political cover for an attack.  All this comes as Ukraine faces a severe energy crunch that has forced it to operate all 15 of its nuclear electricity plants simultaneously for the first time since the end of the Soviet Union.  Meanwhile, French President Macron today is visiting Russian President Putin in Moscow in an effort to de-escalate the situation, while President Biden is hosting German Chancellor Scholz at the White House to persuade him to take a tougher line against Russia.

United States-China:  The Biden administration is reportedly close to finalizing its strategy to boost trade in the Asia-Pacific region to counter China’s growing influence there.  The new Indo-Pacific Economic Framework would focus on rebuilding ties with friendly nations in areas such as digital commerce, supply chain development, and green technology.  It would not involve a full-fledged, tariff-cutting free-trade agreement like the Trans-Pacific Partnership, which the U.S. abandoned in 2017.

U.S. Healthcare Industry:  At least a dozen states, led by both Republicans and Democrats, have recently enacted or are considering enacting laws aimed at reining in aggressive financial tactics by healthcare providers and collection agencies.  For example, some of the laws include requirements for hospitals to provide financial assistance to people with low incomes or limit aggressive debt-collection practices.

France:  New polling shows right-wing candidates are in an extremely close race for the run-off spot in the April presidential election.  The latest surveys show President Macron still has the highest support, but upstart far-right firebrand Éric Zemmour has now almost pulled even with long-term right-wing leader Marine Le Pen, who is only about one percentage point behind traditional center-right conservative Valérie Pécresse.  The election bears watching because the potential election of a far-right populist in a country as important as France would likely rattle financial markets in Europe.

Global Monetary Policy:  In a Financial Times opinion piece yesterday, former PIMCO chief investment officer Mohamed El-Erian warned that even though the Fed and the ECB are now in a “hawkish pivot,” the switch to tighter policy is still partial at best, too slow, and likely to lead to an over-compensation later this year. 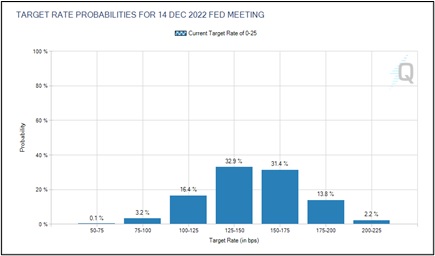 Global Financial System:  With the world awash in capital seeking higher returns, and with banks wanting to offload risk to reduce capital buffers, Credit Suisse (CS, $9.64) has securitized an $80 million portfolio of loans backed by its ultra-high net worth clients’ yachts, private jets, and other assets.  And what is the interest rate on the portfolio?  It is over 11%.