[Posted: 9:30 AM EST] BREAKING NEWS:  The ECB has rejected a request by the troubled Italian bank Monte dei Paschi (BMDPY, $0.18) for an extension of the deadline for the bank to raise more capital.  Italian banking authorities had requested more time to complete a €5 bn rescue package but the ECB has indicated that it doesn’t believe an extension will change the likelihood of a successful bailout.  This action by the ECB all but insures the Italian government will need to bail out the bank, but according to EU rules, equity and bond holders must absorb the first losses.  The sticking point is that there are €2.1 bn of subordinated bonds that were sold to retail investors; if these investors suffer losses, the political fallout will be massive.  We suspect that Italy will allow institutional bond and equity holders to suffer losses but attempt to reimburse the retail bondholders.  However, sparing the small bondholder may not be possible.   We have seen the EUR weaken on the news.

The other major political news emerged from South Korea where President Park was impeached by the legislature.  The motion needed 200 votes in the legislature, a two-thirds majority; it passed with 256.  Park is now suspended and her duties will be assumed by PM Hwang Kyo-ahn.   If all goes according to plan, new elections will be held 60 days after she officially leaves office.  Park has offered to resign, and so in the wake of her impeachment, if she does quit, the clock starts.  On the other hand, without Park’s resignation, the impeachment isn’t official until the Constitutional Court ratifies the measure within the next 180 days.  Thus, in theory, South Korea could be without an official president for 240 days. We suspect this won’t be the case and new elections will occur soon.

OPEC holds meetings with non-OPEC members over the weekend.  Although there are residual concerns that the deal could still fail (the Saudis have indicated they won’t cut if non-OPEC members fail to cut output by 0.6 mbpd), we suspect a deal will get done and promises will be made even if no actual reductions occur.  Reuters is reporting that Saudi Arabia has already announced cuts to U.S. and European buyers, although no reductions are planned for Asia, the new area where OPEC and Russia are vying for market share.  In reality, we don’t expect material cuts from non-OPEC members and cartel compliance will lag.  However, it will take a while for that reality to set in which means oil prices will likely remain richly valued.

Yesterday, the Federal Reserve released the Financial Accounts of the United States report for Q3, which more senior readers will remember as the “Flow of Funds” data.  This is a remarkably rich report, full of insights as to the health of the economy.  The following charts are some of the ones we found most interesting. 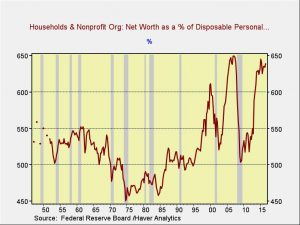 Net worth as a percentage of after-tax income rose to 638.8% from 633.9% in Q2.  This number remains elevated and does reflect higher values for homes and financial assets. 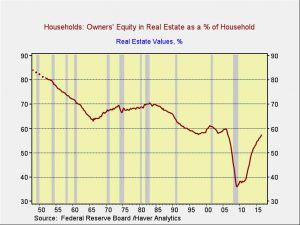 Owners’ equity in their homes rose to 57.3%, up from 56.8% in Q2.  History would suggest that the average homeowner will consider equity of 60% as normal and once this is achieved, we would expect to see greater confidence in real estate. 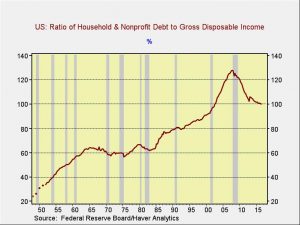 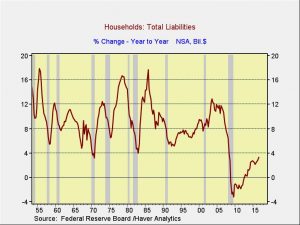 Prior to the Great Financial Crisis (GFC), four percent growth was rarely seen at the trough of recessions.  Negative growth has not been part of the postwar experience until the GFC and although households are adding to debt, it is clearly at a slow pace. 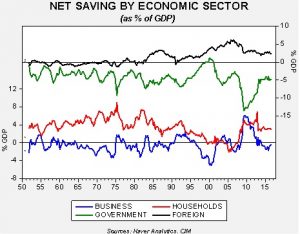 This chart shows net saving as a percentage of GDP.  Business dissaving usually translates into investment, although this quarter most of the dissaving has gone to share buybacks and dividends.  The decline in foreign saving reflects a narrowing trade deficit.  If President-Elect Trump is trying to recreate the pre-1980 America, household saving will need to rise dramatically and the trade deficit will also need to drop.