[Posted: 9:30 AM EST] The ECB gave us a modest surprise this morning by announcing a tapering of QE.  Expectations called for an extension of the current program through September.  Now, through March 2017, the bank will purchase €80 bn of bonds; from April to December, the bank will purchase €60 bn per month.  So, we are getting a smaller amount of bonds purchased but for a longer period of time.  The total purchases actually rise (the new program buys €540 bn compared to expectations of €480 bn).  Rates were left unchanged.  The EUR rallied briefly but has since reversed.  The German Bund rose 8 bps to 43 bps.

At the time of this writing, ECB President Draghi has completed his formal comments and is in the Q&A session.  His formal comments were quite dovish.  He suggested that QE could be extended and expanded if necessary, and he has refused to describe today’s ECB decision as “tapering.”  His definition of tapering, in response to a question, is a gradual reduction of purchases with the goal of ending QE.  Thus, by this definition, the ECB is probably a long way from ending QE.

Here are a few charts to show market reaction.

The EUR did spike but rapidly reversed.

Longer duration yields rose, although we have seen some reversal.

Overall, we view ECB policy as dollar bullish, EUR bearish and equity bullish.  The markets are taking the move as bond bearish, but we think that markets will conclude as the day wears on that the bank’s move isn’t all that bearish for bonds, either.

There was a large oil industry transaction overnight.  Russia announced that it has sold a 19.5% stake in the state-controlled Rosneft (RUB 375.80) to Glencore (GLEN, 305.60 GBX) and to the Qatar Investment Authority.  We won’t go into the details of the transaction (see footnote),[1] but our interest lies in whether or not this transaction violates sanctions that are currently in place.  Since there are no U.S. firms involved, it is possible that the deal will skirt sanctions.  On the other hand, both buyers probably touch the U.S. financial system and could face an American reaction.  This will be an interesting test for both the Obama administration and the incoming Trump administration.  We would not be surprised to see a protest from the Obama government and perhaps an attempt to interfere with the deal.  We have no idea what Trump will do.

The other interesting issue with this sale is that it explains why Russia was so supportive of an oil output deal.  Driving up oil prices makes the sale more attractive.  Now that the deal is done, it will be interesting to see if Russia is as supportive of production cuts. 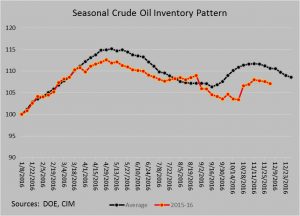 Based on inventories alone, oil prices are overvalued with the fair value price of $40.31.  Meanwhile, the EUR/WTI model generates a fair value of $38.78.  Together (which is a more sound methodology), fair value is $37.41, meaning that current prices are well above fair value.[2]  Although we expect the oil market to give OPEC the benefit of the doubt, some period of consolidation at these levels would make sense.