[Posted: 9:30 AM EDT] Happy Friday! Seventy-seven years ago, Japanese Imperial forces bombed Pearl Harbor.  It’s also employment day.  We detail the data below but here is the quick take—the data was a bit soft, with payrolls coming in below forecast at 155k, below the forecast of 198k.  The rest of the report was near forecast.  The most interesting overnight price action was the recovery in European equities, while U.S. stock futures remained in the red.  Here are the details and other news items we are watching:

Fed talk: Yesterday, equities rallied strongly into the close, nearly reaching “green” levels after a hard selloff.  The key factor was a WSJ[1] report suggesting the FOMC is considering a “pause” in the rate hike cycle.  The consideration is certainly reasonable.  Inflation remains under control.  Our best estimates for inflation next year suggest core CPI will probably reach around 2.5%, well within the likely range of tolerance for policymakers.  Recent market volatility and especially the flattening of the yield curve suggests caution.  The NYT,[2] the paper of elite opinion signaling, quoting our friend Barry Bannister, suggests President Trump may be right about the risks of raising rates too quickly.

Two-year deferred Eurodollar futures have reduced the expected fed funds rate by 25 bps and are now signaling a terminal rate between 2.75% and 3.00%. 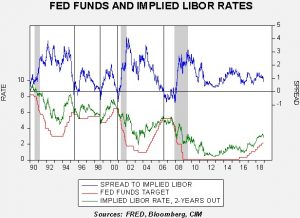 Given the degree of uncertainty, a pause would not be unreasonable.  Part of the problem for forecasters is that the Fed has moved rates in a lockstep fashion for two cycles now.  This wasn’t always the path of higher rates in the past but it has become expected now.  Waiting a quarter or two to hike and breaking the pattern would set a different precedent which would probably be positive.  A pause would put the idea in the minds of investors that the FOMC is truly data-dependent and policymakers will adapt when the data softens.  We still expect a rate hike later this month (December 19, to be precise), but the pace in 2019 would not be preset, which would be positive for financial markets. 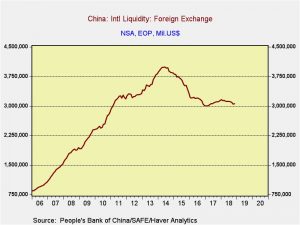 We watch this data for evidence of currency intervention.  The fact that reserves were mostly stable suggests only modest intervention, perhaps on the order of $11 bn last month, which was down from $13 bn in October.  The reserves data does suggest external account stability, which is positive for the Chinese economy.

The arrest of Meng Wanzhou—an update: Yesterday, we reported that Canadian[3] officials had announced the apprehension [4] the CFO of the Chinese telecom firm Huawei (002502, CNY 4.71).  The reaction of Chinese officials, at least so far, is rather measured.  Reports[5] suggest the Xi government is separating the trade talks from the fate of Meng Wanzhou.  Her issues will apparently be managed by national security officials, while trade negotiators will discuss, well, trade.  We have no idea if the two issues will remain separate.  We do note that Chinese policymakers are taking steps to support employment,[6] which may explain why Chairman Xi wants to keep the issues separate.  U.S. trade policy may be hurting the Chinese economy more than estimated.  In other words, China may need relief more than we think, thus the odds of a longer lasting truce are higher than the market expects.

That still doesn’t change the issues surrounding the long-term trends in Chinese/U.S. relations.  As we noted yesterday, China is in the process of adjusting from the initial industrialization phase and history shows no other nation that made this transition did so easily.  When European economies reached this point, they turned to imperialism and, sadly, mass industrialization war.  The U.S. dealt with this moment with the Great Depression.  When Japan and Germany made a second turn at this problem after WWII, Germany addressed it by moving up the value chain and 21st century imperialism, otherwise known as the Eurozone.  Japan has adjusted with three decades of economic stagnation.  Chinese leaders know where they are and are trying to adjust.  They are attempting to move up the value chain by “acquiring” American technology and through imperialism with the “one belt, one road” project.  In the meantime, they need trade with the U.S. to maintain growth.  Although trade policy is getting all the attention, the real issue is technology.  If China is forced to develop indigenously it may take too long and could push China to follow the path of Japan.  In addition, if the U.S. really “pivots” toward Asia, imperialism won’t work either.  Much can go wrong.

At the same time, nothing described above is a secret.  It has been generally acknowledged since 2010 that China needs to adjust.  However, its leaders were always fearful that moving full bore into adjustment would lead to a collapse in growth and undermine the legitimacy of the Communist Party of China (CPC).  So, they have been putting off the adjustment in a sort of “stop/go” cycle that financial markets have gotten used to.  What is hard to know is when the adjustment can no longer be avoided.  If we are at that point, then risks to the global economy are much more elevated than they have been and there is some evidence that financial markets are starting to fear this outcome.   Reports from traders indicate a high level of uncertainty over market action.[7]  And, there is a growing realization that the status quo of U.S./Chinese policy[8] is truly ending and what occurs going forward is unknown.[9]  John Maynard Keynes had a famous line when asked about the long-run impact of deficit spending, saying, “In the long run, we are all dead.”  Years later, when inflation raged in the 1970s, the quote became, “We are in the long run and Keynes is dead.”  We don’t know how close China is to the “long-run,” the hard adjustment period.  But, if it’s close, the impact will be significant.  Our take is that Chinese officials are in no hurry to aggressively address the transition, but it is possible they may not have much of a choice.

Merkel moves on: The CDU/CSU is holding party meetings to appoint a new party leader as Chancellor Merkel steps down.  If her selection, Annegret Kramp-Karrenbauer, is appointed, then Merkel will likely keep her post as chancellor.  However, if Friedrich Merz or Jens Spahn get the nod, then Merkel will probably be ousted.

Brexit update: There are rumors that PM May might delay next Tuesday’s vote, given that her plan will likely go down in defeat.  It’s starting to look like a second referendum is coming; we note that the leave supporters are preparing for a second vote.[10]

The large build was due to high refining activity, which remains at 95%, a 0.9 mbpd decline in crude oil imports and a 0.8 mbpd jump in exports.

The seasonal chart suggests the usual easing of inventory accumulation into year’s end has likely started. 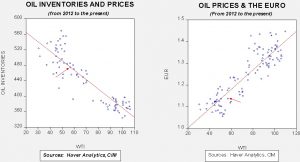 Based on oil inventories alone, fair value for crude oil is $59.93.  Based on the EUR, fair value is $54.60.  Using both independent variables, a more complete way of looking at the data, fair value is $55.73.  The data is rather bullish but prices failed to rally as sentiment was overshadowed by OPEC.  Reports indicate that the cartel has agreed to 1.2 mbpd of production cuts, but we have no details at this time.  Oil prices are rallying on the news.