[Posted: 9:30 AM EST] It’s another quiet morning, the day before the payroll report.  This is what we are watching:

Tax update: There’s not too much new to report other than there are rumblings of allowing the corporate rate to drift up by 200 bps.  Unfortunately, if negotiators accept a higher rate, Congress members are lining up to use the extra revenue for pet projects.  Negotiations remain difficult.  Equity market action suggests that investors are now taking a “wait and see” position, not willing to bid stocks higher until a deal is actually signed.

Continuing resolution: The government’s spending authorization will be hit tomorrow and it isn’t clear if there is a clear path to avoiding a shutdown.  The president is expected to meet with “Chuck and Nancy” at 3:00 EST today.  House Republicans want a spending package that will not raise any new spending on anything other than defense; needless to say, Democrats have other priorities, perhaps most importantly DACA.  Would a shutdown be an adverse outcome?  Only in the very short run.  As long as the continuing resolution process doesn’t hamper progress on taxes, we doubt the equity markets will mind.  However, it could be bullish for Treasuries and bearish for the dollar.

Putin’s running: No real shocker—Russian President Putin is running for a fourth term.  However, according to the Russian constitution, he cannot run for a 5th term (and, despite his attempts to project virility, in four years he will be 69 years old).  After the elections, we expect the beginning of a “feeding frenzy” on who will replace him after the next term ends.

BOJ tightening?  BOJ Governor Haruhiko Kuroda indicated today that the Japanese central bank is beginning the process of creating procedures to end the unconventional monetary policies designed to support the economy and end deflation.  Kuroda acknowledged that low rates are distorting the financial system and policy will need to tighten at some point.  We don’t expect this is a signal of imminent policy change but financial markets will tend to anticipate any adjustments.  The most likely outcome would be a stronger JPY.

Employment data: For tomorrow’s employment report, non-farm payrolls for November are forecast to rise 195k.  The U-3 unemployment rate is expected to remain unchanged at 4.1%.  Hourly earnings are expected to rise 2.7%.

This chart shows current crude oil inventories, both over the long term and the last decade.  We have added the estimated level of lease stocks to maintain the consistency of the data.  As the chart shows, inventories remain historically high but have declined significantly this year.  We also note the SPR fell by 2.4 mb, meaning the net draw was 8.0 mb.

As the seasonal chart below shows, inventories fell this week.  We are now well within the year-end seasonal draw.  As the new year starts, stockpiles begin their largest seasonal build from early January into early April.

Oil prices fell yesterday due to rising gasoline stockpiles.  Although the rise in stocks was large, up 6.8 mb, this is the period during the year when gasoline stocks rise. 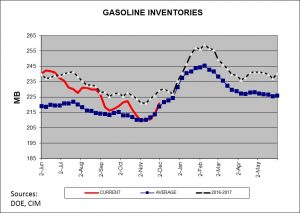 As the chart shows, gasoline inventories will likely rise into early February.  We are tracking last year closely. 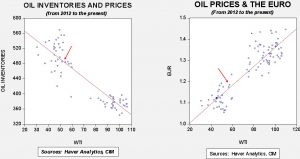 Based on inventories alone, oil prices are undervalued with the fair value price of $58.52.  Meanwhile, the EUR/WTI model generates a fair value of $64.68.  Together (which is a more sound methodology), fair value is $62.37, meaning that current prices have fallen under fair value.  Overall, oil prices are within normal ranges of current fundamentals but we are generally bullish toward crude oil at this time.