[Posted: 9:30 AM EST] It was mostly quiet overnight with the market’s focus on the aftermath of the Italian referendum.  The most relevant concern is the Italian banking system.  The lead headline in today’s FT is “Monte dei Paschi Warned to Brace for State Bailout after Renzi Defeat.”  Former PM Renzi had cobbled together a bailout plan worth €5.0 bn, contingent on winning the referendum.  With the vote’s failure, this bailout is probably not going to occur.

Under normal circumstances, a banking system crisis is usually addressed by the central bank providing liquidity to prevent a bank run, followed up by some sort of public recapitalization.  In the U.S., the Federal Reserve offered a series of packages (shown on the chart below) that allowed banks to sell assets (loans) to the government in return for liquidity. 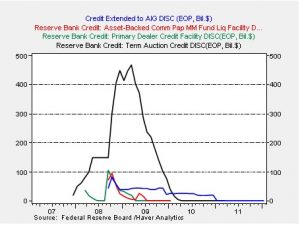 In the case of the U.S., the acute problem was liquidity, not solvency.  Thus, the $500+ bn injected into the banking system allowed the U.S. to get through the crisis.  As loan values recovered, the money was returned.  In Italy’s case, the loans are probably bad and so a recapitalization and workout is in order.  However, EU rules require that shareholders and bondholders get “wiped out” first before governments can supply funds.  Monte dei Paschi has €2.0 bn of retail bondholders who, based on EU rules, should suffer losses before taxpayer support.  However, these bondholders should be better thought of as depositors and hitting this class of creditors will be very unpopular politically.  Overall, the Italian banking system is holding €360 bn of bad loans.  If the lira were still around and the Bank of Italy had real power, the banking system would simply be recapitalized by the central bank; the central bank would be backstopped either by taxpayers or by printing money.  The most likely outcome would be the latter, which would lead to higher interest rates and a weaker currency.

However, by joining the Eurozone, this option is no longer available to the Italian banking system.  In fact, EU rules severely constrain the Italian government’s ability to deal with this banking problem in a politically acceptable manner.  One of the key goals of the Five Star Movement, a left-wing populist movement in Italy, is to hold a referendum on exiting the Eurozone.  If EU rules trigger a banking crisis (in other words, if the perception is that rigid German rules force small Italian bondholders to lose money), then the odds of a populist reaction to leave the Eurozone will increase.  We expect the EU to bend the rules to allow the Italian government some leeway in providing support because an Italian exit from the Eurozone would probably be the death knell for the single currency.

In other news, OPEC meets with non-OPEC members over the weekend.  Saudi Arabia has insisted on pledges of a 0.6 mbpd production cut from outside the cartel.  We expect some sort of agreement will be reached but would not expect any real cuts in output.  Already, Russia’s promised cuts of 0.3 mbpd will be “gradual” in the coming months and, since the OPEC deal only runs through June, it is quite possible that Russian production won’t fall at all in H1 2017.  Kazakhstan just opened the Kashagan field and will be reluctant to reduce output; in fact, its production is set to rise by 0.2 mbpd.  On the other hand, Oman, Bahrain and Mexico will all likely see falling output due to falling investment.  Overall, we expect the promised cuts to be made but no material reductions in output are likely.  However, if negotiations fail, the OPEC deal is probably off and oil prices would be vulnerable to a drop to pre-OPEC meeting levels.