It’s a “Seinfeld” equity market this morning—equity futures are advancing on nothing in particular.  Tory optimism is rising.  There’s a general strike in France.  U.S. is worried about Iran.  Here are the details:

Brexit:  The GBP has been steadily rising in the past few days on increasing optimism that the Tories will win a majority of seats in Parliament.  The opposition to the Tories remains hopelessly divided, with the Lib-Dems reiterating they won’t join a coalition led by Corbyn.  PM Johnson, is laying out an aggressive legislative agenda on his assumed victory.   Although a Tory victory is bullish for the GBP, the rally may be tempered by the next step in the process; once Parliament passes Johnson’s exit bill, the U.K. will need to start negotiations on a free trade agreement with the EU.  That won’t be pretty.  The general consensus is that a $1.35 GBP/USD is likely the target after a Tory win.  It’s quite possible we could get there before next week’s vote.

France:  The Macron government is proposing pension reforms; unfortunately, no one seems pleased with the plan.  So, in response, a massive general strike, the largest since 1995, is occurring today.  Transportation will be paralyzed, and large protest marches are planned.  We don’t expect the unrest to extend in time, but the strike will clearly grab the attention of the government.

OPEC and Saudi Aramco:  The Kingdom of Saudi Arabia (KSA) is expected to price its IPO on Saudi Aramco today.  Reports suggest $8.50 per share will be the going price.  The IPO is a scaled-down version of what was originally proposed but still large.  Meanwhile, the KSA needs a high price for oil for a successful IPO and support from OPEC+Russia is key to that effort.  However, perhaps a reflection of the youth of the Crown Prince, the Saudis are threatening a historic tool of punishing quota violators by flooding the market with oil and depressing the price of oil.  We don’t expect anything rash to occur in the near term; but, once the IPO is priced, it would not be out of character for the KSA to try to recapture market share.

Iran:  The U.S. has announced it is considering a significant boost in troop strength in the Middle East.  The administration is thinking about a 14k increase in soldiers along with more military hardware.  It is not clear what has prompted this consideration.  Israel has been expressing concern about Iran’s actions.  There are reports Iran has moved short-range missiles into Iraq; it is not exactly clear who is being targeted by these missiles.  Not to get overly “John Nash” but one cannot help but notice the proposed increase in troop strength and the threat by the KSA to flood the market with oil.  A sharp drop in oil prices would likely lift consumer sentiment in the U.S. in an election year.  However, it should also be noted that a lower oil price isn’t an unalloyed positive for the U.S. economy compared to a decade ago.  Iran may be escalating tensions in response to sanctions in an attempt to increase the risk premium in oil prices; the KSA could thwart that goal by raising output after the IPO.

Trade update:  China has reiterated that any Phase 1 deal will require tariff rollbacks.  The Senate is expected to approve a bill punishing China for its repression of the Uighurs, mirroring a similar bill recently passed in the House.  So far, these bills affecting Hong Kong and Xinxiang have not derailed trade talks, but they probably haven’t helped the process, either.  Treasury Secretary Mnuchin has expressed worries about an OECD effort to create a harmonized digital tax.  The U.S. dominates this space and thus the tax will probably have the most adverse impact on American firms.  Speaker Pelosi is pushing to remove legal protections for online content which is currently part of USMCA.  If she is successful, the tech firms will likely oppose the new NAFTA.

United States-North Korea:  The Chief of the General Staff of North Korea responded to President Trump’s threat of military force earlier in the week, saying the United States would face “horrible” consequences if it took any action against his country.  Although the dustup hasn’t been getting much coverage in the press, there probably is an increased chance of provocative North Korean military action as we approach the end of the year – Kim Jong Un’s deadline for making new progress in the U.S.-North Korea denuclearization talks.

U.S. Economy:  In a new Financial Times/Peterson Foundation poll, 61% of likely voters said this year’s stock market gains had little or no impact on their financial wellbeing.  Only 40% of respondents were even aware the market has risen this year.  The report is being presented as a sign that the market’s gains may not help President Trump’s reelection prospects as much as he thinks.

Germany:  Preliminary data shows German factory orders unexpectedly fell at the start of the fourth quarter.  After stripping out price changes and seasonal impacts, October manufacturing orders declined 0.4%, coming up far short of expectations for a small gain, and erasing much of September’s revised increase of 1.5%.  Compared with October 2018, orders were down a sharp 5.4%.  The figures call into question the recent sense that Europe’s economy might be bottoming out, so they’re likely to put negative pressure on European stocks today. 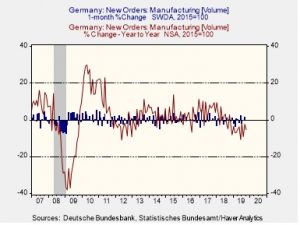 In the details, U.S. crude oil production was unchanged at 12.9 mbpd.  Exports fell 0.3 mbpd while imports declined 0.2 mbpd.  The rise in stockpiles was greater than expected mostly due to rising refinery operations.

This chart shows the annual seasonal pattern for crude oil inventories.  The autumn build season has come to a close and we would expect modest declines in inventory into year’s end. We continue to monitor the autumn refinery maintenance season.

This week’s rise is seasonally consistent, but utilization still remains below average.  Run rates should mostly stabilize into the new year.