Yesterday, trade worries with China led to a selloff.  This morning, optimism has returned and equities are higher.  Protests in Iran turn increasingly deadly.  Thoughts on the U.K. elections.  Here is what we are watching this morning:

Trade:  Yesterday, equity markets tumbled on comments from President Trump who indicated that a trade deal might not happen this year, and on reports from the commerce secretary that additional tariffs on China could be implemented on Dec. 15th.  Well, that was yesterday.  Today is today and optimism has returned.  First, media reports suggested that the president’s comments yesterday may have been nothing more than a bargaining tactic.  Negotiators for the U.S. and China indicate that talks are continuing and nearing an agreement.  Complicating matters is that the House passed the Uighur Act of 2019, which would call on the White House to attach sanctions on members of the CPC Politburo.  Although China has warned that if this bill becomes law, it will retaliate, if the Hong Kong bill is any indication, it won’t affect trade.

What do we make of all this?  We have noted that if the president really wanted to address the trade imbalance, which is really about saving and capital flows, he has had a couple of opportunities to address this issue systemically.  The first was during the tax reform discussions; there was a border adjustment tax that would have applied tariffs in such a way to equalize prices.  That idea never gained traction.  The second remains the Hawley-Ballwin bill, which we discussed in detail here and here.  The Competitive Dollar for Jobs and Prosperity Act would get at the heart of the problem by applying sanctions and capital flows, not trade. However, it would indirectly, but effectively, take trade policy away from the White House and give it to the Federal Reserve in the form of setting the exchange rate.  The reality is that the president seems more intent on making headlines and swaying policy by swinging market sentiment by how he talks about trade.  In other words, as Bloomberg’s Tracy Alloway noted, the lasting legacy of the Trump presidency may be the use of tariffs as a flexible policy tool.  Trump doesn’t really want to solve the trade issue directly; he wants to shape the behavior of foreign nations on an ad hoc basis with the use of tariffs.  Of course, what that means for markets is continued uncertainty.   Although this does keep the president’s name in the news, it does have a cost; investors have been building cash positions based on fears surrounding trade. 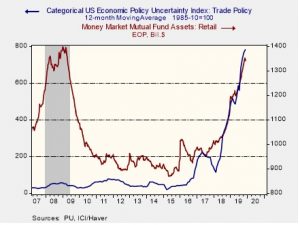 This chart shows the 12-month average of the trade policy uncertainty index[1] and retail MMK funds.  We started to see a strong accumulation of liquidity as trade concerns increased.  There are a couple of takeaways from this chart; first, despite rising cash levels, equity markets have moved higher but would likely be even higher in the absence of the trade tensions[2] and second, if the trade issue is resolved, or at least temporarily eased, a FOMO rally in stocks could be significant.

A few other trade items of note.  First, Japan has officially approved the U.S. free trade agreement.  Second, the Johnson government is apparently considering its own digital sales tax that appears similar to the controversial one passed by France.  We would not expect President Trump to bring up this issue with elections just over a week away, but if the U.K. proceeds with this plan, look for trade friction to rise with Britain.  Third, Mexico is balking at a demand from House Democrats to give U.S. inspectors the right to unilaterally investigate Mexican firms for labor law violations.  It is unclear if the USMCA can pass without this provision.  It is also unlikely that Mexico will approve such intrusive inspections.

Iran:  The gasoline protests have become increasingly deadly.  Reports now suggest that somewhere between 208 to 450 Iranians have died at the hands of state security.  Hard liners of the regime are trying to pin the unpopular price hikes on the Rohini government.  There are reports the Trump administration, viewing the unrest as a sign their sanctions policy is working, is considering additional sanctions.  The more desperate the Iranian government becomes, the more likely it is to at least consider attacking a neighbor to distract its unhappy Iranians.

U.K. elections:  As the poll looms on Dec. 12, we are seeing a few interesting developments.  There has been increasing discussion of “tactical voting” by the Remain camp.  The Remain parties are divided between the SNP, the Lib-Dems and Labour.  The idea is that voters who want to support Remain should vote for one of these parties in their districts with the best chance of beating the Tory MP candidate.  However, there are two problems with this concept.  First, it requires accurate polling.  In a vote for a Lib-Dem, a Labour and a Tory MP candidate, the Remain voter has to be confident that a vote for the Lib-Dem or the Labour candidate can overcome the Tory candidate.  If the polling isn’t definitive, the likely outcome would be to split the Remain vote and swing the seat to the Tory candidate.  The second problem is that even if the Tories are denied a majority, it isn’t obvious who would lead a SNP/Lib-Dem/Labour government.  The SNP is really only concerned with Scotland and thus would not provide the PM.  The Lib-Dem and Labour party agree on little, even on the Brexit issue.  The former wants to revoke Article 50 outright, while Labour wants another referendum.  Our base case is that tactical voting will fail, and the Tories will carry the election.

The second issue is that Labour has touted a document indicating that the Tories would allow the U.S. to dictate changes to trade laws that would undermine the National Health Service.  Reports have emerged that suggest this report may be nothing more than Russian disinformation.  This situation highlights something we may see next year in the U.S. presidential election; damming reports circulate that have no basis in fact but lead voters unsure what to believe.

[1] This index measures mentions of trade issues in the news media; it was created by Economic Policy Uncertainty.

[2] At the same time, one should treat that last statement with some caution; the Fed might have raised rates faster and higher in the absence of the trade issue.