(NB: Due to tomorrow’s National Day of Mourning and the closure of financial markets and the government, we will not publish the Daily Comment tomorrow.  We will return to our regular schedule on Thursday.)

Good morning!  The euphoria of yesterday has dissipated to some degree.  Here is what we are watching today:

Trade skepticism: As we noted yesterday, the lack of a unified communique after the Trump-Xi meeting led to both sides reporting different results.  President Trump has added to uncertainty with a tweet indicating that China has agreed to eliminate tariffs on U.S. autos.[1]  There isn’t any evidence (at least, not yet) that such a deal was made.  In addition, the White House has appointed Robert Lighthizer to lead upcoming talks with China.[2]  He is a hardliner on trade and his appointment to lead the talks, instead of Kudlow or Mnuchin, is a sign that the president intends to keep pressure on China.

As mentioned yesterday, the clock is working against President Trump, assuming he does want to be reelected.  If a recession is triggered next year, it will deeply weaken his chances of winning reelection in 2020.  It is obvious that trade worries are dampening the financial markets; the effects on the economy are still at the anecdotal level, but even this evidence suggests that the sluggish level of investment may be tied to trade uncertainty.[3]  The political calculation that the president might be making is whether the value of being hard on China is enough to offset a much weaker economy.  History suggests that a recession would be a death knell for reelection, but the situation with China is somewhat unique.  Our position is that the president should avoid recession at all costs, thus tamping down the trade issue for the next year or so would be prudent.  Appointing Lighthizer suggests that probably isn’t the president’s thinking.[4]

The chart below shows the election cycle with the current government.  To build this data, we take weekly data for the S&P 500 beginning in 1928 and index each four-year period to 100.  The blue line shows the average market performance.  The midterms occur near the end of the second full year.  Note that, on average, the market rises nearly 20% from late October of the midterm year into summer of the year before the election year.  This pattern isn’t an accident; presidents tend to “pump prime” the economy going into that year to help the reelection process.  President Trump has actually done the pump priming early, but that doesn’t mean he won’t continue the process.  We would not be at all surprised to see an infrastructure deal made to boost growth.  However, if the trade situation becomes a depressant on the economy, it could hurt his election chances.  That’s why it would be logical to ease up on trade, but just because it’s logical doesn’t mean it will happen. 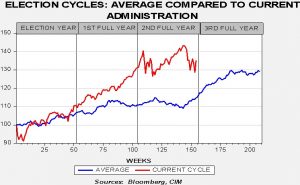 The yield curve: There have been some ominous developments in the interest rate markets in the past 72 hours.  First, the two-year/10-year T-note spread has dipped under 15 bps, nearing inversion.

Note that the two-year yield has been rising much faster than the 10-year yield.  This is consistent with policy tightening.  Second, the three-year/five-year T-note spread, which is much less monitored, has actually inverted.  The chart below shows a history of that data. 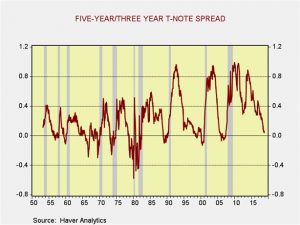 Although this spread gave a couple of false positives (e.g., 1965, 1998), it is generally reliable.  The FOMC is treading into difficult waters.

Given the reliability of the yield curve in predicting the business cycle, the financial media will enter a “hair on fire” moment with every pundit suggesting trouble ahead.  That isn’t to say that we won’t be concerned as well.  But, we offer a couple of caveats.  First, as we discussed in the June 29th Asset Allocation Weekly,[5] yield curve inversion doesn’t mean the equity markets immediately go negative.  In fact, using the 2/10 spread from the late 1960s, equities rise for about nine months on average after inversion and, in some cases, equities remain above the level at inversion for at least two years.  Thus, inversion is a real concern but may not be immediately negative.  Second, the general public’s increased focus on the yield curve may lead policymakers afoul of Goodhart’s Law, which states, “Any observed statistical regularity will tend to collapse once pressure is placed on it for control purposes.”[6]  We could very easily see the FOMC use the yield curve to guide policy and thus take the necessary steps to avoid inversion, upending the predictive value of the relationship.

Still, the near inversion is a worry.  The FOMC should pay attention to this and tread carefully.[7]

Brexit: In exactly one week, Parliament will vote on PM May’s Brexit deal.  The odds of passage appear slim; in fact, most observers now say the key is the level of defeat.  If the loss is close (< 30 votes), she may be able to go to the EU for adjustments to her deal to improve its odds in a second vote.  On the other hand, if the loss is overwhelming (>50 votes), then her plan is doomed as is her government.  We then enter a world of binary outcomes—we either get a hard Brexit with catastrophic losses for the GBP and British financial assets or a second referendum that may lead to no Brexit at all, which would trigger a large rally in the aforementioned assets.  Interestingly, the European Court of Justice ruled yesterday that the U.K. could unilaterally end Brexit, which increased the attractiveness of another referendum.[8]  We are leaning toward another vote; between a hard Brexit and a new vote the odds are probably leaning a bit toward the latter.

Macron backs down: The French government has suspended its fuel tax increase in the face of rising unrest.[9]  The FT has an interesting report on the incidence of Macron’s taxes.[10]  The report shows that the bulk of Macron’s tax benefits has gone to the richest segment of the income distribution, while the poorest have suffered significantly.  This outcome should not have been a shock; this is the essence of neoliberalism, the policies of Thatcher and Reagan.  The goal of such policies is to expand the supply side of the economy by rewarding entrepreneurship; it is implemented to contain inflation, not necessarily to spur growth.  Why Macron would seek to implement such changes now, nearly four decades after the inflation crisis has passed, is inexplicable. 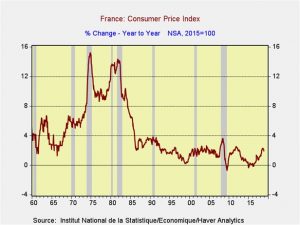 At the same time, it should come as no surprise that unrest has developed.

OPEC: The Saudi oil minister indicated this morning that a deal is not in place yet.[11]  That news has taken oil off its highs.  We still expect a deal to be made but talks continue.