[Posted: 9:30 AM EST] The big news is the tax reform bill passed by the Senate early Saturday morning.  Market response has been as one would expect—equities are higher, Treasury yields are rising and the dollar is up.  Here are the items we are watching this morning:

Tax bill: Our stance has been to avoid deep analysis of the bill until something is actually signed by the president.  This is because the bill is being written on the fly and what emerges in the final version will be much different from what is currently being discussed.  However, there is one factor common to both bills, which is that the fiscal deficit will rise.  We are not deeply concerned about this outcome and, in fact, would argue that the public sector should borrow more during private sector deleveraging.  When the government doesn’t borrow during private sector deleveraging, you get a 1930s outcome. 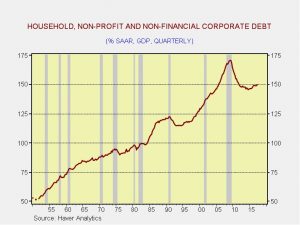 This chart shows non-financial corporate, household and non-profit debt scaled to GDP.  Debt peaked during the Great Financial Crisis and fell into 2014.  It has been rising modestly but a more fair reading is that debt levels are consolidating.  The real issue is deciding which fiscal stimulus is most effective for boosting growth—tax cuts or public investment?  Our position is that it depends on where the economy is at a given time.  If inflation is high with low growth, tax cuts are probably the best action because tax cuts should boost private investment.  If inflation is low along with low growth, public investment makes more sense.  Why?  High inflation suggests a lack of productive capacity and the best way to boost capacity is to foster private investment.  Low inflation indicates an excess of productive capacity so tax cuts probably won’t trigger new investment.  Thus, the tax cuts may simply be transfers to businesses and households that become spending or purchases of existing assets.

The ultimate problem with deficits is inflation.  As long as a nation services its debt in its own currency, default isn’t a problem.  There is an acknowledgement among the GOP that deficits may be a problem.  The answer appears to be to cut entitlement spending.[1]  President Reagan attempted this during the 1980s with little success.  It remains to be seen if it will work this time.  It should be noted that President Trump promised during his campaign that Social Security and Medicare would not be the targets of cuts.

Brexit talks: The EU and U.K. are engaged in Brexit talks today and there is evidence of progress.  Ireland and the U.K. have agreed on a border deal,[2] which was a major sticking point.  Last week’s “alimony” agreement also addressed a key problem.  The issue of EU courts in Britain remains unresolved, as does the fate of Europeans living in the U.K.  But, there is progress; we note the GBP is higher this morning, bucking the overall stronger dollar trend.

December 8th: The continuing resolution funding the government will expire on Friday.  Although we don’t expect a shutdown, we do expect the Democrats to only support a very short-term extension to keep the issue in the news and extract more of their legislative goals.  However, President Trump has indicated he thinks a shutdown would be blamed on his opposition and thus may be open to closing the government for a while.  A shutdown would likely ease some of the current bullish sentiment.

Bitcoin: The CFTC has approved cash settled futures contracts for the CME and CBOE for bitcoin.  This is an important development for cryptocurrencies mainly because now there will be an easy forum for taking short positions.  It should be noted that having the ability to short doesn’t necessarily mean that shorting will be successful.  The chart below shows the Nikkei 225 Index.  The vertical line shows when the joint Singapore/CME contract on the Nikkei 225 futures began trading.  The Nikkei peaked three years after the contract began trading.  Until then, shorting the Nikkei was a futile activity.  However, having a futures contract will allow participants to hedge their long positions and develop option strategies.  Although it may, over time, end the strength, it will also help stabilize the market and improve its legitimacy. 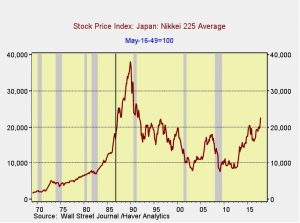 Richmond Fed: The Richmond FRB announced it has nominated Thomas Barkin as its new president.  Barkin is not a professional economist, although he does have an undergrad degree in the discipline.  He was with McKinsey as a consultant.  We expect Barkin will be confirmed (he would be confirmed by the Board of Governors, not the Senate).  For now, we would expect him to be a level “3” on policy; we have not been able to find anything on his monetary policy views, so he will likely develop them over time.