Trade worries continue to weigh on equity markets.  NATO meeting starts tomorrow.  Here is what we are watching this morning:

Trade:  The trade issue is getting increasingly messy and equity markets are falling.  Here are some of the issues:

For the financial markets, much of the recent rally in equities has been tied to some sort of truce on trade.  If that isn’t going to develop, the rally is at risk.  The trade conflict does appear to be having an impact on the economy.  The chart below shows the manufacturing PMI spread between the U.S. and China.  We have placed a vertical line at February 2018, when the trade conflict with China increased.  The ISM manufacturing index has declined relative to China since then. 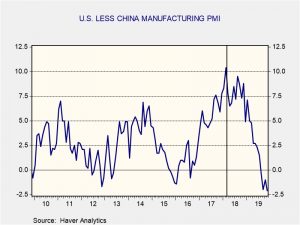 NATO:  Member nations are gathering in London for meetings starting tomorrow.  The treaty group is at some sort of crossroads.  French President Macron has been highly critical of NATO, calling the treaty organization “brain dead.”  President Trump has also criticized the EU for “free riding” U.S. defense spending. Additionally, Turkey has been unhappy with NATO, angry that the U.S. and EU opposed its actions against the Kurds.  Turkish President Erdogan is threatening to scuttle a plan to support the Baltics if NATO doesn’t declare various Kurdish groups as terrorist organizations.  NATO worked best when it had a clear adversary; some leaders are suggesting NATO should turn its focus to China.  China has suggested taking such a stance would turn the EU into a U.S puppet.  Meanwhile, PM Johnson simply hopes the meeting goes off without a bombshell that would hurt his election chances, as the vote occurs in nine days.

Iran:  The repression of protests over the recent increase in gasoline prices continues.  U.S. sanctions have not succeeded, so far, in bringing Iran back to the bargaining table, but they have clearly caused severe harm to the Iranian economy.

Russia-Germany:  Federal prosecutors in Germany believe Russian intelligence agents have carried out yet another extraterritorial assassination on a NATO member’s soil.  This time, the target was an ethnic Chechen-Georgian national who fought against Russia in Chechnya and was murdered in a Berlin park this summer.

Finland:  Prime Minister Rinne has resigned after losing the support of the Centre Party, a key coalition ally, over his handling of a postal strike that spread to other sectors before being settled last week.  If a new prime minister can’t be chosen from the existing coalition, there may be new elections that could bring the Eurosceptic Finns Party to power.

Japan:  Officials have provided more detail on the government’s planned fiscal stimulus package.  The package will total some ¥13 trillion (about $120 billion), almost all of which would be spent in the fiscal year beginning in April.  The stimulus could be a positive for Japanese equities, but it is likely to heighten concern about the country’s massive debt load.

China-Hong Kong:  The former chief economist for China’s state-owned Bank of Communications, Law Ka-chung, said he was forced to resign because he is a Hong Konger.  He also said mainland firms in the city are increasingly purging Hong Kongers and imposing strict censorship on them.  That suggests that besides China’s overt efforts to bring Hong Kong under closer control, there is also a creeping sinisization being carried out via commercial firms.  That’s probably a further headwind for Hong Kong stocks, on top of the continued anti-China political protests that have hurt the economy so much and the threat of a violent Chinese crackdown.

Brazil:  Adding to yesterday’s data suggesting a potential recovery in Chinese manufacturing, data today shows Brazilian GDP rose by a better-than-expected 0.6% in the third quarter.  Not only was that an improvement from the 0.5% rise in the second quarter, but it was also the best increase since the beginning of 2018.  Nevertheless, Brazil is still recovering only ploddingly from its painful 2014-2016 recession.  GDP in the third quarter was up just 1.2% from the same period one year earlier, far short of its average annual rise of 2.3% over the last two decades. 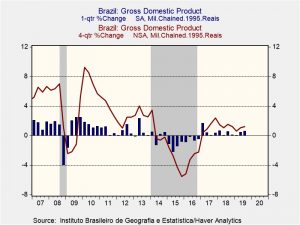 Odds and ends:  Sweden, long a champion of negative nominal interest rates, appears set to abandon the practice, concluding the policy is ineffective.  We are seeing an uptick in corporate bond defaults in China; it seems that financial authorities are willing to allow defaults, likely to reduce debt growth by injecting a bit of fear into lenders.  However, China is new to defaults (they weren’t legal until 2014) and we are watching to see if the financial system finds itself facing a cascade of bad corporate debt.  Although the Brent crude oil benchmark will live on, Brent crude oil itself appears to be coming to an end.  The last remaining wells are expected to be capped next year.

[1] France cannot implement trade actions by itself.  The digital services tax is a domestic tax structured to put the incidence on U.S. tech firms but it is not a trade action. For nations of the EU, trade rules are made at the EU level.