(Note to readers: The Daily Comment will go on hiatus next week after today; commentary will resume on January 2, 2018.  From all of us at Confluence, thanks for reading!  We wish you a Merry Christmas and Happy New Year.)

The big news was from Europe.  Here is what we are watching this morning:

Catalonia returns: Catalonia held regional elections yesterday and the results, though not completely conclusive, favored independence.  The coalition of parties that want separation won 70 seats, but Ciudadanos received the most votes and thus won the most seats, 37 out of 135.  Ciudadanos is a center-left party that opposes independence.  Of the top three parties in terms of seats in the regional parliament, the largest opposes independence while the next two support it.  Interestingly enough, the positions are becoming hardened; parties with no opinion on separation only won 9.1% of total votes compared to 13.1% in 2015.

To a great extent, this vote solved nothing.  It was a real political blow for PM Rajoy.  His center-right Popular Party only won three seats, a dismal showing.  This election suggests that a center-left government is probably the only hope for a national government that can keep Catalonia in Spain.  In addition, it isn’t clear how the separation coalition can govern.  Its leaders are in exile and face arrest if they return to Spain.  If new leaders emerge, Rajoy may simply arrest them too.

For the time being, Catalonia will be governed from Madrid until a new government is formed.  There is no obvious solution to the current impasse.  However, it appears to us that Rajoy probably won’t be the leader to resolve the problem.  The problem for the financial markets is that Ciudadanos is an unknown quantity; Rajoy has embraced austerity and can argue that it has worked to some degree.  The chart below shows Spain’s unemployment rate.  Although it remains elevated, at 15.1%, the trend is clearly going in the right direction.  The fear in the markets is that if Rajoy’s government falls on this issue, a left-wing government may reject austerity and put the Eurozone at risk again. 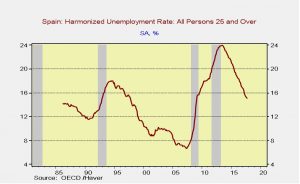 We will be watching to see if any of the established parties in Madrid decide to call a no-confidence vote and trigger new elections.  Currently, Rajoy is running a minority government so there is the potential for new elections, which would be bearish for the EUR and Spanish financial assets.

Government funding: As expected, Congress passed a temporary spending bill, but nothing was really resolved.  A whole host of issues will need to be addressed by January 19.