(Note to readers: We are suspending the Daily Comment next week, starting on Tuesday, December 27.  We will restart the report on Tuesday, January 3.  From all of us at Confluence Investment Management, we wish you a warm and blessed holiday season!)

There are reports out of Italy that the government will protect bondholders of the failing bank Monte dei Paschi di Siena (BMDPD, $8.70) after an attempt to raise capital failed.  The Italian government has created a €20 bn fund to support the banking system.  However, it is unclear how the Italian government can use this money to bail out bondholders and not violate EU banking regulations, which require shareholders and bondholders to be “bailed in” to any bank rescue before public money is deployed.  In Italy, bank bonds were often sold to households and marketed as forms of deposit.  If these bondholders are bailed in, they will take losses on their bonds; this creates a political crisis, at best, and a bank run, at worst.  Given the size of Italy’s economy and its political importance to the Eurozone, we would normally expect the rules to be bent to prevent a political crisis in the EU.  However, the Germans will be upset if the rules are ignored and with Merkel facing elections in the autumn of 2017 they may take a hard line on this bailout.  Thus, the potential for a political or financial crisis is rising due to this bailout.

The annual seasonal pattern suggests inventories should decline into year’s end.  This week’s data is inconsistent with that relationship.  Still, on a seasonal basis, inventories have declined more than usual. 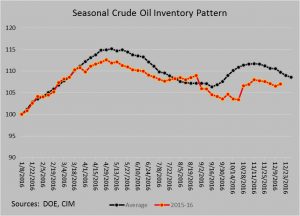 Based on inventories alone, oil prices are overvalued with the fair value price of $40.47.  Meanwhile, the EUR/WTI model generates a fair value of $35.82.  Together (which is a more sound methodology), fair value is $35.39, meaning that current prices are well above fair value.[1]  OPEC has managed to lift prices but maintaining these levels will be a challenge given the dollar’s strength and the continued elevated levels of inventory.