[N.B.  The Daily Comment will go on holiday from December 24 to January 2.  From all of us at Confluence, but especially Thomas and me, thanks for reading and have a Merry Christmas and Happy New Year!]

On Friday, December 14, we published our 2019 Outlook: Red Sky at Morning report.  If you missed it, you can find the report linked here or on our website.

There isn’t a whole lot going on this morning; most of the market commentary is a post mortem on the Fed.  We offer our views on the U.S. central bank below.  Equity markets are trying to rally this morning but oil prices are testing recent lows.  Here are the updates:

The Fed: Yesterday, we offered four outcomes from the Fed meeting.  Essentially, the FOMC split the difference between outcomes #3 and #4.  To recap, #3 was a hike with a clear signal of no further increases, while #4 was no change in the previous policy path.  What we actually got was a hike with a reduction in the path forward.

The yellow dots show yesterday’s meeting, while the gray dots show the meeting from September, the last time we had a dots plot.  The lines show the median rate path.  Note that there has been a cut of about 25 bps in the path for next year and 2020.  The statement had few changes, with the most significant being an acknowledgement of monitoring global and financial market conditions.  The economic projections were mostly unchanged; there was a modest increase in forecast GDP growth for next year to 2.5% from September’s 2.3%, while core PCE is expected at 2.0%, down from 2.1% in September.

The spread narrowed to just over 11 bps.  Equity markets fell; the decline from peak to yesterday’s low has now reached about 15.4%.  In general, a correction is 10% and a bear market occurs at 20%.  The latter is usually associated with recession.  Sentiment indicators are reaching levels that usually signal a washout.  If recession is avoided, the chances are elevated for a rally in equities.

At the same time, financial markets were clearly disappointed.  The Fed is dealing with what has been called the “Tinbergen dilemma,” named for the economist Jan Tinbergen, who first described it.  The dilemma describes when a policymaker faces two policy problems but only has one policy tool.  It is sometimes described as “trying to shoot two bad guys with one bullet.”  The Tinbergen dilemma can only be resolved if the two policy problems can be fixed by the same solution.  The Fed is facing an economy that is still rather strong (though momentum is clearly weakening), which supports tighter policy, and financial markets that are signaling increasing stress, which begs for easing.  What has the financial markets so upset is that there is evidence that, in the past, the Fed has tended to placate the financial markets when facing a similar Tinbergen dilemma. 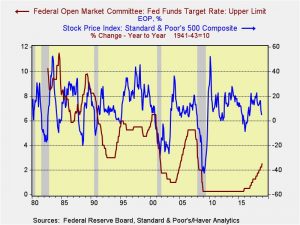 This chart shows the fed funds target with the yearly change in the S&P 500.  When the yearly growth in the S&P becomes negative, the Fed has tended to take notice.  Perhaps the clearest evidence of the Fed favoring financial markets was in 2000-04 when the Greenspan Fed kept cutting rates to what were historic lows at the time, even though the economy was recovering. 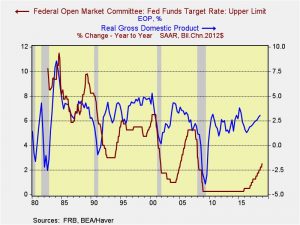 This chart shows the yearly change in real GDP.  Greenspan didn’t start raising rates even with GDP growth exceeding 4% in 2003, most likely due to continued weakness in equities.  In 2016, Yellen paused on rates as equities fell, but the economy has softened, too.

Essentially, financial markets have become accustomed to being favored when the aforementioned Tinbergen dilemma exists.  Powell is trying to weave a path that addresses both but, in reality, it looks like the Fed is more concerned about the economy overheating than it is about a weak stock market or a flattening yield curve.  This position increases the likelihood of a policy mistake, one of our four potential threats to the expansion we discussed in our 2019 Outlook.

So, what happens now?  Equity market valuations are improving and sentiment is becoming increasingly negative.  Both tend to favor a bounce at some point.  The proverbial “Santa Claus Rally” probably won’t happen this year, but we would expect a January bounce.

U.S. out of Syria: President Trump announced that the 2,000 U.S. troops in Syria will be leaving very soon.  The foreign policy and military establishment[1] is horrified at the prospect of having no influence in this part of the world.  The winners in this decision are Iran, Russia, Turkey and Assad.  The losers are Israel (due to the improvement in Iran’s position), Europe (will likely see a rise in refugees) and the Kurds.  The Kurds are especially harmed; they have supported U.S. efforts in this part of the world since the early 1990s when the U.S. began protecting northern Iraq with a no-fly zone.  However, now they will be subject to the tender mercies of President Erdogan.  The reaction from Washington is actually rather interesting; populists are applauding the president.  Even some former Obama officials are supporting Trump.  Meanwhile, establishment figures on both sides of the aisle oppose the move.[2]

What are the ramifications?  We will likely see the powers in the region turn on each other.  Iran will try to maintain its “Shiite arc” from Tehran to Beirut, while Turkey will attempt to contain the Kurds.  There will be conflict points between these two.  Israel will try to prevent Iran from projecting power.  Russia will likely try to manage the parties but we would not be surprised to see Moscow caught in a trap of maintaining peace.  Meanwhile, the likely chaos will help Islamic State revive.  Iraq will also be threatened by the ensuing conflict.  The problem for the U.S. is that the commitment is never-ending.  Trump, like a true Jacksonian, sees no reason why the U.S. should concern itself with the region.  The consequence is that the region will likely descend into chaos.

At the same time, it is important to remember that the last three presidents have struggled to craft a working policy for the Middle East.  President Bush made a critical error by removing Saddam Hussein from power without being able to replace him, creating a power vacuum in the region that still hasn’t been filled.  President Obama tried to extricate the U.S. from the region by putting Iran in charge; although a defensible policy, it was far from ideal.  President Trump reversed the Obama-era Iran policy but found that none of the other parties in the region can stabilize it.  It appears that U.S. policy is now to allow the chips to fall where they may.  This policy will allow one of the three frozen conflict zones to thaw; how this works out is anyone’s guess but we doubt it will be smooth.  The primary market beneficiary will likely be oil.

In the details, estimated U.S. production was unchanged at 11.6 mbpd.  Crude oil imports and exports were essentially unchanged, while refinery runs rose a modest 0.4 mbpd.

The seasonal chart suggests the usual easing of inventory accumulation into year’s end is underway.  Inventories usually decline into the new year.

Based on oil inventories alone, fair value for crude oil is $60.35.  Based on the EUR, fair value is $54.30.  Using both independent variables, a more complete way of looking at the data, fair value is $55.70.  By all measures, current oil prices are undervalued.  Although fears of a weaker global economy do play a role in price weakness, it appears that even modest action by OPEC to restrict output should lift prices to the mid-$50s in the coming weeks.