[Posted: 9:30 AM EST] Happy employment data day!  We cover the report in more detail below but, in a nutshell, the big surprise was a drop in the unemployment rate to 4.6%, the lowest since August 2007.  The unemployment rate fell due to a 266k drop in the labor force, meaning the employment/ population ratio remained steady at 59.7%.  Despite the apparent tightening of the labor market, wage growth remains stagnant, with the growth rate of hourly earnings for non-supervisory workers holding steady at 2.4%.  Over the past three business cycles, an unemployment rate this low has coincided with wage growth near 4%.  Market reaction has been modest; the data won’t change the likelihood of a Fed rate hike later this month.

Two major political events will occur this weekend in Europe.  First, the Italians are holding a referendum on streamlining government.  PM Renzi has staked his political future on securing a “yes” outcome.  At present, that looks like a bad move on his part.  Although Italian law makes it illegal to poll two weeks before an election, polling has suggested that the referendum will probably be defeated.  However, polling firms have not enjoyed much success lately and it would be consistent for them to be wrong here.  We do note that polls have indicated strong opposition in southern Italy, which tends to have low turnout.  We are expecting a rejection of the referendum and Renzi’s resignation, but we do caution that 2016 has been nothing but surprises so an unexpected outcome is still possible.

If the referendum fails and Renzi resigns, the odds of early elections will rise.  Both the Five Star Movement party and the Northern League are calling for a referendum on EMU membership.  Italian support for the Eurozone and the EU isn’t very strong and there is good evidence to suggest that the Italian economy needs a steadily weakening currency to function.  For example, using the leading indicators (LEI) as a proxy for growth, the average yearly change in Italy’s LEI prior to 1999 (the onset of the EMU) was 3.2% per year.  Since joining the Eurozone, LEI growth is a mere 0.2%.  The chart below shows the lira/DM exchange rate. 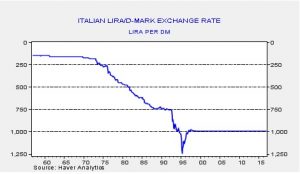 The Italian lira steadily weakened against the D-mark until the rate was fixed in the single currency.  Since Italy lost its ability to depreciate its currency against the D-mark, its economy has stagnated.  Thus, pressure to exit the single currency makes sense; on the other hand the chaos that action would bring would be immense.  If the referendum on Sunday fails and Italy moves toward exiting the Eurozone, Germany will face a difficult choice.  The Merkel government will either need to accommodate Italy’s needs by expanding consumption and running current account deficits within the Eurozone or watch the single currency break apart.  Although Sunday, by itself, won’t determine this outcome, it isn’t a far stretch to see this scenario developing.

The other vote is for a mostly ceremonial position of president of Austria.  Norbert Hofer, a right-wing populist who narrowly lost a similar election earlier this year that was thrown out due to voting irregularities, is trying for a second time to win this post.  Current polling has the race too close to call.  If Hofer wins, it would be the first right-wing government in Austria since 1945.  It would also claim yet another nation for the populists.

Finally, the French will vote for a new leader next spring.  The current president, François Hollande, will not run for another term.  This is the first time in postwar history that a French president has not run for another term.  It is likely that Manuel Valls, the current PM, will represent the Socialists against François Fillon from the conservative parties and Marine Le Pen from the National Front.  The final round will be held in May of next year.  Hollande’s approval ratings have been abysmal and he probably would not have survived the primary.  Current polls suggest that Fillon will face Le Pen for the presidency after the first round (in France, the first round eliminates all but the top two vote gatherers who then run in the final election).  Fillon is running as a right-wing supply side candidate, while Le Pen is a right-wing populist.