N.B.  A couple of items.  First, the Daily Comment will go on hiatus from Dec. 23, 2019 to Jan. 1, 2020.  Publication will resume on Jan. 2, 2020.  Second, the fifth episode of the Confluence of Ideas podcast has been posted.  “Arriving at Decisions” examines the issues that surround making decisions under conditions of uncertainty.

Good morning, possibly at the dawn of a new era of non-negative interest rates . . . or at least that’s a possibility given today’s news out of the Swedish central bank, as discussed below.  There’s also more evidence that any end to the world’s negative interest rates may be matched by a revival of fiscal stimulus.  Here’s what we’re watching today:

Sweden:  In a sign that the era of negative interest rates may be ending, today the Swedish central bank raised its benchmark short-term interest rate to 0% from -0.25% previously.  Even though Swedish economic activity has been cooling in recent quarters, the policymakers justified the rate hike by citing the widespread worry that negative rates, which have prevailed in Sweden since 2015, could be distorting the financial markets and might be encouraging undue risk-taking.  The policymakers indicated they would be open to cutting rates again if necessary, but they said the more likely scenario would be for rates to stay at 0% for a long time, especially since inflation-adjusted rates remain sufficiently negative to support growth.  European bonds are selling off and yields are rising on concerns that the Swedish move could be the beginning of a trend, even though the Bank of England today held its benchmark rate steady at 0.75%, and the Bank of Japan held its key rate at -0.1%. 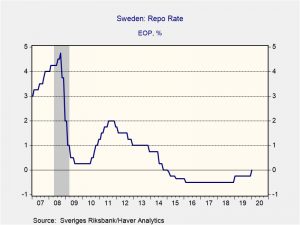 European Union:  Even as the era of negative interest rates may be ending, we’ve been noting a gradual shift in policymakers’ openness to looser fiscal policy, i.e., increased government spending, wider deficits and increased debt.  The latest evidence of that came today in a speech by the EU’s new economics Commissioner Paolo Gentiloni.  In the speech, Gentiloni warned that the EU’s strict budget rules, if they were fully enforced, would be inconsistent with the region’s current low-growth, low-inflation environment.  According to Gentiloni, “it may not be a problem in a normal macroeconomic environment, but, as I have said, the conditions that we are living through are not normal.”  Gentiloni also said he would begin a review of the EU’s deficit rules in early 2020.  Coupled with Bundesbank President Weidmann’s recent warning against a balanced-budget “fetish” in Germany and the return to fiscal stimulus in Japan, this could well be a trend worth watching.  Looser fiscal policy would likely help boost growth in developed countries in the near and medium terms, though with increased debt risk over the longer term.

France:  Seeking to end the mass protests and strikes against his proposed pension reform, President Macron said he would be open to delay boosting the retirement age to 64 from the current 62 if another way can be found to balance the books.  Government officials have been discussing the idea with union leaders yesterday and today.  We view the proposal positively because even if the age provision has to be delayed in order to end the protests, the rest of the reform is focused on providing much-needed simplification and efficiency.

United Kingdom:  Former shadow foreign secretary Emily Thornberry said she will be a candidate to replace Labour Party leader Corbyn.  At least two other shadow ministers, Keir Starmer and Rebecca Long-Bailey, are expected to throw their hats into the ring in the coming days.  While Labour will be in no position to exercise much influence in the new parliament, its focus now will be on how to rehabilitate itself for the future.  The key question that party members are mulling over is whether to stick with Corbyn’s radical agenda or shift to the center.

China:  Even as the markets have rallied on the easing of U.S.-China trade tensions (including China’s announcement today of tariff exemptions for certain U.S. chemical and petroleum goods), it’s important to remember that China is still working to assert itself in other spheres.  This week, the Chinese navy commissioned its first domestically-built aircraft carrier, the Shandong.  New reporting indicates that in the event of war with Taiwan, the Shandong is primarily meant to bottle up U.S. bombers in Japan and Guam while China’s other carrier, the Russian-built Liaoning, provides air superiority over Taiwan itself. 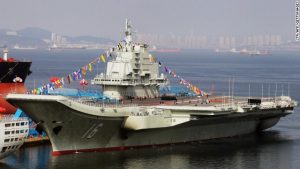 Russia:  President Putin today is holding his annual marathon news conference.  In noteworthy statements so far, Putin refused to say whether he might try to stay in power beyond the official end of his term in 2024, and he defended the recent law that he signed to deem certain media outlets as “foreign agents.”

India:  Protests against Prime Minister Modi’s new citizenship law continue, prompting the government to shut down communication services and prohibit public gatherings in locations around the country.  Police have reportedly arrested hundreds of protestors, but it still looks like the pushback against the law is limited mostly to Muslims.  The government’s clamp down on communications and public gatherings therefore has a good chance of keeping the tensions under control.  As if to confirm that, Indian stocks rose to yet another record high today.

United States-South Korea:  U.S. and South Korean negotiators failed to reach an agreement on cost sharing for the U.S. troops stationed in South Korea, but the U.S. side hinted it would no longer stick to President Trump’s demand that Seoul quintuple its contribution to $5 billion per year.  If the U.S. side backs off that number when the negotiators next meet in January, it would likely help improve relations between the two countries, and allow them to focus more strongly on the reviving threats and provocations from North Korea.

U.S. Investment Regulation:  Yesterday, the SEC approved a proposed rule that would expand the number of people allowed to invest in private securities, private equity funds and hedge funds.  For example, the rule would allow such investments by people with a basic broker’s license, even if they don’t meet the annual income threshold of $200,000 or the net assets threshold of $1,000,000.

In the details, U.S. crude oil production was unchanged at 12.8 mbpd.  Exports rose 0.2 mbpd while imports fell 0.3 mbpd.  The decline in stockpiles is near expectations.

This chart shows the annual seasonal pattern for crude oil inventories.  The early winter draw season is underway and will continue into early 2020.