[N.B.  The Daily Comment will go on holiday from December 24 to January 2.  From all of us at Confluence, but especially Thomas and me, thanks for reading and have a Merry Christmas and Happy New Year!]

BREAKING NEWS: The U.S. is preparing to make an immediate and full withdrawal of troops from Syria.  We will discuss the ramifications in tomorrow’s comment.

On Friday, December 14, we published our 2019 Outlook: Red Sky at Morning report.  If you missed it, you can find the report linked here or on our website.

It’s Fed day!  Equity markets are trying to rally this morning and oil prices are steady despite bearish API data.  Here is what we are watching today:

The Fed: There are four likely outcomes from today’s meeting.  Here is the lineup: 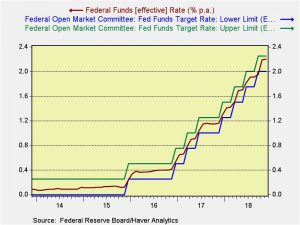 The highest probability outcome is #3, although we would not discount a fairly high probability of #2.  Here’s why: 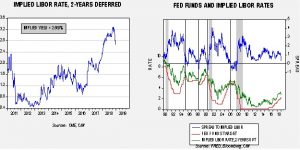 The chart on the left shows the implied three-month LIBOR rate, two-years deferred, from the Eurodollar futures market.  Note how the rate has fallen sharply since peaking in late October (around the time Chair Powell said we were “a long way from neutral”).  The chart on the right shows that this rate tends to act as a policy marker.[1]  When the fed funds target is higher than the implied LIBOR rate shown on the right, the Fed tends to stop raising rates.  Alan Greenspan was able to extend the 1991-2001 expansion by deftly adjusting to this implied LIBOR rate (there is no evidence that he actually used this rate in setting policy, but it is uncanny how close it was followed).  The spread has narrowed from 125 bps in late September to 29 bps now, implying one hike after today.  And, the implied LIBOR rate is falling rapidly, which could mean even that rate might be scuttled.  The above chart should signal to the FOMC that they are close enough to neutral so as to pause.

Italy makes a deal:Italy has come to a deal with the EU, averting the potential for a crisis.[2]  This agreement reduces the odds of an immediate crisis but the underlying issues have not been resolved.  Thus, we will revisit this issue again.  But, for now, this is good news.

[1] We have assumed a 25 bps rate hike today in the spread calculation.