Late last week, China captured a U.S. research drone operating in what appeared to be international waters.  Although there were concerns that this event would escalate, according to reports, the Chinese have agreed to return the drone after the U.S. filed an official protest.  We view this as China’s way of retaliating against President-elect Trump taking a call from Taiwan’s president.  If so, this was a low risk way of getting America’s attention.  By taking a drone, there were no human lives at risk and giving the vessel back keeps the situation from escalating.  At the same time, we expect China to signal that it will respond to all hostile U.S. actions, a warning to the incoming administration that it will not merely acquiesce to actions it deems unfriendly.

President-elect Trump selected Congressman Mick Mulvaney (R-SC) as head of the Office of Management and Budget (OMB) over the weekend.  Mulvaney is a staunch fiscal conservative, a supporter of entitlement reform, which is the opposite of what Mr. Trump’s campaign promised.  We have been framing the Trump presidency as Speaker Ryan v. Advisor Bannon.  For the most part, the picks so far have favored Ryan, suggesting the GOP establishment is mostly co-opting the incoming president.  That doesn’t mean the populist cause is lost but he hasn’t selected cabinet and department heads that support Trump’s platform. Although financial markets will tend to support these establishment figures, we still believe the wave of history is in favor of the populists.  If Trump fails to satisfy this group, he may return to being a private citizen in 2020.

Finally, there are a couple of Fed items worth noting.  Chair Yellen is giving a commencement speech today.  We would not expect any policy news to emerge from her comments.  St. Louis FRB President Bullard, thought to be the low dots on the dots chart, indicated that the Fed should begin the process of shrinking the balance sheet.  This is not a dovish act and would be taken as further policy tightening.  It is worth noting that the Fed’s balance sheet is already falling relative to the size of the economy. 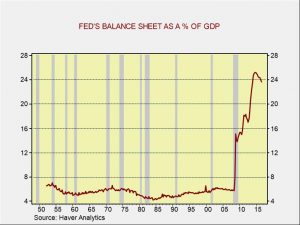 After peaking at 25.2% of GDP, the balance sheet is now at 23.6% of GDP.  If the Fed merely stops reinvesting expiring debt, the balance sheet will steadily shrink; for example, about $44 bn of Treasury holdings alone mature in 90 days or less.  We expect the Fed, once it decides to reduce the balance sheet, will shrink it by allowing it to unwind through maturation, not by active sales.  If this is the case, the balance sheet would become more weighted in mortgages, which have a longer term maturity profile.