Good morning, all. So far, the overnight news has been relatively mum as fears of an ongoing trade war appear to be dissipating. Meanwhile, rising concerns of a “hard” Brexit have weighed on the pound. Below are the stories we will be following today:

Weaker dollar in 2020: Following the agreement of the “phase one” trade deal, there has been a growing consensus that the U.S. dollar will likely weaken in the coming year. As we have written in previous reports, one of the setbacks of imposing tariffs is that it generally leads to currency strengthening. There are a few possible explanations for this:

That being said, a rollback of some tariffs should lead to a weakening of the dollar as investors attempt to move away from U.S. assets, which are generally considered havens. Furthermore, if this trend persists it will likely be bullish for foreign equities. 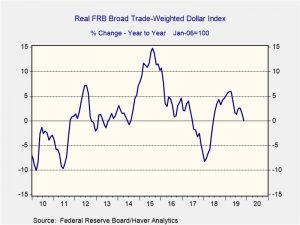 The chart above shows the year-over-year change in the Real FRB Broad Trade-Weighted Dollar Index. The index measures the strength of the U.S. dollar relative to the currencies from 26 of the country’s most important trading partners. The trend spiked in the beginning of the year but has been slowing down since April.

China agriculture purchases: There are growing concerns that the partial trade pact may not live up to expectations. In the trade pact, China has agreed to purchase at least $40 billion worth of agricultural products annually over the next two years; this would almost double its largest purchase order of nearly $25 billion in 2013 and 2014. The biggest concern about the deal is that it has not been formally put on paper; therefore, it is difficult to discern where China will make purchases. Despite the need for pork and soybeans, skeptics wonder whether China has a need for $40 billion worth of agricultural goods and may try to make up for it by purchasing non-agricultural products such as crude oil and natural gas. At this time, the formal written agreement is under review, so the commitment has yet to be finalized. Nevertheless, unless there is something in the agreement that leads investors to believe this deal will not hold, we expect the agreement to have little effect on equities.

Fears of manufacturing slowdown: Despite the reduction in global trade tensions, there are growing fears that manufacturing production will not pick up as fast as many would hope. On Tuesday, Boeing (BA, 327) announced that it will be halting its production in January of one of its flagship products, the Boeing 737 Max, as it undergoes regulatory reviews following crashes of two of its planes. Arguably the biggest U.S. manufacturing exporter, the company’s decision to halt production is expected to have an impact on the economy. Earlier this year, the company reduced its production of the plane from 52 per month to 42, resulting in a slowdown of durable goods orders. Accordingly, the halt is expected to result in a slowdown in inventory accumulation for Q1 2020 but will likely spike whenever the company decides to restore production.

Odds and ends: The U.S. has given up its efforts to stop the Nord Stream 2 gas pipeline. Brazilian equities have been hit due to concerns about the country’s economy. Data released by the BLS showed that many of the counties the president carried in the 2016 election were arguably in recession at the time.