[Posted: 9:30 AM EDT] On Friday, December 14, we published our 2019 Outlook: Red Sky at Morning report.  If you missed it, you can find the report linked here or on our website.

U.S. equity futures are lifting this morning after another hard decline yesterday.  Oil prices are falling, with WTI trading under $50 per barrel.  Here are the details:

Equities (again!): We are seeing a bit of a bounce this morning but there are no guarantees it will hold.  The pattern for the past six weeks has been that rallies have mostly failed; investors appear to be using every rally to reduce equity exposure.  As we showed in yesterday’s comment, retail investors have been rapidly building cash levels.  We see two immediate worries—a policy error by the FOMC and a trade war.  Although the first worry is legitimate, it does appear the FOMC is aware of its situation and is likely to signal a pause in its policy path after a rate hike tomorrow.  There has been much focus recently on the balance sheet reduction.  Our position has been that the primary impact of the balance sheet expansion was psychological.  It signaled that the central bank was not out of policy tools even at the zero bound of interest rates.  But, most of the expanded balance sheet went to banks in the form of excess reserves.  Withdrawing those reserves shouldn’t have much actual impact.  Still, if the FOMC signals any slowing of the balance sheet contraction, it would be taken as a bullish signal.

The second issue is a serious concern as well.  The trade war with China is a symptom of the much larger trend of deglobalization.  To a great extent, the rise of populism is a visceral reaction against global integration in all its forms, including trade, immigration and social relations.  Although understandable, the problem is that globalization was a key component of inflation suppression.  If the world moves away from economic integration, inefficiency will rise and inflation will as well.  Rising inflation may be a cost that the majority of citizens in the West are willing to pay for regaining control over their lives but, over time, the cost will prove to be substantial.

However, in the short run, we expect a truce of sorts on deglobalization.  President Trump would likely prefer reelection (presidents rarely turn down the chance for a second term), so making peace with China for the next year makes sense.

Given the degree of weakness seen in equities, we would expect a recovery in the next few weeks.  As the money market chart from yesterday showed, the lift could be rather robust if sentiment shifts.  Overall, the U.S. economy is doing fine; we look for slower growth in 2019 but no recession appears likely.  The world economy is sluggish and that issue probably remains next year.

China: China is celebrating its 40th anniversary of market reforms started by Deng.  In a speech[1] at the meeting, Xi pressed the centrality of the Communist Party of China (CPC), giving no indication of any relaxation of policy to expand market reforms.  The CPC under Xi will maintain control even as the economy slows; reports suggest the growth target for 2019 will be between 6.0% and 6.5%, down from the current target for this year of “around 6.5%.”  There was hope Xi would unveil economic stimulus.  It wasn’t mentioned in the speech, suggesting China won’t take steps to boost the economy over current measures. 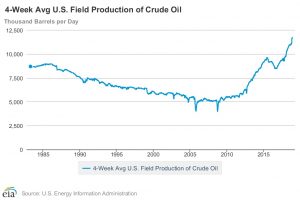 U.S. oil production is now up to 11.6 mbpd.  Although the recent drop in oil prices will eventually lead to reduced output, the process will take a while.  In recent years, there is about a 10-month lag between price changes and changes in production.  Thus, the recent drop in prices will tend to affect production in the summer of 2019.  Second, worries about demand are surfacing due to weakness in the global economy.[2]  China’s lack of new stimulus, noted above, adds to this concern.  Third, oil is considered a risk asset; as equities decline, oil prices have been similarly affected.

On the other hand, the U.S. isn’t the only producer in the world.  OPEC is cutting output and Russia has indicated it will reduce output, too.[3]  Global growth is a worry but if the U.S. avoids recession, as we expect, then demand should not fall precipitously.  Finally, oil prices should participate if risk assets rally.  Based on inventories and the dollar, oil prices should be in the mid-$50s at a minimum.  Therefore, we view the drop in oil prices as overdone and a recovery in the coming weeks is likely.