Good morning on a busy Thursday (and a snowy one for our friends in the Northeast).  Equity futures are up this morning, while the dollar is down sharply and gold and bitcoin are higher.  In fact, bitcoin broke $20k, supported by comments that it is deeply undervalued.  Our coverage starts with the Fed, including an analysis of the interaction of the Fed, the Treasury, and the yield curve.  Up next is the forex market and the Treasury announcement that Vietnam and Switzerland are currency manipulators.  The EU passed its budget and is thinking about a “bad bank” to absorb nonperforming loans; Brexit appears close.  China news is next, followed by pandemic coverage.  We close with a roundup of policy and economic news.  Being Thursday, our Weekly Energy Update is available.  A note to readers—the Daily Comment will go on holiday hiatus starting Dec. 23 and return on Jan. 4.  Here are the details:

The Fed:  To some extent, the meeting was modestly hawkish.  The dots plot suggested a greater openness to rate hikes in 2023.

The sole rate hike forecast for 2022 did come down 50 bps but we added another member to hikes in 2023.  The majority are still holding to no rate hikes for 2021-23.  The FOMC also increased its expectations of this year’s GDP growth, from -3.7% in September to -2.4% at this meeting, and there were modest upward revisions to future years.  Unemployment is expected to decline more quickly as well.  But inflation won’t hit its 2% target over the forecast period.  There was no change to the allocation of purchases but the Fed did suggest it would continue QE for a long time.  Financial markets seemed to express some disappointment.  The dollar rallied a bit and equities were mixed, with non-cyclicals doing better than cyclical sectors.  Although the Fed dashed hopes of additional support (there was speculation the Fed would boost purchases at the long end), overall, this was mostly a steady policy outcome.  We expect Governor-appointee Waller to be sworn in for the next meeting, meaning we will have another dot on the plot.

A bit of “inside baseball”—the yield curve has steepened lately, leading to comments that the market is expecting a stronger economy going forward.  Although that may be the case, the steepening may have more mundane origins.  It starts with the Treasury.  It has been building its account at the Fed by issuing lots of T-bills.  Most likely, Mnuchin was worried about a government shutdown and was prefunding stimulus.  In any case, we have seen a sharp rise in the Treasury’s account at the Fed. 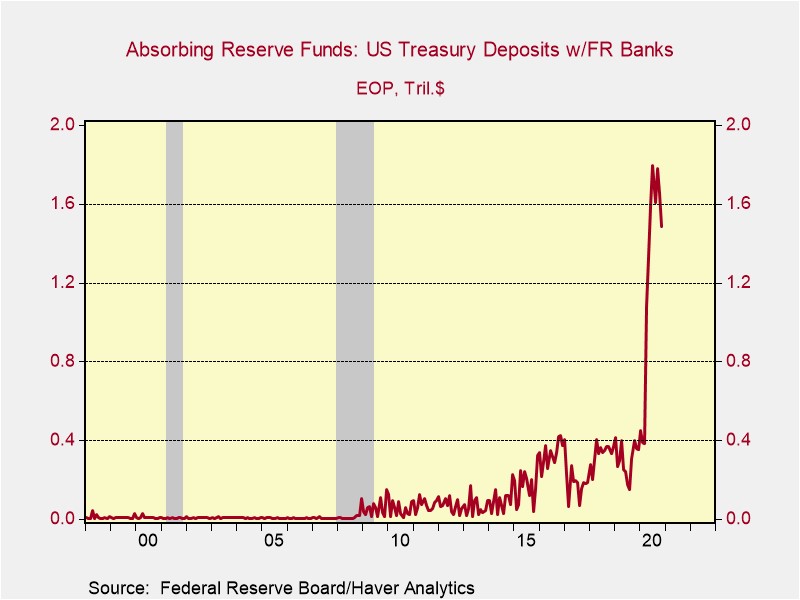 As the Treasury issued T-bills to fund this hoard, it has led to a drop in the average maturity of Fed holdings; last year, it was 70 months.  It has fallen to 62.5 months.  And, over the past decade, rising maturity coincided with the two-year/10-year yield curve. 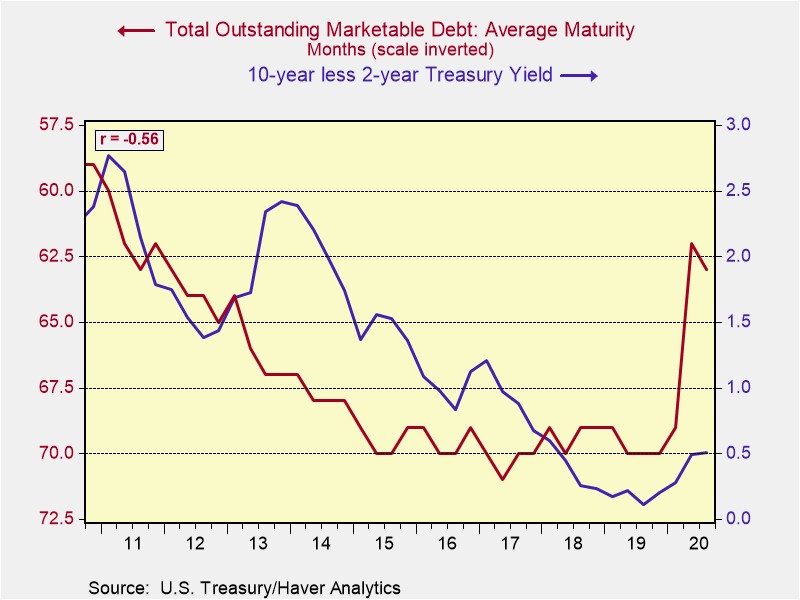 As the Treasury draws down this account to fund stimulus (and assuming a funding bill passes this week), there will be pressure for the yield curve to flatten.  Stay tuned.

Forex:  The Treasury has a formal process to establish if a country is manipulating its currency.  The process seeks to determine if a country is preventing the appreciation of its currency to run a larger trade surplus with the U.S. than it would otherwise.  The U.S. announced yesterday that Vietnam and Switzerland are being named “manipulators.”  The designation will trigger a process where the U.S. engages with the countries in question to address America’s concerns.  If the negotiations don’t yield a satisfactory outcome, the U.S. can apply trade restrictions.  The case for Switzerland is straightforward—it intervenes regularly to prevent the appreciation of the CHF, but it has nothing to do with the U.S.  Without intervention, the CHF would appreciate against the EUR, making Switzerland less competitive within Europe.  So, there is no doubt Switzerland intervenes, but it isn’t to improve its position with the U.S.

The case of Vietnam is more complicated.  It has become a destination for productive capacity that is leaving China to land.  And so, almost by design, it has seen its current account expand.  We would expect some appreciation of the Vietnamese dong, but most likely it will be modest.  The action by the Treasury, though, may be signaling a greater openness to a weaker dollar, which is the goal of this policy.

The EU:  The EU budget has passed the European Parliament, meaning the Eurobond will be issued in the coming months.  This is a remarkable achievement and will support further integration of Europe.  We never thought Germany would accept this idea; a Eurobond will allow Italy to borrow in EU credit, something that has always terrified Berlin.  But, here we are!

Brexit:  According to reports, we are getting close to a Brexit deal.  In fact, the last sticking point may be fish, which should be manageable.  Both sides are still taking steps just in case talks fail.  One sign that we are close is that Parliament may reconvene from their Christmas break to vote on the treaty.  Another sign?  The GBP has been on a tear based on Brexit optimism.

China:  A new look at rebalancing and tensions with Australia rise further.

COVID-19: The number of reported cases is 74,372,756 with 1,652,117 fatalities.  In the U.S., there are 16,984,580 confirmed cases with 307,543 deaths.  For illustration purposes, the FT has created an interactive chart that allows one to compare cases across nations using similar scaling metrics.  The FT has also issued an economic tracker that looks across countries with high frequency data on various factors.  The Axios map is showing improvement in cases.