[Posted: 9:30 AM EST] With the release of CPI data, we can update our versions of the Mankiw rule model, incorporating the recent rate changes by the FOMC (we assume December’s data will be close to November’s releases).  This model attempts to determine the neutral rate for fed funds, which is a rate that is neither accommodative nor stimulative.  Mankiw’s model is a variation of the Taylor Rule.  The latter measures the neutral rate by core CPI and the difference between GDP and potential GDP, which is an estimate of slack in the economy.  Potential GDP cannot be directly observed, only estimated.  To overcome this problem, Mankiw used the unemployment rate as a proxy for economic slack.  We have created four versions of the rule, one that follows the original construction by using the unemployment rate as a measure of slack, a second that uses the employment/population ratio, a third using involuntary part-time workers as a percentage of the total labor force and a fourth using yearly wage growth for non-supervisory workers. 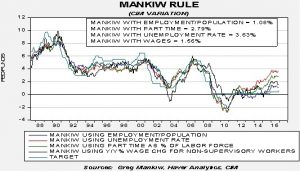 It is still uncertain which of these variants best reflects slack (or lack thereof) in the economy.  Although we tend to think that wage growth or the employment/population ratio is the best measure of slack, the key is what policymakers view as the most consistent with measuring slack.  At this point, we don’t know, although we think the hawks are probably relying on the unemployment rate variant while the chair probably believes the involuntary part-time employment variant is the best measure.  The involuntary part-time employment variant is most consistent with six rate hikes over the next 24 months.  That path would bring the policy rate near neutral; however, if they are wrong and, for example, the employment/population ratio is actually correct, then policy will be overly restrictive (assuming that ratio doesn’t improve dramatically).  Thus, the FOMC is moving rates higher in a slow fashion to allow them time to adjust if it turns out there is more slack (reflected by the lower neutral rate variants) than some data would suggest.  Of course, by going slow, assuming the higher neutral rate variants are correct, the Fed could keep policy overly accommodative longer than it should.  As long as the economy remains globalized and deregulated enough to allow for the nearly unfettered introduction of new technology, being late isn’t all that risky.  That’s why the incoming President Trump and his potential to put up trade barriers is a key issue for policymakers.

The CNY continues to weaken.  This is consistent with the steady decline in foreign reserves.

This chart shows the CNY/USD (black line) and the level of reserves (gold line).  The former is in CNY per USD, meaning the lower the value the stronger the Chinese currency.  Since reserves are calculated in dollars, to the extent that China holds reserves in other currencies a stronger dollar will lead to falling reserves.  The key unknown in this graph is which variable is independent; is the CNY weakening due to falling reserves or are reserves declining because of currency weakness?  In reality, the relationship is “reflexive,” a concept discussed often by George Soros.  Simply put, the direction of causality changes over time.  At present, we believe that reserves are leaving China because citizens are, for a number of reasons, wanting to invest overseas.  This is putting downward pressure on the CNY.  We know the PBOC is propping up the CNY, likely fearing that it may encourage faster capital flight if the depreciation accelerates (thus, the reflexive nature of the problem).  We see the CNY’s weakness as inevitable; U.S. monetary policy by itself will probably lead to that outcome.  However, political uncertainty in China is likely playing a role in capital flight, creating a negative feedback loop.  The main concern is whether it could trigger a financial crisis if reserves continue to leave China.  That is one of the key risks for 2017.