Good morning and happy Monday!  U.S. equity futures are higher this morning as vaccine distribution begins.  The Electoral College votes today.  There are two big items today—Brexit and the vaccine, so we lead off with those two categories.  There was a major hack announced over the weekend.  The Fed meets this week.  We update economics and policy and close with a roundup of foreign news.  A note to readers—the Daily Comment will go on holiday hiatus starting December 23 and return on January 4.  And, watch for our 2021 Outlooks; we will publish both the 2021 Outlook and the 2021 Geopolitical Outlook later today.  Here are the details:

Brexit:  That “whoosh” you heard over the weekend was the passing of another deadline!  Last week, after PM Johnson and EC President von der Leyen met, Sunday was said to be the end of talks.  However, as we have seen throughout this whole process, the real deadline is that last possible day, which in this case, will be December 31, 2020.  The leadership indicated it would continue talking, even though the tone was decidedly pessimistic.  The GBP rallied on the news.  Here are the details of what we know so far:

COVID-19:  The number of reported cases is 72,336,167 with 1,314,159 fatalities.  In the U.S., there are 16,257,899 confirmed cases with 299,191 deaths.  For illustration purposes, the FT has created an interactive chart that allows one to compare cases across nations using similar scaling metrics.  The FT has also issued an economic tracker that looks across countries with high frequency data on various factors. 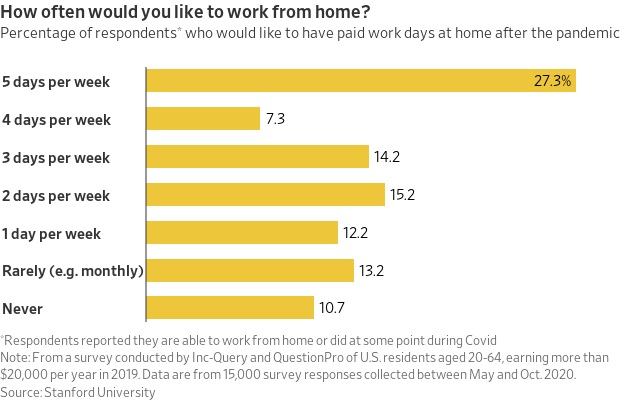 This chart shows nearly 50% of respondents to this survey would prefer to work more than three days per week from home.

The hack:  Over the weekend, several government departments, including Treasury and Commerce, admitted they had been hacked by what appears to be a foreign government, very likely Russia.  The hack came to light after the cybersecurity firm FireEye (FEYE, USD, 13.83) announced its systems had been penetrated through a software distribution management firm called SolarWinds (SWI, USD, 23.55).  The government has ordered all its departments to disconnect from the software.  According to reports, the hackers have been placing malware in U.S. computer systems since early spring, meaning they have had nine months to capture data.  It is still too early to tell what has been lost or what the hackers were after.  Apparently, it was a massive breach.

The Fed:  The FOMC meets this week and is trying to manage an upcoming problem.  It is clear that the economy is going to face a serious slump in Q4 and Q1, but there could be a notable rebound as the vaccine is distributed.  Thus, should it add stimulus now to help the economy in the short run and run the risk of inflation or dealing with the signaling challenge of tapering stimulus later in 2021?  The good news about the vaccine is that it probably avoids the worst-case scenarios.   Nonetheless, the chances of a bad outcome are not zero; fiscal stimulus could disappoint, and the current vaccine is a new technology that hasn’t been used beyond clinical trials.  Thus, we expect the FOMC to extend its QE program.

Economics and policy:  Fiscal stimulus talks continue and are tied to vaccine distribution.