[Posted: 9:30 AM EDT] It’s a risk-off Friday; global equity markets are slumping, economic data from China and Europe looked weak and PM May got rebuffed by EU leaders.  As noted, equities are lower, the dollar is up and Treasury yields are down.  Here are the details:

Global data: In China, retail sales hit a 15-year low as car sales[1] are on track to have their first annual sales decline since the 1990s.[2]

Since the 2008 crisis, China has maintained growth by increasing infrastructure spending and increasing debt.  Policymakers are suggesting that similar actions are coming but the nagging fear is that we have reached the level where additional debt isn’t leading to stronger growth.

Meanwhile, in Europe, the flash PMI data was soft as the Eurozone manufacturing index dipped to 51.4, a 31-month low.  Services also came in at 51.4, well below the forecast.  Much of the weakness came from France, where protests led the composite index (combination of manufacturing and services) to fall to 49.3, below the expansion line of 50.

In some respects, today’s data is simply part of a trend that has been in place for over a year. 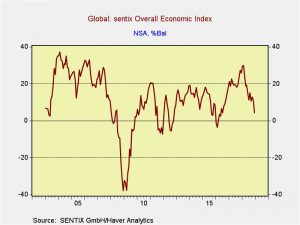 Sentix is a German economic research group that conducts surveys of economic sentiment.  As the chart above shows, sentiment has been coming under pressure since peaking in January.  Governments are aware of this weakness and have been increasing fiscal spending.  Although we don’t expect a recession in the U.S. next year, global growth remains soft and the disparity between the U.S. and the rest of the world has supported a stronger dollar.

Brexit: PM May went to Brussels looking for help.  As expected, she received nothing.[3]  The most common complaint from EU ministers is that May didn’t know what she wanted.  This sentiment is probably not completely accurate—she wants the EU to give concessions to appease MPs that the EU simply isn’t prepared to offer.  The lack of progress sent the GBP lower this morning, although it should be noted that the dollar is higher across the board.  Thus, this issue may not be all that important to the movement of the currency.

To reiterate, the majority of MPs do not want a hard Brexit, which would be a sudden ending of relations on March 31 that would sever EU trade relations with the U.K.  At the same time, the negotiated deal May has created will not pass Parliament.  Absent a referendum, it isn’t clear what the path forward is, although we do note that a hard Brexit is on the calendar if nothing else happens.  It is possible May simply can’t make a deal to avoid a hard Brexit but it isn’t obvious if anyone else can, either.  Labour’s Corbyn would like elections but he didn’t have the courage to call for a full no-confidence vote, which would have likely brought down the government.  Corbyn’s reluctance to trigger a confidence measure suggests he doesn’t have any better ideas on how to move forward.

Our working assumption is that a hard Brexit is unlikely because no party really wants that outcome.  However, each day that passes without progress increases the odds of that result because it is the only outcome determined by the calendar alone.  If nothing happens by the end of March, the U.K. leaves on WTO rules.  We still expect another referendum but that could require May to step down since she continues to argue that it’s her deal or nothing, which isn’t quite true.  However, the strong Brexiteer fantasy that a better deal can be negotiated simply isn’t going to happen.  So, we are looking at either (a) a new referendum that keeps the U.K. in the EU, (b) May’s deal, or (c) a hard Brexit.  The middle choice looks unlikely so it is either a new vote or hard out.  And, by the way, a referendum may simply lead to the same outcome as the first.  In the end, we will probably need to approach the deadline in order to focus all parties into actually doing something.  However, waiting increases the chances of a “sleepwalk” into disaster.

Senate rebuffs Saudi Arabia: The Senate[4] voted to withdraw American support for the Saudi-led war in Yemen.  The vote is mostly symbolic since it won’t pass in the House.  But, it is a rejection of the administration’s policy and a rare legislative defeat for the White House.  In our view, the U.S. can’t sever relations with Saudi Arabia without risking a wider breakdown in the Middle East.  At the same time, guiding the kingdom to find a new crown prince should be supported.

Stress monitor: With concerns rising in the financial system, it should be noted that the stress indices are holding on rather well. 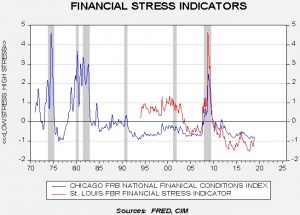 We mostly rely on the Chicago FRB number because it has a much longer history, but we monitor the St. Louis report as well.  The latter has ticked higher recently but we usually don’t worry about stress until we see readings above zero.

Slowdown in Q4: The Atlanta FRB GDPNow reading is down to 2.4% for Q4. 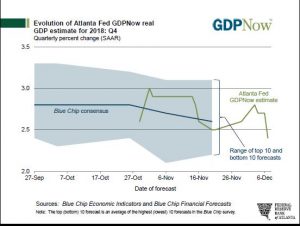 Here are the estimated contributions to growth. 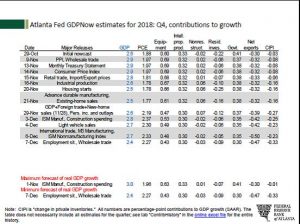