[Posted: 9:30 AM EST] Markets are mostly quiet this morning, although there has been a lot of news over the past 24 hours.  Here is what we are watching:

Central banks: The Fed began the discussion (which we discuss at length below) but the BOE, ECB, PBOC and SNB were all active today.  The PBOC raised Chinese borrowing costs in apparent response to the FOMC’s rate increase, although the pace of the changes were less.  The seven-day and 28-day repo rates were lifted 5 bps, and the one-year rate was raised by the same amount to 3.25%.  The BOE, as expected, left policy unchanged but did indicate it is prepared to raise future rates.  The ECB also left policy unchanged; Draghi’s press conference is occurring at the time of this writing and the general tone is dovish.  Perhaps the biggest surprise came from the SNB, which indicated that the Swiss central bank is prepared to allow inflation to exceed its official target.  The CHF dipped on the report.  Overall, it appears the European central banks are more than willing to allow the Fed to raise rates without similar responses, suggesting they are either comfortable with the exchange rate levels or are actively seeking depreciation.

PM May slammed again: U.K. PM May suffered a defeat in Parliament as lawmakers voted 309 to 305 to guarantee that Parliament will have a “meaningful” vote on Brexit.  May wanted the freedom to negotiate a deal without coming back to Parliament for approval.  This outcome will weaken her ability to negotiate a final agreement and raises the chances of a “hard Brexit,” or a potentially violent exit without a trade deal or an agreement on the status of regulation.  Interestingly enough, the MPs who voted for this outcome were the Remainers, who hope to stall the final outcome so long that the U.K. essentially never leaves.  The division on stay or remain is actually finely balanced and thus a final agreement that will make everyone happy is almost impossible.  Although May’s position is clearly weakened, there is no evidence the MPs are planning a no-confidence vote because they fear an incoming Corbyn-led Labour government.

Tax deal: It appears a final version of the tax bill has been negotiated.  Congress expects a score by tomorrow (it needs to not cause a deficit in excess of $1.5 trillion over a decade) and have it to the president’s desk by December 20.  This isn’t a done deal; Collins (R-ME) and Rubio (R-FL) both oppose the cut in the highest marginal rate to 37% but we do think that, in the end, they will cave.  Still, there is no margin for error and losing two senators will doom the legislation.  A side-note: there was a provision to end investors’ abilities to select lots for investment sales and would have required “first in, first out,” which would have been a hidden increase in the capital gains rate.  That provision has apparently been dropped.

The Fed: The FOMC did raise rates as expected.  The market’s take was modestly dovish.  The committee left its path of tightening unchanged; there were worries about the potential for a projection of four rate hikes in 2018, but that didn’t occur. 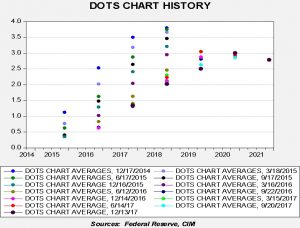 This is our dots chart history.  The most recent dot is dark blue.  The 2018 and 2019 dots are essentially equal to the September meeting.  It is a bit higher in 2020 but that won’t have a significant impact on the outlook toward policy.  The FOMC is clearly signaling that it would like a terminal rate of 3.00% for fed funds.

The vote was 7-2, with Minneapolis FRB President Kashkari and Chicago FRB President Evans voting against the rate hike.  Usually, that would have been profoundly dovish.  As a general rule, three dissents is the maximum and two dissents suggests the room to raise rates is limited.  However, both Evans and Kashkari will rotate off the voting slate and be replaced with more hawkish members in 2018.  Thus, their dissents were not all that dovish.

In terms of expectations, the unemployment rate is forecast to fall to 3.9%, which is down from September’s estimate of 4.1%.  Core PCE expectations were left unchanged.  For next year, GDP growth was bumped up to 2.5% from 2.1%.  Stronger growth and lower unemployment without inflation suggests the members believe the slope of the Phillips Curve must be nearly flat.  We tend to agree.

Overall, it was a modestly dovish report.  The reactions of the dollar, gold and Treasuries suggest markets were positioned for a more hawkish policy projection.  Yesterday’s inflation data confirms that, for whatever reason, price levels remain mostly stable.  We still expect a more hawkish FOMC next year based on the regional president voters and new governors.  But, the current path of policy tightening remains slow which is supportive of equities, Treasuries and gold, but bearish for the dollar.  This is the Fed that Jerome Powell will inherit.

This chart shows current crude oil inventories, both over the long term and the last decade.  We have added the estimated level of lease stocks to maintain the consistency of the data.  As the chart shows, inventories remain historically high but have declined significantly this year.  We also note the SPR rose by 0.2 mb, meaning the net draw was 4.9 mb.

As the seasonal chart below shows, inventories fell this week.  We are now well within the year-end seasonal draw.  As the new year starts, stockpiles will begin their largest seasonal build from early January into early April.

Oil prices fell yesterday due to rising gasoline stockpiles.  Although the rise in stocks was large, up 5.7 mb, this is the period during the year when gasoline stocks rise. 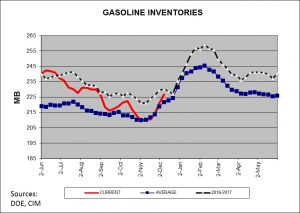 As the chart shows, gasoline inventories will likely rise into early February.  They are rising faster than normal and refining activity will likely decline if this pace continues, reducing oil demand.

Based on inventories alone, oil prices are undervalued with the fair value price of $60.16.  Meanwhile, the EUR/WTI model generates a fair value of $63.83.  Together (which is a more sound methodology), fair value is $62.30, meaning that current prices are below fair value.  Overall, oil prices are within normal ranges of current fundamentals but we are neutral to bullish toward crude oil at this time.

The IEA’s quarterly update suggests that non-OPEC supply will rise 1.6 mbpd, with the non-OPEC Western Hemisphere supplying 1.3 mbpd of the increase.  The group is expecting demand to rise 1.3 mbpd, so the sharp drop in stockpiles seen in 2017 does not look likely to repeat unless OPEC cedes market share.  We are somewhat less optimistic on rising non-OPEC output compared to the IEA, but the report is bearish and accounts for today’s weakness in oil despite the large draw of crude oil reported by the DOE.