Happy Friday the 13th!  For the past four years, financial markets have been dealing with elevated levels of uncertainty.  The issue of Brexit dominated the EU, policy shifts by the Trump administration and assertive policies from China all contributed to uncertainty.  This uncertainty didn’t prevent risk assets from appreciating, but we can safely argue that these issues (and others) likely prevented even higher risk asset prices. 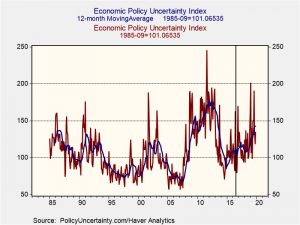 This chart shows the U.S. economic policy uncertainty index, with a 12-month average.  Note that uncertainty has been persistently rising since Brexit in mid-2016.  Yesterday, some of the clouds parted, while new ones, which we can see on the horizon, are not yet undermining confidence.  Let’s take a look at what’s changed over the past 24 hours:

The U.K. election:  It was a smashing victory for the Tories.  Although we are still waiting for one district, the nearly final results show the Conservatives with 364 seats out of 650 seats.  With this level of support, PM Johnson should be able to move just about anything he wants through Parliament.  The political shift was astounding and generational.

There were two winners in this election, the Tories and the SNP.  Labour was crushed, as were the Liberal-Democrats.  The DUP in Northern Ireland also suffered historic losses, meaning Johnson will no longer need to worry about placating the Unionists in implementing Brexit.  Here are our initial thoughts on the ramifications of this election:

It would appear that a reading of 40%+ makes one vulnerable to leaving.  On that score, Poland, Slovenia, Croatia and Italy are all potential nations for exit.  Of those listed, Italy would be the most problematic because an Italexit would probably bring down the Eurozone, too.  This may push EU negotiators to hew a hard line against the U.K. in trade talks, but with the caveat that a break in trade with the U.K. will harm the EU as well.

We will continue to monitor developments on this issue but, in the short run, clarity on Brexit is bullish for risk assets.

China trade: Yesterday, reports emerged that the U.S. and China had agreed to a partial trade agreement.  The U.S. would roll back some tariffs and China would agree to buy grain.  However, this morning, China, which had not actually agreed to the deal, seemed to be pulling away.  China is expected to hold a press conference about an hour after the time of this writing, so we will see if they are on board.  Here are two things we are watching.  First, Robert Lighthizer is key; his career has been spent putting together trade deals that force compliance on foreign nations.  China loathes to make such agreements.  If he leaves after this deal, it suggests the Trump administration has backed down.  If he stays, whatever is arranged will likely be hard for China to accept.  Second, if China decides not to accept the U.S. deal, we could see a repeat of what we saw in May—a rapid move to retaliate by the U.S.

Saudi Arabia: In the face of growing uncertainty surrounding U.S. security support, the kingdom is making quiet entries to Iran.  Although the Saudis loath Iran’s government, it does not want a hot war with Tehran and so coming to terms is consistent with Riyad’s behavior.

Shutdown averted: The U.S. has a deal to prevent a government shutdown on December 20th.   Although we did expect an agreement, this news does remove a potential risk to the financial markets.

United States: The Fed yesterday said it will pump almost $500 billion into the financial system over the new year in an attempt to avoid a repeat of September’s big jump in short-term interest rates.  That would nearly double the scale of its recent interventions into the repo market.  The Fed clearly doesn’t want to call this a return to quantitative easing but flooding the market with liquidity like this is likely to have the same positive effect on the markets.  If it looks like a duck and walks like a duck and quacks like a duck . . . well, it probably is a duck.

China-Hong Kong: Just as Chinese authorities have feared, the prolonged political protests in Hong Kong may finally be inspiring protests in China itself.  Reports point to growing on-line criticism of the government over an ex-employee of telecom giant Huawei (002502.SZ, 3.50) who was detained for 251 days after a labor dispute.  Although the on-line comments are quickly censored, posters are arguing that the detention highlights the need for reasonable bail conditions and shows that the Hong Kong protestors were justified in their protests against a proposed law allowing extradition to China.

India: Riots have erupted across northeastern India in protest against a new law seen as basing citizenship on religious affiliation.  The law, which would give Hindus and other non-Muslim migrants from neighboring Muslim-majority countries a fast track to Indian citizenship, comes just months after Prime Minister Modi revoked the special autonomous status of India’s only Muslim-majority state (see our WGR of September 9).  The protests may not be enough to endanger Modi’s government, but they have been bad enough to force the cancellation of a weekend summit between Modi and Japanese Prime Minister Abe.

World Trade Organization: Trade Commissioner Phil Hogan said the EU will beef up its laws so it can impose punitive tariffs on other countries’ exports, in spite of the WTO’s dispute settlement system being frozen.  In an effort to put the WTO out of business, the United States has blocked the appointment of new judges to the panel, creating a risk that countries previously charged with illegal trade barriers would file ghost appeals that would indefinitely prevent the EU from imposing punitive tariffs against them.

Russia: The central bank today reduced its benchmark short-term interest rate to 6.25% from 6.50% previously, for its fifth rate cut of the year.  The benchmark rate is now at its lowest since right before Russia’s 2014 financial crisis, when Governor Nabiullina hiked it to 17% and let the ruble float free.  Inflation has now fallen below the central bank’s target of 4.0%, allowing Nabiullina to focus on supporting economic growth.  The move will likely be positive for Russian assets.