FOMC today: At 2:00, we will get a decision with certainty regarding a 25 bps rate hike.  We will also get new dots and forecasts, along with Chair Yellen’s last press conference at 2:30.  Usually, press conferences are important.  This one really won’t be because she will exit by February.  Thus, anything she says could be moot in less than two months.  The debate now is whether we will get three or four hikes next year.  At present, the financial markets only have two hikes discounted.

With the release of the CPI data we can upgrade the Mankiw models.  The Mankiw Rule models attempt to determine the neutral rate for fed funds, which is a rate that is neither accommodative nor stimulative.  Mankiw’s model is a variation of the Taylor Rule.  The latter measures the neutral rate using core CPI and the difference between GDP and potential GDP, which is an estimate of slack in the economy.  Potential GDP cannot be directly observed, only estimated.  To overcome this problem with potential GDP, Mankiw used the unemployment rate as a proxy for economic slack.  We have created four versions of the rule, one that follows the original construction using the unemployment rate as a measure of slack, a second that uses the employment/population ratio, a third using involuntary part-time workers as a percentage of the total labor force and a fourth using yearly wage growth for non-supervisory workers. 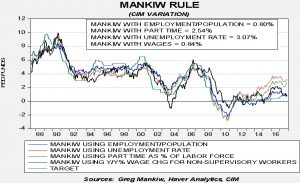 Using the unemployment rate, the neutral rate is now 3.07%.  Using the employment/population ratio, the neutral rate is 0.80%.  Using involuntary part-time employment, the neutral rate is 2.54%.  Using wage growth for non-supervisory workers, the neutral rate is 0.84%.  The fact that core CPI remains steady maintains the split within the variations.  If the proper measure of slack is unemployment or involuntary part-time employment, then the FOMC lifting rates is clearly proper.  On the other hand, if either the employment/population ratio or non-supervisory wage growth is the better measure, then further rate hikes are dangerous.  However, in the latter two variations—employment/population ratio or non-supervisory wage growth—there is still some room to raise rates before one achieves policy tightness.  Both models have a standard error between 100 to 125 bps.  So, roughly, taking the policy rate target to 1.75% to 2.00% would raise the risk of recession.  This is probably why the financial markets don’t expect fed funds to go above 2.00%.  We will recap the meeting in tomorrow’s report.

Alabama: In an upset, Doug Jones won the special election for the remainder of Jeff Sessions’s term, which ends in 2020.  Here are our takeaways:

North Korea: SOS Tillerson told Pyongyang that he would be willing to talk “without preconditions.”  At the same time, the White House is reportedly asking China to ramp up sanctions and pressing for an oil embargo.  Given Tillerson’s tenuous position in the administration, his offer for talks may not have legs but it bears watching if North Korea takes him up on the offer.