Markets are quiet today but there is a lot going on.  The U.K. is voting today; so is Algeria.  Israel is facing yet another election.  Legarde holds her first ECB meeting.  We recap the Fed meeting.  The trade situation is updated.  We also discuss the weekly energy data, including the IEA report and more on the Saudis.  So, let’s get to it!

Elections:  The polls in the U.K. close at 5:00 pm EST and exit polling should give us an idea of the outcome shortly thereafter.  Expectations are for a Tory win; for the most part, we are trying to divine how many seats the Conservatives will control.  However, globally, polling has been increasingly unreliable.[1]   The structure of British elections tends to make national polling less useful.  The U.K. uses a “first past the post” system; in any district, the winner, even if it’s a plurality, gets the seat.  So, a large national lead doesn’t necessarily mean a majority of seats.  The other problem in this election is that there remains a high number of either undecided voters or voters who lack strong convictions.  Thus, unexpected swings can occur, such as the Brexit vote.  Recent polling has suggested a narrowing of the Tory lead, which may reflect undecideds coming to a decision.  That trend does raise the risk of a surprise.  An expected Tory win would likely give the GBP a modest lift to around $1.35.  An outright Labour win would send the currency plunging to $1.20 or below.  Paradoxically, a hung Parliament, especially a Lib-Dem/Labour/SNP government, would likely send the GBP soaring (GBP at $1.45 at a minimum) as this array would probably either reject Article 50 and remain in the EU, or bring another referendum.  We think odds favor a Tory win, but there remains a chance of a different outcome.

Algerians, on the other hand, are mostly boycotting the polls rather than participating in electing one of five candidates that the military selected.  Tensions will likely continue to smolder.

Again, political parties in Israel have failed to form a government.  The Knesset has dissolved and new elections will be held next year.

The ECB:  In Legarde’s first meeting, interest rates and bond buying were left unchanged as expected, although the statement suggested that further easing is possible.  We would call the statement modestly dovish.  In the press conference, Legarde quickly took control, telling the assembled journalists that they shouldn’t compare her to earlier presidents, that she will have her own style and methods.  She also announced a strategic review, the first for the ECB since 2003, but offered few details.  During the Q&A, Legarde handled questions smoothly, as expected.  She is a polished political operator.  What she does with these skills will be the most interesting part of her term.

In related news, she inherits a really weak Eurozone economy.  The industrial production data from today confirms this weakness.  October industrial production fell by a seasonally-adjusted 0.5%, as increased output in France wasn’t enough to offset the continued downturn in German and Italian manufacturing.  The reading for October met expectations, but September’s output was revised downward to show a 0.1% decline.  Therefore, production in the Eurozone has now fallen in seven of the last ten months.  Output in October was down 2.2% year-over-year. 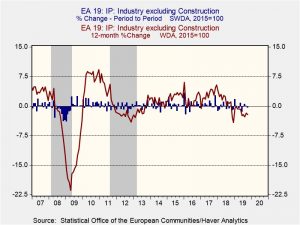 The FOMC:  As expected, the FOMC left rates unchanged, and there were no dissents.  Two key takeaways from the FOMC meeting’s results.  First, there appears to be general unity that rates will remain steady for the next year.

The yellow dots[2] show yesterday’s meeting compared to September.  Note that for 2020, we have moved from a rather wide dispersion in September to all but four committee members calling for steady policy yesterday.  That being said, no member is calling for further rate cuts, which we think is a bit odd, given that the consensus growth and inflation numbers were calling for tepid growth.  All of these datapoints suggest that a consensus has developed on policy and getting either hikes, or cuts of the policy rate will take a measurable change in economic or market conditions.

Second, the FOMC generally postponed any discussions of NAIRU; unemployment is expected to slowly decline through 2022.   Powell was questioned about the Phillips Curve and the labor market.  Our take is the Phillips Curve remains the dominant model for policy and the committee thinks that there is little they can do to lift inflation aw well as little danger to inflation from high levels of employment.

Third, Powell suggested that the issues in the repo market were technical in nature and would not have a macroeconomic impact.  We disagree with that stance but since the fix, QE4, is readily available, a potential crisis from this situation is unlikely.  However, that doesn’t mean we won’t get a “scare.”

Trade:  President Trump is meeting with his trade advisors today; expectations are for the Monday tariffs with China to be delayed, but that outcome isn’t certain.  Chinese negotiators are said to be in close contact with Washington.  The planned tariffs on China, would they come into effect, would have a much larger impact on consumers compared to the earlier ones.  The planned taxes would affect an array of consumer goods that have few other suppliers, meaning that they would, more likely, directly raise prices to households.  There is high chance that if the tariffs are implemented, inflation would rise, the CNY would depreciate and the Fed may be required to keep rates steady, or consider a hike in the policy rate.  Simply put, it would have an adverse impact on the U.S. economy.  That’s why we expect a postponement.

In related news, a senior Chinese diplomat accused the U.S. of fomenting “color revolutions” in China.  Beijing is launching a public relations campaign to combat “foreign interference” in Hong Kong, suggesting that positions are hardening.  Overall, even if we get a Phase One trade deal, decoupling with China is the trend in place.

France:  President Macron finally unveiled the details of his planned pension reform, which touched off the country’s ongoing nationwide strike.  The plan calls for a more conservative approach to calculating monthly benefits, as well as carrots and sticks to encourage people to retire later.  Union leaders decried the details and called for a continuance of the strike.  If the walkout continues long enough, it could have a noticeable negative impact on the French economy and French assets.

Russia-Germany:  The Russian government has ordered two German diplomats to leave the country, as it retaliates for Germany’s expulsion of two Russian officials last week.  Germany’s action was taken after investigators began to suspect the Russian government assassinated a former Chechen rebel in a Berlin park last summer.  A continued deterioration in relations would threaten to further isolate Russia, whose economy is already burdened by Western sanctions.

United States-North Korea:  Amid signs that North Korea is ramping up its provocative military moves again, U.S. diplomats have reportedly begun meeting with UN Security Council members to plan out a response.  If the escalation in tensions continues, we think investors could unexpectedly face a risky North Korean provocation reminiscent of 2016 and 2017, which would likely be negative for risk assets.

In the details, U.S. crude oil production fell 0.1 mbpd to 12.8 mbpd.  Exports rose 0.3 mbpd while imports increased 0.9 mbpd.  The rise in stockpiles was greater than expected mostly due to rising imports.

This chart shows the annual seasonal pattern for crude oil inventories.  The early winter draw season is underway and will continue into early 2020.

In energy news, Saudi Aramco (2222, Tadawul, SAR, 36.80) rose again today, hitting the crown prince’s goal of a market capitalization of $2.0 trillion.  The prince is facing what many firms learn in going public; they don’t get the full value of their shares at the IPO.  The IEA warns that even OPEC+Russia cuts will be inadequate to prevent rising stockpiles in 2020.  Nearly a year after he claimed to be the new president of Venezuela, Juan Guaido is turning out to be something of a bust.  It is unclear how long Venezuela can continue to limp forward; this pictorial of automobile abandonment in Venezuela is a testament to the tragedy of what this nation has suffered under misguided socialist policies.

[1] At the same time, our other “reliable source,” prediction markets, are giving an 85% chance that Johnson is the next PM.

[2] The WSJ notes that the FOMC is becoming jaded on the usefulness of the dot information.  The dots have suggested much more tightening than has actually occurred.  The dots tell us more about the biases (or, more accurately, the hopes) within the FOMC but little about the path of future policy.