[Posted: 9:30 AM EDT] Risk markets are higher again this morning after fading the strong opening yesterday.  A bail decision and, interestingly enough, a no-confidence vote appear to be the catalysts.  There is a lot of news this morning.  Here is what we are watching:

Meng gets bail: In the end, the Canadians granted Meng Wanzhou bail.[1]  The terms are stringent; a CAD 10.0 mm bail, a private security detail and a location bracelet are all part of the agreement.  However, supporting market sentiment was President Trump’s suggestion that he could “intervene” in Meng’s case if it would support trade negotiations.[2]  The optics of the president’s offer are potentially problematic.  If he didn’t know about the arrest (and there is some evidence to suggest he might not have known it was about to occur) then he is probably in the clear.  But, if he knew about the arrangement, then her arrest makes her into a bargaining chip.  We note that yesterday China arrested Canada’s former ambassador to China, setting up a potential exchange to keep Meng from being extradited to the U.S.[3]  We also note that the State Department is considering issuing travel warnings for business executives traveling to China, a clear expression of concern.[4]

Although President Trump’s offer is likely helping the equity markets this morning, the path of U.S./China policy remains problematic.  To some extent, trade policy is probably less important than technology transfer policy and tech issues surrounding this policy remain tense.  For example, the U.S. is planning to condemn China over its hacking and economic espionage.[5]  Reports suggest recent hacking activity originated in China.[6]  Meanwhile, on trade, the U.S. hopes that China will begin buying U.S. soybeans soon.  In fact, officials are confident enough that they are delaying aid payments.[7]

However, we also expect a truce to emerge on trade and perhaps even technology as we head into 2019.  Next year will be the last full year before the 2020 elections and, traditionally, presidents try to lift the economy and markets going into elections.  Although the long-term path of difficult relations with China remains in place (with all the potential for surprises and accidents), we still believe that odds favor a temporary truce.

May to face no-confidence vote: Opponents of PM May were finally able to get 48 letters from the Tories, although there is speculation that she herself may have convinced some of her supporters to send letters, triggering the vote on purpose (how Machiavellian!).  It appears that she has enough votes among Tory MPs to remain as PM.  Thus, winning the vote will solidify her position and this expectation explains the rally that has ensued from news of the vote.  The results of the vote should emerge today in early afternoon.  It should be noted that if May wins this vote, Parliamentary rules mean she cannot be challenged for 12 months.[8]

That Oval Office meeting: Yesterday, Americans were shown a bit of political theater as Nancy Pelosi, Charles Schumer and President Trump engaged in an open and spirited debate before the cameras over the border wall and government shutdown threats.[9]  VP Pence remained quiet in observation.[10]  We mention the event because equity markets turned lower during the spectacle.  The reason for the open debate can be seen in recent polling.[11]  Although the majority of Americans oppose closing the government over border wall funding, Republicans support the action 65% to 29%.  Democrats oppose closing the government over border wall funding 71% to 21%.  Essentially, all parties involved were targeting their political bases.

We would not expect a similar reaction to either a shutdown or another tussle for the media.  Financial markets have been through a series of shutdowns; each event has less of an impact.  Do we expect a shutdown?  No.  The GOP Senate leadership has no interest in a shutdown and we expect McConnell to prevent one from occurring.

Italian budget news: There were reports that the Italian government was giving in to EU demands, offering an adjusted budget with a mere 2% deficit/GDP.[12]  Italian bonds rallied strongly on the news.  However, the reports have not been confirmed.  Meanwhile, League leader Salvini was forced to deny rumors he was considering snap elections.[13]  We suspect these rumors are due to continued tensions between the coalition partners; Salvini would probably like to rid himself of the Five-Star Movement.

More on tech: Yesterday, Google’s (GOOGL, 1061.65) CEO was grilled on Capitol Hill.  As we have been commenting for some time, the tech sector has been facing increasing political and regulatory scrutiny.  At the same time, tech companies are mostly U.S. entities and American leaders have an interest in boosting their power relative to foreign firms.  We note a report today that shows how the USMCA is actually quite favorable to American tech firms, especially in data gathering.[14]  Although we don’t doubt the sincerity of political figures attacking tech firms, it should also be remembered that the U.S. benefits from a strong tech sector (unlike the Europeans, who have nothing close to the size and scope of American tech firms).  As a result, there will tend to be a desire to support such firms.

An attack on float: One of the secrets of finance is the income generated from “float,” which is money that is between payments.  Whoever “owns” that money in financial limbo collects interest.  In some cases, float is a key component of a firm’s earnings.  The Fed is considering measures to dramatically accelerate payments.  Currently, payments are processed in batches three times a day and only during business hours.  If you buy a good at midnight online, the bank may be able to earn interest on the payment until the first clearing session.  The Fed wants to move the banking system to a 24/7, 365-day payment clearing system.[15]  Losing float would harm the banks that are primarily making float on lower income Americans who live close to zero balances in their checking accounts.  The slow pace of financial clearing often means low income households inadvertently bounce checks because deposits don’t get credited as soon as payments.  Large banks are working on a similar system and oppose a Fed competitor.  We will be watching this battle closely to see if it attracts populist support.

The latest iteration of our Mankiw Rule models: The Mankiw Rule models attempt to determine the neutral rate for fed funds, which is a rate that is neither accommodative nor stimulative.  Mankiw’s model is a variation of the Taylor Rule.  The latter measures the neutral rate using core CPI and the difference between GDP and potential GDP, which is an estimate of slack in the economy.  Potential GDP cannot be directly observed, only estimated.  To overcome this problem with potential GDP, Mankiw used the unemployment rate as a proxy for economic slack.  We have created four versions of the rule, one that follows the original construction by using the unemployment rate as a measure of slack, a second using the employment/population ratio, a third using involuntary part-time workers as a percentage of the total labor force and a fourth using yearly wage growth for non-supervisory workers. 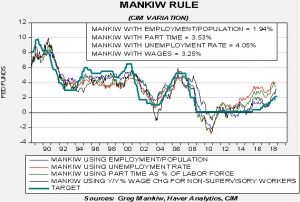 Of all the variations, the wage growth one is the most concerning.  Although comments from Fed officials have turned dovish and financial market expectations have also turned in a similar direction, the rise in wages will support the hawks’ position on raising rates further.