[Posted: 9:30 AM EST] The two major news items this morning are OPEC and China.  First, OPEC managed to procure pledged cuts of 558 kbpd from non-OPEC producers.  This is the first time since 2001 that the cartel has managed to get production cut pledges from producers outside of OPEC.  It is reasonable to assume that few of these reductions will materialize.  However, the real story is that the Saudis hinted they may cut more than their current promise, suggesting the kingdom is committed to driving oil prices higher.  In fact, Saudi Oil Minister Khalid Al-Falih signaled that his country would be willing to cut production below 10 mbpd, which is below the current official production target.  This is sort of a “whatever is necessary” move to drive prices toward $60 per barrel.  Although there are always doubts about an OPEC deal, there have been successful agreements in the past and the common element is a strong commitment from Saudi Arabia.  Thus, the agreement does look substantial.

This doesn’t mean that there won’t be bearish issues for oil that may develop.  First, we will likely see a rebound in U.S. shale production.  The industry has been working hard to reduce production costs and production will likely rise with prices well above $50.  Second, rising oil prices will trigger changes in both inflation expectations and actual inflation, which will tend to push the Fed to tighten credit faster.  Since the mid-1990s, oil prices have tended to lead core CPI by about 18 months.  Oil prices in January 2016 averaged $31.67 per barrel.  If oil prices hold near current levels into January, the yearly change will exceed 64%.  As the Fed raises rates it will slow economic growth and boost the dollar.  Since the mid-1990s, the dollar and oil have been correlated at -62% (y/y% change).  Dollar strength will be a headwind for oil prices.  Third, despite the euphoria, U.S. oil inventories remain elevated.  One way to address this overhang would be a rise in oil exports, which we would anticipate.  Although that will help balance the oil market, it requires a loss of market share for OPEC.

In the short run, we expect oil prices to remain supported into next year.  The Saudis appear committed to a deal and seem to be targeting $60 per barrel.  We think we will get there, but staying there will be difficult.

On China, President-elect Trump suggested that he is not necessarily bound by the “one-China” policy.  This comment has led to handwringing in Beijing and inside the Beltway in Washington.  We suspect Trump is signaling to China that the relationship between the two nations is headed toward a restructuring.  Just because a relationship has been in place for a long time doesn’t mean it has become sacred.  What Trump has to consider is that the PRC views Taiwan as a breakaway province; any move toward independence is thus a secession and grounds for civil war.  Given that we don’t have a foreign policy apparatus around the incoming president yet, it is still too early to get too exercised over this matter.  But, it appears to us that Trump is making it clear that the relationship between the two states is going to be renegotiated and China should prepare itself for a new structure.  And, fitting with Trump’s position favoring complete flexibility, he is signaling that he won’t necessarily be bound by previous constructs.

This news isn’t being taken well in China as seen by the weak performance of Chinese equities.  Although reports that Chinese insurance firms will be restricted from investing in equities are partly to blame, we suspect uncertainty with regard to foreign policy and rising rates are weighing on sentiment as well.  This uncertainty coupled with pressure from rising U.S. interest rates and capital flight are raising concerns among Chinese policymakers.  We note that today’s NYT is carrying a report that peer-to-peer lending technology is leading Chinese middle class investors to projects in the U.S.[1]  Although we suspect that, in the end, China and the U.S. will continue the one-China policy, Trump does appear to be using it as a bargaining chip.

In other news, Italian banks are trying to raise capital, although the likelihood of success looks low.  The Italian foreign minister, Paolo Gentiloni, has been given the mandate from the president to form a new government.  It appears he will be able to use Renzi’s administration to continue governing for now, but we would not be surprised to see elections held sometime next year.

The FOMC meeting concludes on Wednesday with a press conference—the upcoming FOMC meeting is important.  The baseline expectation is that the Fed will raise rates by 25 bps and probably continue to signal a steady path toward higher rates.  Given recent growth numbers, we would not expect any dissents from the doves.  We will be watching for any indication that the path for policy next year will remain about as the market has discounted (roughly two hikes of 25 bps each next year), or something quicker.  We suspect the statement and the press conference will continue to signal a slow glide toward higher rates, but we would not be shocked to see or hear promises to move faster if conditions warrant.

Finally, since the early 1990s, consumer sentiment and investor sentiment have been closely linked. 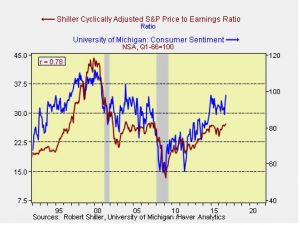 This chart shows the University of Michigan consumer confidence data with the Shiller P/E.  Since the early 1990s, the two have been correlated at +78%.  The recent rise in confidence is supportive for higher equity values.