[Posted: 9:30 AM EST] Looking for something to listen to while shopping?  Episode #4 of the Confluence of Ideas Podcast is now available.  It’s all about the Equality/Efficiency Cycle.  Enjoy!\

Happy Fed Day!  The FOMC meets today; there are no expectations of a rate change, but details will be watched.  The December 15th China tariffs remain unsettled.  U.K. elections loom and polling may have shifted.  Saudi Aramco (Tadawul 2222, SAR 35.20) began trading today.  Energy is on our radar.  Here are the items we are watching today:

The FOMC:  It’s a foregone conclusion that the Fed will keep policy rates steady.  However, that doesn’t mean there aren’t some issues to watch.  Here is what we are focused on:

If we were able to ask questions, we would hammer on points #1 and #3.  We will be watching to see what the journalists ask.

Trade:  USMCA looks poised to become law.  Even the labor unions are on board.  Meanwhile, there seems to be a general consensus that the December 15th China tariffs will be delayed.  However, Peter Navarro, the president’s trade consultant, told the media that a decision had not been made.  We have worked for bosses who seemed to make decisions based on the last person they talked to.  President Trump is the ultimate “decider” and it isn’t clear if he has made a decision yet.  It would not shock us if the president decides to apply the tariffs; it also would not be a surprise if he delayed their implementation.  Our expectation?  He delays the implementation but only by a month, keeping pressure on China to boost agriculture buying.

Brexit:  A poll by YouGov showed a dramatic narrowing of the Tories lead, causing a selloff in the GBP overnight.

The GBP gapped lower on the report, but has regained some of its earlier losses.  The overall poll tracker still shows that the majority of polls have the Tories with a 10 point lead.  We suspect that the reason polls are shifting is that none of the candidates have much depth of support.   Part of the reason for this development is similar to what we are seeing in the U.S.  Political coalitions are shifting.  In the U.K., traditional Labour strongholds are crumbling and even in Scotland, the SNP may be struggling.  At the same time, the center-right establishment, which would traditionally be solid for the Tories, opposes Brexit.  We suspect the Tories will win outright because the opposition is hopelessly divided.  However, surprises are clearly possible.

North Korea:  Financial markets are ignoring this issue but Pyongyang is clearly getting restive.   Additionally, President Trump faces a threat from his right flank; former NSC Director Bolton leveled a broadside against protecting North Korea at the U.N.  With all the other news circulating, Kim will need to do more to get attention.  We would not be shocked to see an ICBM test launch around Christmas.

Energy:  Chevron (CVX, 117.89) announced a write-down of assets to the tune of $10.0 bn, conceding the supply overhang developing in oil and natural gas.  U.S. natural gas prices have languished this decade as the associated gas production from shale oil has glutted the market.  Although it’s not a completely fair comparison, we note that U.S. WTI and Henry Hub natural gas prices tracked each other closely into early 2006; if we model that relationship and project it to today, the fair value for WTI is around $22 per barrel. 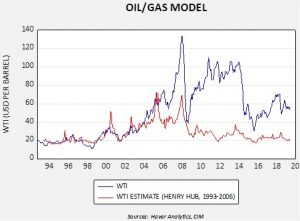 Again, this methodology has some flaws; natural gas is a less global market than oil and, more importantly, oil has a cartel. The fact that the two prices tracked each other from 1993-2006 may have been coincidental.  However, what this model might tell us is what would happen if the Saudis decide to recapture market share.  This fear might be one of the factors behind the underperformance of energy equities.  At the same time, the KSA has an incentive to keep prices up until it fully completes its IPO process.  So, for now, oil prices probably are not in immediate danger.  It’s not just the Saudis that can increase energy supply; so can cows!

US Soybean Production: Brazil is on pace to become the largest producer of soybeans in the world for the second year in a row. The country’s dominance of the market can largely be attributed to the ongoing trade war between the U.S. and China. The 25 percent tariff that China placed on soybeans has forced many of the country’s importers to look to Brazil to fill the void. As the trade war persists, it raises the likelihood that US farmers may not be able to recover the market share that it lost when the war began. In addition, a strong dollar may have exacerbated the problem for U.S. farmers, as a depreciating Brazilian real have made U.S. crops significantly less competitive.  Although some of the currency depreciation may have been due to Brazil lowering their interest rates, much of the depreciation to the U.S. dollar strengthens against global currencies. Last week, President Trump attempted to address the issue by imposing tariffs on Brazilian steel, but it is unlikely to help farmers anytime soon. As the U.S. and China come closer to securing an agreement, it will be interesting to see if the trade dispute will have any long-lasting damage.

Odds and ends:  The global use of the CNY continues to lag the size of the Chinese economy.  We suspect the lack of financial transparency and a less than open capital account are to blame.  The U.S. Army will directly fund rare earths production.  Strikes continue in France.