[Posted: 9:30 AM EDT] On the second day of the week, risk markets are rising.  Trade hopes seem to be part of the reason for the increase as U.S. and Chinese negotiators are planning meetings and setting timelines.[1]  It looks like the Meng arrest won’t derail trade talks.  There is a lot of news this morning.  Here is what we are watching:

Meng doesn’t get bail: The Canadians denied Meng Wanzhou bail despite offers to wear a location bracelet.[2]  The Canadian judge has not decided on extradition yet, although we expect that she will eventually end up in the U.S.  Meanwhile, we are seeing some ramifications on the trade front, mostly with technology.[3]

Brexit vote postponed: The fallout from the likely defeat of PM May’s Brexit plan continues to accumulate.  Since her plan was doomed to defeat, she was forced to pull the vote and is now petitioning the EU for new terms.[4]  So far, her requests are facing a “non” response.[5]  While the EU would face some losses from a hard Brexit, it’s nothing compared to the difficulties the U.K. would likely suffer, although there is wide disparity in the forecasts.[6]  However, there is no doubt that the initial impact of a hard border between the EU and Britain would lead to serious disruptions that will take weeks, if not months, to adjust.[7]  It’s important to realize that the EU has an interest in a hard Brexit being a disaster.  That would curb the enthusiasm of other nations thinking of leaving the EU (e.g., Italy).  If it weren’t for the return of a hard border in Ireland, the EU may not have negotiated at all.  But, a hard Brexit will almost certainly bring a return of the troubles in Northern Ireland, something the British government really doesn’t want due to the costs of maintaining security and Ireland clearly doesn’t want that outcome, either.

Notably, the most likely driver of Brexit was immigration.  Polls show that at the time of the Brexit vote the EU wasn’t an issue but immigration was.  By framing Brexit as a way to gain control of the borders, the Leave campaign won a victory.[8]  Recent behavior in the EU has shown that the free movement of peoples has become mostly aspirational as even Merkel has softened her pro-refugee stance.[9]  Like everywhere in the West, immigration is becoming a critical issue, even though there is strong evidence to suggest that immigration is a net benefit to developed economies.[10]  However, it should be noted that there are distributional effects to immigration; in general, the wealthy tend to benefit the most from immigration while the poorest bear the costs.  If PM Cameron had simply put up restrictions to immigration before the Brexit vote, it may have failed.  But, that would have undermined his personal class interests.  What about a second referendum?  Although there is support for a new vote, it begs the question…will the elites continue to hold referendums until they get the outcome they want?  What if the majority vote to leave again?  Or, if the vote reverses, have you created a permanent “opposition class” that will be an indefinite problem?

The path forward is becoming increasingly difficult.  Labour is pushing for a no-confidence measure that would likely lead to new elections and quite likely a Corbyn-led Labour government.  The Tories don’t want that outcome but to move forward they may need to settle on a new party leader and PM and there is no clear leader.  Meanwhile, financial markets remain under pressure and the GBP has been weak.  At the same time, based on purchasing power parity, the GBP is remarkably cheap. 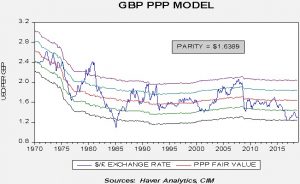 This chart shows the GBP parity model with standard error bands.  The only time the GBP has been cheaper was at the peak of the dollar strength in 1985.  If a hard Brexit is avoided, the potential for a rally in the currency is significant.

Macron blinks: In a bid to placate protestors, French President Macron gave an address yesterday and promised various fiscal measures to help the middle class and working poor, including a minimum wage hike.[11]  It remains to be seen if these actions will quell unrest.  However, there is one serious side effect from Macron’s spending—it could boost the French deficit/GDP ratio next year to 3.5%, well above the 3% limit established by EU treaty.  France has repeatedly had deficits that exceed the limit but it has never faced scrutiny due to its influence in the EU. 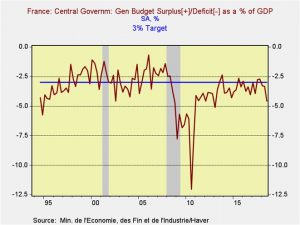 Italy’s deficit is only 2.4% but the EU has issues with the structural nature of the deficit, which means the deficit could reach higher levels in recessions.  However, that distinction will be lost on the average Italian voter;[12] this issue will look like the famous phrase, “all animals are equal but some are more equal than others.”[13]

New leader of the CDU: Chancellor Merkel won a significant victory, with her favored candidate, Annegret Kramp-Karrenbauer (henceforth to be known as AKK), winning party leadership.[14]  Although the margin was narrow (51.8/48.5), AKK’s win means Merkel will remain chancellor for the time being.  AKK is considered a “mini-Merkel” by the media and promised to continue the policies of her predecessor.  Still, this is a victory for EU stability and is modestly bullish for the EUR.