[Posted: 9:30 AM EDT] Monday, Monday…global equity markets have been coming under pressure but U.S. equity futures have recovered in the past hour.  It looks like pessimism has become excessive and maybe a rebound is in the offing.  Here is what we are watching:

Equities remain jittery: Friday’s equity market action was poor, to say the least.  Even with hopes of a trade truce and evidence that the FOMC is easing up, equity market action has the look of selling into every rally.[1]  Some degree of caution is understandable.  The trade tensions with China have the potential to undermine the high margin, low inflation environment that has been in place since 1990.  The tech sector is deeply dependent on Chinese supply chains and a significant disruption of those relationships will take months, if not years, to restructure.  This is why technology is under pressure.

At the same time, the White House has to make a political calculation.[2]  Pushing against China is going to be a long-term trend; American policy has shifted to see China as a strategic competitor, meaning the open system of building capacity in China to take advantage of low labor costs and flexibility is going to end at some point.  However, there is always an element of “Augustine’s dictum”[3] in such affairs because the immediate disruption is costly, which adversely affects the current political leadership only to benefit the successors.  The president has to decide if the hardline stance on China will be popular enough with voters that they will accept slower growth and higher inflation.  It’s a risky bet; if he decides it isn’t worth it we could see the trade truce broadened to support the re-election effort.  We have no doubt that long-term relations with China will be different and likely hostile.  However, there will be an incentive to delay the “long term” for a couple of years.

Chinese tensions remain: Meng Wanzhou remains in custody in British Columbia as China has summoned the U.S. ambassador to China, Terry Brandstad, to visit officials in Beijing to receive a “solemn protest.”  China has also threatened Canada with “serious consequences” for the arrest.  There is fear the arrest could threaten the U.S./China trade truce, but Robert Lighthizer, the USTR, said over the weekend that the arrest “shouldn’t have much of an impact” on trade issues, suggesting the two issues will remain separate.[4]  Although the Meng arrest is a serious matter, it appears there is a concerted effort to isolate trade from the arrest.[5]  Meanwhile, Lighthizer did insist that the truce deadline is March 1, 2019, suggesting the talks won’t linger.[6]

Brexit vote postponed: PM May, facing an inevitable defeat tomorrow, has pulled the vote on her Brexit plan.[7]  Her “this or nothing” stance was undermined by a European Court of Justice ruling that indicated the U.K. could unilaterally withdraw from Brexit,[8] meaning there are alternatives to her plan.  Not only that, but the judges have ruled that the returning party after an Article 50 declaration could return under the same conditions that existed before it left.  One of the arguments made by the “leavers” is that a referendum decision to stay would be impossible because the EU would require the U.K. to give up the opt-out conditions it negotiated while in the EU, such as not having to join the Eurozone.  It looks to us that a second referendum is the most likely outcome; decision markets put the odds of a second referendum at 37%, up from 24% in late November.

Reserve Bank of India (RBI) governor resigns:[9] Urjit Patel quit after weeks of rising tensions between the Modi government and the central bank.  The government has been working to undermine the independence of the RBI as it wants to stimulate the economy in front of elections next year.  Patel vigorously defended the independence of the bank to no avail.  One of the key points to remember is that all central banks, including the Federal Reserve, have their independence only because elected officials grant them that power.  He who gives can take away.  If the political leaders of a country are moving to reflate an economy, weakening central bank independence is a key element in accomplishing that goal.  The effective ouster of Patel will allow Modi to appoint a more compliant governor and could lead to unanchored inflation expectations for India.

India’s inflation has been under control for the past five years; the move against Patel could undermine that benefit. 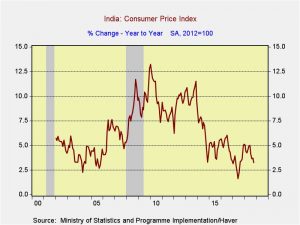 Fed talk: Last week, we noted that FOMC members have become increasingly cautious about the path of policy tightening and noted that financial markets have been steadily lowering expectations for future rate hikes.  St. Louis FRB President Bullard, perhaps the most dovish member of the FOMC, did come out last week supporting a pause.[10]  Although we still expect the Fed to raise rates next week, we also expect language that will allow them to pause after this move.

Turkey thaw?  The NY prosecutor’s office has withdrawn an appeal to extend the sentence[11] of Hakan Atilla, a former executive of Halkbank.  Atilla and his former employer were convicted of violating Iranian sanctions; Atilla was given a 32-month sentence, a duration the prosecution believed was too lenient.  Thus, the NY prosecutor had petitioned the court to extend his sentence.  The Erdogan administration has been pushing the U.S. on this case, wanting Atilla to serve the rest of his sentence in Turkey.  The NY prosecutor’s withdrawal decision suggests the U.S. may be negotiating with Turkey on a whole host of issues, including Saudi Arabia.  We have been expecting some sort of quid pro quo on Turkey and Saudi Arabia; although it is still too early to tell, this action might be part of a broader scheme that would end up easing pressure on Turkey.

Google (GOOGL, 1046.58) in the barrel: Google’s CEO, Sundar Pichai, will appear before Congress tomorrow.[12]  The company has mostly avoided the same level of congressional scrutiny other tech companies have faced in recent months.  However, there are concerns about the company’s dominance and its privacy policies.  Although much of what we will hear tomorrow will be grandstanding, the fact that there is bipartisan anger with the tech companies does signal a significant change in attitude toward the sector.

Italy’s League facing pressure: As we have noted recently, Italy’s populist coalition, a rarity in government, is facing internal pressure.  The coalition, which includes the left-wing populist Five-Star Movement and the right-wing populist League, is unusual because the two populist wings tend to not get along.  However, a major constituency of the League, small businesses in northern Italy, is upset with higher interest rates and the budget fight, viewing it as bad for business.  It is unclear if this issue will escalate, but the tensions are worth monitoring.[13]

French protests: There were protests in Paris over the weekend but an overwhelming police presence seemed to limit the damage.  Still, the protests are having an impact.  President Macron continues to struggle to make an effective response.[14]  The Bank of France (the country’s individual central bank) has reduced its Q4 GDP forecast from 1.6% (annualized) to 0.8% due to the disruptions caused by the protests.