[Posted: 9:30 AM EST] The reason for yesterday’s price strength is based on hopes that OPEC will cut output.  Here are some of the details from the agreement:

We have compared the quota arrangements to Bloomberg’s October estimate, the OPEC “reference” of November production and what the quota change is in relation to both.  On the table, we have highlighted three nations in yellow.  Indonesia suspended its membership (presently, it’s an oil importer and OPEC is an oil exporter club) and thus has no quota, while Nigeria and Libya were also not given quotas due to local unrest.  The cuts are not inconsequential; compared to the Bloomberg estimate, we have cuts of nearly 1.3 mbpd.  This is somewhat less than advertised, but still significant.  The deal is contingent on output cut pledges of 600 kbpd from non-OPEC members.  According to Bloomberg, about 500 kbpd has been pledged, with Russia cutting 300 kpbd, Mexico 150 kbpd and Oman about 45 kbpd.  Russia says it will cut during H1 2017, so it could be a while before its cuts occur.  It should also be noted that these cuts are not effective until January, therefore we would expect high production levels this month.

So, will oil prices remain firm?  Probably, although we have serious doubts that Russia will cut production at levels anywhere near its pledge.  We look for Iranian and Angolan production to rise from October levels.  On the other hand, we do expect the Gulf States to keep their word and these nations account for 1.011 mbpd of the cuts.  Thus, we will almost certainly see a cut of this amount even if the others fail to meet their obligations.  This means, conservatively, we can expect production of around 33.0 mbpd in January.

Will this reduce the supply overhang?  It will help, but declines of magnitude will only materialize if U.S. output doesn’t lift, which is probably an optimistic assumption.  Dan Yergin, a well-respected oil analyst, suggests that U.S. production will probably rise 0.3 to 0.5 mbpd in 2017 due to higher prices from this agreement.  That would fill about half of the Gulf States’ cuts.  Although optimism is clearly running high right now, in the end, the key unknown is whether this deal will reduce the current oil supply overhang.  We should see some progress but, as we detail below, current prices have already discounted significant inventory reduction in an environment of a strong dollar.

This chart shows current crude oil inventories, both over the long term and the last decade.  We have added the estimated level of lease stocks to maintain the consistency of the data.  As the chart below shows, seasonally, we should see inventories tend to stabilize into the end of November and decline into year’s end. 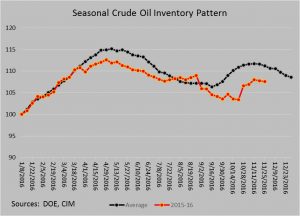 Based on inventories alone, oil prices are overvalued with the fair value price of $38.80.  Meanwhile, the EUR/WTI model generates a fair value of $39.78.  Together (which is a more sound methodology), fair value is $37.50, meaning that current prices are well above fair value.  Assuming a €/$ exchange rate of 1.060, $50 WTI has discounted oil stocks at 401 mb, about 118 mb below current levels.  Although we expect the oil market to give OPEC the benefit of the doubt, some period of consolidation at these levels would make sense.

The GBP jumped today on reports that Brexit Secretary Davis is considering paying the EU for access to the single market.  Fears that firms would be prevented from accessing the single market for finance has pressured the U.K. currency; however, if the May government can maintain access to the EU, much of the negative economic impact from Brexit would be mitigated.  As we have noted before, the GBP is deeply undervalued on a parity basis so this news should be supportive for the currency.