Good morning!  So far this morning, financial markets are in risk-on mode.  However, we warn there is a torrent of news this morning that could change sentiment.  We start with a quick run of headlines before we dive into the FOMC’s decision yesterday.

Our coverage begins with a recap of the FOMC decision.  Our regular reporting starts with China news.  The update on economics and policy comes next; it looks like Build Back Better won’t be passed this year.  The international roundup follows, and we close with pandemic news.

The FOMC:  The Fed issued a hawkish statement yesterday, doubling the pace of its taper and signaling, through the dots plot, rate hikes next year.  Here is a snapshot of the dots. 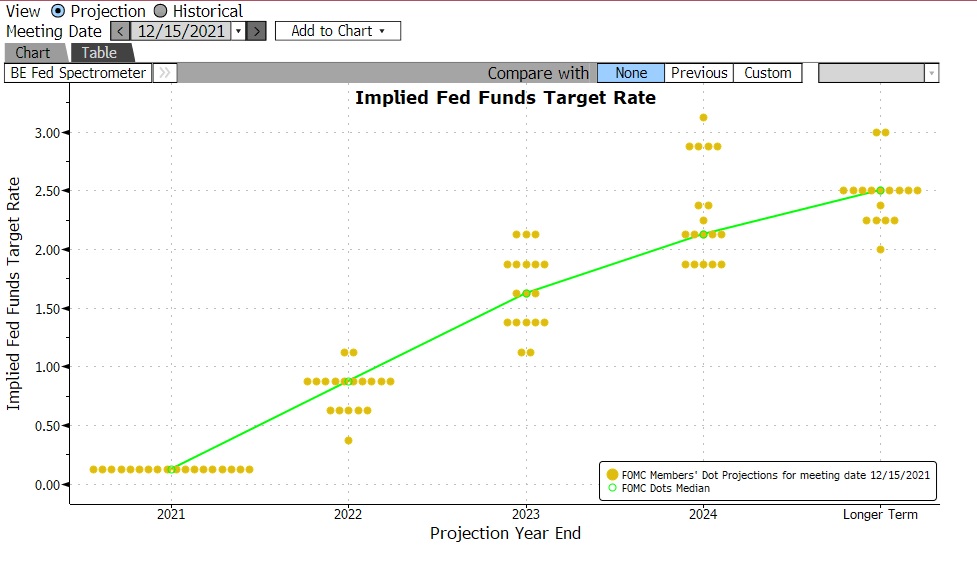 And, the September meeting. 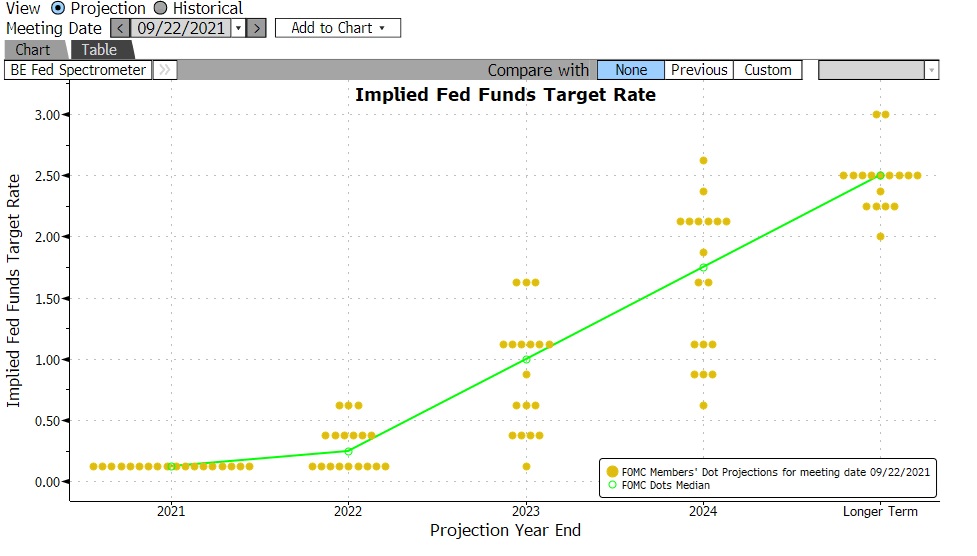 The difference is that at the September meeting, there was one rate hike projected by a small majority.  Most of the tightening was projected for 2023.  That has clearly changed.  The majority is projecting a 0.875% fed funds target by year’s end, which is three rate hikes.  Fifteen of 18 members project two to three rate hikes, and no member signaled no change in rates.  Even the most dovish (Kashkari, Minneapolis FRB most likely) has moved to one rate hike.  The expansion of the balance sheet is set to end by March.

In the economic projections, members are expecting inflation to fall; the core PCE forecast is for 2.7%, up from 2.3% in September.  GDP is also expected to rise to 4.0% from 3.8% in September.  In Powell’s comments, he suggests we are near full employment.  There is evidence that confirms that position, although other evidence suggests otherwise.  In a sense, the decision suggests the Fed has concluded that the pandemic has changed the labor markets, and using the pre-pandemic levels as a benchmark is no longer appropriate.  This means the Fed can declare victory on the labor front and move to confront inflation directly.

Here are our thoughts:

China news:  The U.S. continues to restrict trade with China.

Economics and policy:  Build Back Better won’t get passed this year, and new money market regulations may be coming.

COVID-19:  The number of reported cases is 272,336,362, with 5,332,813 fatalities.  In the U.S., there are 50,374,554 confirmed cases with 802,511 deaths.  Data show that infection rates are rising rapidly, but so far, fatalities have not, raising hope that the highly infectious Omicron variant may not be as deadly as the earlier version.  For illustration purposes, the FT has created an interactive chart that allows one to compare cases across nations using similar scaling metrics.  The FT has also issued an economic tracker that looks across countries with high-frequency data on various factors.  The CDC reports that 599,876,215 doses of the vaccine have been distributed with 488,296,089 doses injected.  The number receiving at least one dose is 239,975,167, while the number receiving second doses, which would grant the highest level of immunity, is 202,845,886.  For the population older than 18, 72.2% of the population has been fully vaccinated, with 61.1% of the entire population fully vaccinated.  The FT has a page on global vaccine distribution.  The Axios map shows increasing cases across most of the East and Midwest.  The mountain states and high plains are seeing falling cases.

[1] Small wars or operations to stabilize areas, such as Vietnam, Iraq, Afghanistan, or the heavy commitment to NATO.