Good morning and happy Monday!  Risk markets are higher this morning as the traditional equity rally into Christmas (the “Santa Claus rally”) appears to be shaping up.  It’s central bank week; coverage of the Fed leads off our coverage this morning.  Economics and policy come next as inflation dominates the news.  We then move on to the international roundup followed by China news, and we close with the pandemic update.

Central banks:  The FOMC meets this week in what is widely expected to be a hawkish meeting.  However, it isn’t the only central bank meeting this week.  The BOE, BOJ, and ECB, along with a plethora of other banks[1] around the world, are gathering amidst rising inflation.  The Fed is being pushed by the markets, pundits, and, surprisingly, the political class as well.  And, among the latter, there are moderate Democrats pressing the FOMC to tighten policy as worries about inflation mount.  We doubt left-wing populists share this desire, but so far, their voices have not risen; their voices will likely rise as tightening begins.

So far, equity markets are showing little concern about policy tightening.  It is not unusual for markets, at the early stages of tightening, to expect a “soft landing,” a rate hike cycle that doesn’t result in a recession.  This position highlights that equity markets are generally driven by optimists, because the track record shows that soft landings are rare.  The item to watch is the 10-year T-note/fed funds spread. 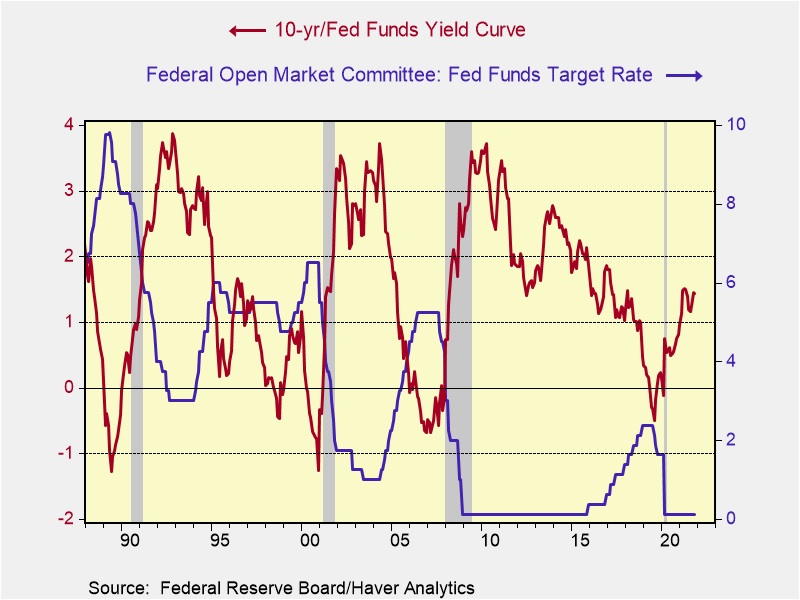 So, what does the spread tell us now?  First, the Fed can take the fed funds target to 1.25% to 1.50%.  For now.  But if 10-year yields fall as the fed funds rate rises, the FOMC may not be able to raise rates that high without inverting this spread.  Second, even with this policy tightening, monetary policy will still be easy; we expect CPI inflation to fall to the 3.0% to 3.5% range next year, and so there is little chance that we will get a positive real fed funds rate.  To achieve that outcome, a recession would be almost a certainty.  For now, financial markets are putting odds that the first rate hike will occur at the meeting on May 4, 2022.

Economics and policy:  Build Back Better looks like it won’t get passed in 2021 and inflation worries remain elevated.

China news:  The diplomatic boycott may be mostly an Anglo-Saxon affair.

COVID-19:  The number of reported cases is 270,252,555, with 5,308,651 fatalities.  In the U.S., there are 49,921,422 confirmed cases, with 797,348 deaths.  For illustration purposes, the FT has created an interactive chart that allows one to compare cases across nations using similar scaling metrics.  The FT has also issued an economic tracker that looks across countries with high frequency data on various factors.  The CDC reports that 594,475,575 doses of the vaccine have been distributed, with 484,190,896 doses injected.  The number receiving at least one dose is 239,008,166, while the number receiving second doses, which would grant the highest level of immunity, is 201,975,235.  For the population older than 18, 72.1% of the population has been fully vaccinated, with 60.8% of the entire population fully vaccinated.  The FT has a page on global vaccine distribution.