[Posted: 9:30 AM EDT] Markets are quiet this morning.  Here is what we are watching:

Trade update: Russia is facing another round of sanctions,[1] these tied to the chemical weapons poisoning in April of British citizen and former Russian spy Sergei Skripal and his daughter.  The sanctions are part of a specific U.S. law, the Chemical and Biological Weapons Control and Warfare Elimination Act.  The act is designed to punish nations that use chemical and biological weapons; it essentially denies export licenses for dual-use technologies.[2]  An interesting aspect of this law is that a second set of “draconian” sanctions will follow if Russia does not supply evidence that it is no longer using such weapons and does not allow on-site UN chemical weapons inspections within 90 days.[3]

Needless to say, Russia is furious about these new sanctions, although some of their effectiveness will be reduced if the EU doesn’t go along.  Attaining unity among the EU nations for sanctions will be hard as the new Italian government has been quite friendly to Moscow and may not support action.  Russian financial assets, especially the RUB, weakened on the news.

China announced it is retaliating[4] against the recent tariffs from the Trump administration on $16 bn of Chinese goods.  Yesterday, we noted that Chinese officials were meeting for their annual meetings at the Beidaihe resort.  We have been hearing increased rumblings of discontent with Chairman Xi.  Although we don’t think his position is in doubt, it does appear the chairman is getting some criticism, with the focus being that he may have overplayed his hand with the U.S.[5]

Last month’s acclaimed meeting between President Trump and EC President Juncker did avert a trade war but the Europeans have indicated the promised trade talks won’t happen anytime soon.  According to reports, EU negotiators need another six weeks to prepare.  We suspect this is a stall tactic.  The Europeans are likely hoping that the GOP will lose legislative power in the mid-term elections which will distract the president and lead to a reduction in trade pressure.

A comment on Tuesday’s election: Missouri voters overwhelming rejected a “right-to-work” proposal that was on the ballot.  Right-to-work laws make “closed shops” illegal; in a closed shop, a worker doesn’t have to join the union but he must pay dues to the union as a condition of employment.  In an open shop, a worker can choose to accept or reject union representation and he is not required to pay dues if he rejects joining.  Unions argue that open shops encourage workers to “free ride” the union, getting the negotiated benefits without paying dues for representation.  Open shop advocates argue that no one should be forced to join a group they may not agree with.

Initially, the Missouri legislature, dominated by the GOP, passed a right-to-work measure but labor groups were able to gather enough petition signatures to bring the issue to the voters.  This lopsided win for labor in a deep red state is something of a surprise.  But, to use our “identity and class” paradigm we discussed in a recent WGR,[6] it is quite likely that voters who would usually support Republicans were able to vote for their class interests on this specific issue, separate from their identity interests.  It is likely these union GOP voters would probably still support a Republican candidate, even if that candidate espoused a right-to-work position, because they would perceive their identity interests are being met even if their class interests are not.  Although this vote has raised some speculation that the labor rank and file might be moving back to the Democrats,[7] we doubt this is the case.  Identity interests are very strong.  What will be interesting to watch in the coming years is if the GOP begins to support labor-friendly policies to adapt to this part of the electorate and reject the business-friendly element of its constituency (the recent blow-up with the Kochs comes to mind).

Turkey and China: Turkey’s energy minister announced that China will build a nuclear power plant northwest of Istanbul.[8]  This news comes on the heels of comments from China’s ambassador to Syria, along with its military attaché, that China is open to the possibility of Chinese military operations in Syria to support the government.[9]  It appears that China’s interest is in preventing the Turkistan Islamic Party from training Uighur militants that operate in China’s far west Uighur province.  Although there has been no confirmation of China sending any military personnel, the comment itself is striking and further evidence that other nations are looking to fill the power vacuum created by the slow withdrawal of American influence.

Meanwhile, the U.S. and Turkey have been unable to resolve their differences on U.S. citizens being held in detention.  The TRY continues to probe new lows on the lack of progress.

Is a key support for Treasuries on the way out?  As part of the recent tax law, corporations have been granted a temporary tax break.  Companies can deduct their payments to pensions but the cut in the highest marginal rate, from 35% to 21%, reduces the value of those payments on a post-tax basis.  However, the tax law allows payments to pensions to be deducted at the old 35% rate until September 15.  Reports suggest firms have been aggressively taking advantage of this measure and buying long-dated Treasuries for their pension funds.  That may be part of the reason why longer dated Treasuries have performed well in recent months and could rally further as firms rush to take advantage of this loophole.  However, there is the potential for a rate back-up after mid-September when the measure expires.[10]  We would argue that the impact of this measure may be overstated, that continued low inflation and low inflation expectations are still more important to yields, but a back-up in yields next month might occur simply based on sentiment.

This chart shows current crude oil inventories, both over the long term and the last decade.  We have added the estimated level of lease stocks to maintain the consistency of the data.  As the chart shows, inventories remain historically high but have declined significantly since March 2017.  We would consider the overhang closed if stocks fall under 400 mb.  This week’s decrease in inventories was a bit less than expected as oil exports did not rise as much as anticipated.  We do note that U.S. production declined 0.1 mbpd to 10.5 mbpd. 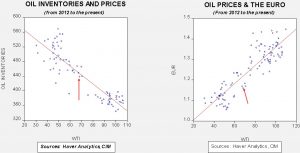 Based on inventories alone, oil prices are near the fair value price of $71.14.  Meanwhile, the EUR/WTI model generates a fair value of $59.18.  Together (which is a more sound methodology), fair value is $63.14, meaning that current prices are above fair value.  Currently, the oil market is dealing with divergent fundamental factors.  Falling oil inventories are fundamentally bullish but the stronger dollar is a bearish factor.  It should be noted that a 401 mb number by September would put the oil inventory/WTI model in the low $80s per barrel.  Although dollar strength could dampen that price action, oil prices should remain elevated.