Good morning! Markets are relatively quiet this morning after an impressive reversal in the equity markets yesterday.  We are seeing a backup in bond yields in the past hour on reports Germany may finally be considering fiscal expansion.  Here is what we are watching today:

China news:  For the first time since 2008, the “official” CNY/USD exchange rate was fixed at a level above 7, although it has been trading above that level intraday for the past few days.  Markets are not taking the news too badly because the fixing was stronger than the market was trading, suggesting the PBOC will probably be coming in to support the current level in the coming days.  At the same time, the currency weakening also reflects a slowing economy.  The weaker CNY will likely trigger similar currency declines across Asia.  Currency weakness will tend to help lift economic growth by boosting trade.  Right on cue, China’s trade data for July was stronger than forecast as exports rebounded and imports fell.  Exports to Europe unexpectedly increased while the drop in imports is consistent with a slowing economy.

News on trade was mixed.  China did indicate it was still willing to meet early next month while U.S. trade negotiators draw up a list of goods for tariffs.  It’s hard to see how talks can progress if the tariffs are expanded.  However, news that China was willing to meet contributed to yesterday’s equity rally. China continues to threaten to restrict rare earth exports, which would raise trade tensions.  China is also warning other nations against restricting their imports of Chinese technology.  The U.S. is preparing to ban Huawei (002502, CNY 2.83) technology purchases by the U.S. government.

Although there wasn’t much news from Hong Kong, Chinese officials continue to blame the U.S. for the tensions.  We haven’t seen any evidence that the U.S. is actively supporting the unrest, but it is a strongly held belief among the authoritarian governments that the “color revolutions” are U.S. backed.  That’s a much more comforting notion than believing that citizens aren’t happy.  Beijing is increasing its threats to intervene in Hong Kong if the unrest continues.

Earlier this week, we noted a BIS report that showed China’s dollar-denominated debt was significant, and thus limited the use of currency depreciation as a tool against tariffs.  The details suggest the risk is elevated because over 20% of the dollar lending has occurred in real estate.  If a weak CNY triggers a debt crisis in China, problems in the politically sensitive real estate sector could force Beijing to back down to U.S. demands.

Japan-South Korea:  Although tensions remain high regarding Seoul’s demand for reparations over Japan’s behavior on the Korean peninsula before and after World War II, there are signs the dispute may be cooling.  Japan today approved the export of a key chemical to South Korea, after imposing new export controls over it and other products last month.

A U.S./U.K. trade deal:  Brexit supporters argue that if Britain is free from the EU, it will be able to rapidly negotiate free trade deals across the world, giving a boost to the U.K. economy.  British officials have been discussing a deal with Washington.  SoS Pompeo supported this idea, suggesting he would “have pen in hand” to sign a measure quickly.   We have no doubts this is true.  However, British leverage in talks with the U.S. will be nil and the agreement they get will likely be heavily in America’s favor.  We would expect the U.S. to gain wide access to Britain’s agricultural industry, and finance would come under severe pressure.  Additionally, the British may have no choice other than to accept the terms.

Trouble in Italy:  Tensions within Italy’s ruling coalition continue to worsen, as League members in the Senate helped push through the approval of an Italy-France train link that the Five Star Movement has long opposed.  Disagreements over issues like tax cuts, regional governance, and relations with the European Union have increased the odds that Italy’s experiment with populist government may not last much longer.  Deputy PM Salvini is threatening to pull out of the current ruling coalition if the Five Star Movement doesn’t give into his demands for policy changes and a reshuffling of the cabinet.  The news has lifted Italian bond yields (in a context of falling global yields) and is raising worries about further tensions with the EU.  We have watched this coalition with great interest because it is the only working “Nader coalition” of right- and left-wing populists.  If this government fails, it will suggest that such coalitions are unstable and probably can’t function as governments.

Venezuela:  The U.S. has widened sanctions on Venezuela, implementing a near full embargo on the country.  In response, the Maduro government has withdrawn from talks with the opposition currently being held in Barbados.  Russia has now become the sole supplier of gasoline to Venezuela; it is unclear how the Maduro regime is paying for this product.  Most likely, Russia is supplying gasoline for geopolitical leverage.  Having such leverage over a country in the Western Hemisphere will be highly valued by Russian President Putin because it could help him meddle in regional affairs and keep the United States off balance.  We therefore expect Putin to continue his efforts to keep Venezuelan President Nicolás Maduro in power.  The action by Russia puts its firms at risk of secondary sanctions from the U.S.

Iran:  While Iran keeps harassing oil shipping in the Persian Gulf, new reports illustrate how the effort is sometimes imposing collateral damage on the regime’s few allies.  For example, even when Iran seizes a ship carrying cargo for the United Kingdom, the vessel might be crewed by Indian sailors.  When it seizes a British-owned ship, it might be carrying oil for China.  The risk of angering allies could potentially help mute Iran’s provocative action in the region.

Islamic State:  A report by the Pentagon’s inspector general says the pullout of U.S. military assets in Iraq and Syria is allowing Islamic State militants to regroup and regain their ability to mount attacks.

Food security:  The U.N. is warning that climate change is exacerbating soil erosion and shifting growing areas and seasons in such a fashion that food supplies may be threatened.

This chart shows the annual seasonal pattern for crude oil inventories.  The decline seen over the past few weeks now puts the level below the usual seasonal trough in September.  This week’s rise wasn’t a complete surprise as, at some point, imports were going to reflect a full return from hurricane disruptions. 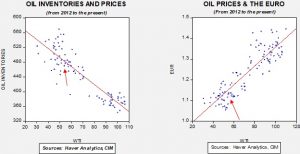 Based our oil inventory/price model, fair value is $61.35; using the euro/price model, fair value is $50.72.  The combined model, a broader analysis of the oil price, generates a fair value of $53.64.   We are seeing a clear divergence between the impact of the dollar and oil inventories.  If President Trump is successful in bringing the dollar lower, it would be bullish for oil prices.  Recession fears are acting as a bearish factor for oil prices as well, overcoming worries about geopolitical disruptions.

In other oil news, prices have rebounded from a sharp selloff on two items.  First, the perceived “pause” in China/U.S. trade tensions led to some buying and second, reports the Saudis were considering measures to shore up prices lifted bullish sentiment.  On a different note, Bahrain is reporting that it was hit with a cyber-attack that penetrated important infrastructure.  Iran is the likely attacker.