[Posted: 9:30 AM EDT] Equity markets continue to move higher across the globe as the dollar rises in the wake of Friday’s employment data.  We have seen two consecutive strong employment reports and this has raised expectations of tighter monetary policy.  As tightening expectations ramp up, the dollar is steadily appreciating.  The higher greenback is weighing on gold and the risk-on trend is putting mild pressure on Treasuries, although most of the pressure this morning is coming from a flattening yield curve.

The Chinese trade surplus came in better than expected (see below); however, imports fell significantly, while exports were also weaker than expected.  Falling imports improved the overall trade surplus, but the trend also signals weakening underlying growth.  In general, imports are one of the better signals of economic growth and slowing imports add to evidence that the Chinese economy is sluggish.  This week, CPC leaders are meeting at the seaside resort at Beidaihe, a traditional gathering spot.  The meetings at Beidaihe are informal in nature and no press conferences or communiqués are released, but this meeting will set the groundwork for important leadership changes looming next year.  2017 marks the end of Chairman Xi’s first term.  Five of the seven members of the Standing Committee of the Politburo reach retirement age by next year, meaning major turnover is likely.  It has been reported that relations between Premier Li and Chairman Xi have deteriorated; since Li has the formal mandate for economic policy, we will be watching to see if Xi tries to lift growth in the last year of his term, which would likely offer some support to Li, or if he allows the economy to flounder, blaming Li and using it as an excuse to fire him.  There is rising potential for unrest at the top of China’s power structure, which we will be monitoring as the next 18 months unfold.

We saw something rather odd from Australia in the wake of recent rate cuts.  The major banks cut lending rates in the aftermath of the RBA’s rate decision but raised deposit rates.  This move will, by design, cut margins.  It isn’t that such behavior is unprecedented; unfortunately, it tends to occur when a financial firm is in need of deposits and raises the price it will pay for them by raising the yield.  This situation may simply be a blip, but it bears watching.  In an interconnected world, a banking crisis in a large country could lead to unexpected outcomes.

Here’s a chart from Friday’s employment data that caught our attention.  This chart overlays the unemployment rate for those over 25 years old without a high school diploma or equivalent along with the core CPI.  Since 1997, the particular unemployment rate, with a six-month lag, does a reasonably good job of signaling changes to core CPI.  We suspect this category is the most difficult to employ in the current economy and thus is a measure of the relative tightness of the labor market.  History shows that when this unemployment rate approaches 6%, price levels tend to rise toward 2.5% to 3.0%.  We are already seeing some lift; the employment data suggests that a tighter labor market will probably support tighter monetary policy from the FOMC. 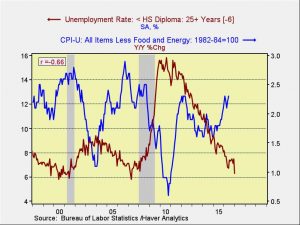