Central bank surprise:  The Reserve Bank of New Zealand, the Reserve Bank of India and the Bank of Thailand all moved to lower rates; the first two lowered rates more than forecast and the Bank of Thailand’s cut was unexpected.  Central banks around the world are becoming increasingly accommodative and these three banks are adding to the policy stimulus.  All the banks involved suggested that escalating trade tensions were having a negative impact on their respective economies.  As global trade war grinds on, we expect more countries to utilize monetary policy in order to defend their economies through weaker currencies. As the reserve currency, the US dollar will likely face upward pressure as capital flight will lead to many foreign investors seeking dollar denominated assets to hedge against inflation risk. As a result, there will likely be more pressure on the Federal Reserve to further cut rates and possibly resume balance sheet expansion.

All that glitters:  Gold is becoming increasingly popular with central banks.  Data from the World Gold Council indicates that gold demand in H1 was at a three year high with central banks buying 374.1 tons. This is the largest purchase for a “semester” in the 19-year history of the data series.  The PBOC and the Central Bank of Russia led the buying, with the Central Bank of the Republic of Turkey and National Bank of Kazakhstan also increasing their holdings.  The ECB has ended its agreement to limit gold purchases, which will likely lift central bank purchases going forward.  Exchange-traded product demand rose as well, while bullion sales actually contracted (this buyer is price sensitive).  What’s driving central bank behavior?  Uncertainty surrounding the reserve currency and falling opportunity cost from low (and increasingly negative) nominal interest rates.  Gold prices continue to lift this morning.

China trade:  Although factions in the White House continue to argue that a trade deal is possible, it is starting to dawn on pundits that this trade spat has broader ramifications.  For China, caving to U.S. demands is probably politically impossible.  This morning’s CNY fixing was just below 7.0 CNY.  It is becoming clear that China has likely decided that it won’t be able to strike an agreement with the Trump administration that isn’t designed to cripple its economy and contain its rise.  We have been watching a steady movement for a return to fixed exchange rates; supply side economist calls for a “return to the gold standard” is probably more about a return to fixed exchange rates.  Judy Shelton’s[1] comments seem to suggest that position.  China’s leaders believe that the “beginning of the end” for Japan’s rise was the Plaza Accord.  In 1985, the dollar was historically strong and the U.S. strong-armed Japan and Germany to work in concert with the U.S. to weaken the greenback.  By 1990, the Japanese economy peaked, and it has been stagnant ever since.  Beijing fears that Washington has designs on a similar program with the same outcome.[2]  Unlike Japan, economic stagnation in China would probably cause an epic political crisis.  Although the U.S. would probably struggle to achieve the same degree of cooperation it engineered nearly 35 years ago, it could likely achieve the same outcome by changing Fed policy.  Meanwhile, the U.S. courts have given increased power to U.S. regulators to seize records of foreign banks if those banks have corresponding accounts with U.S. banks.  VP Pence indicated the U.S. might use the Global Magnitsky Act to sanction Chinese officials over the Uighur internment camps, a move that will infuriate Beijing.

China’s foreign reserves in July fell $15.5 bn, about in line with expectations. 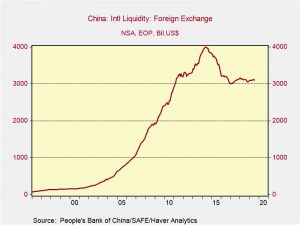 This data will be closely watched next month to see how China is using its foreign reserves to manage the CNY exchange rate.

One other interesting item of note on China.  There are reports that private companies are finding it difficult to get paid promptly, leading to the creation of an informal commercial acceptance market.  Although the PBOC is conducting policy easing, it appears that banks are mostly lending to state owned enterprises, likely for two reasons.  First, state support reduces credit risk and second, the banks may be perceiving a “nudge” from the government to support the state-owned sector.  These factors appear to have caused dearth of working capital and has led companies to accept IOU’s for receivables.  This development also suggests worries about the economy; after all, the banks probably earn a larger spread by lending to the private sector, so this news probably is signaling stress in the Chinese financial system.

Kashmir:  Both Pakistan and China warned India about its takeover of its area of control in Kashmir, which, up to now, had been granted a high level of autonomy.  We will have more to say on this issue in an upcoming WGR. 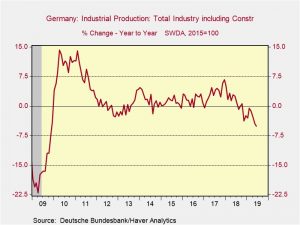 The industrial production reports suggest that weak demand for autos and slowing economic growth may be weighing on the German economy. As an export-driven economy, Germany relies heavily on the rest of the world to consume its excess production, therefore it is very vulnerable to global shocks. In fact, the slowdown in China may also be weighing on the Germany economy, as China represents a large market for German cars. The weakness in industrial production has led many to suspect the German economy may have contracted in the second quarter.

Brexit:  The twists in the Brexit saga continue to develop.  Sinn Fein holds seven seats in the House of Commons, but it has never put MPs in these seats because it won them by arguing for abstention.  Sinn Fein is the political wing of the Provisional Irish Republican Army, and holds the second largest set of seats from Northern Ireland.  The DUP, a part of the government, is a key member of the current ruling coalition.  Its policy of abstention is designed to protest the legitimacy of the government it was elected to; it wins the seats in elections but refuses to participate in the government’s activities.  If Sinn Fein wanted to bring the current government down, all it would have to do is seat MPs and refuse to join the government.  It would be a minority from that moment on.  Politically, it would rally the Tories because it would look like Irish radicals were scheming against the party.  However, if Sinn Fein called on its MPs to resign, by-elections would be held and if the party was willing to cede these seats to a coalition of Remainer candidates, they would probably win these districts.  That would likely push the current government into minority status, triggering new elections.

Another twist is that Boris Johnson is hinting that if he lost a no-confidence vote, he may simply refuse to stand down, or push the vote past Halloween, thus crashing the U.K. out of the EU.  There is some speculation that the Queen might intervene and remove Johnson from office, likely spurring a constitutional crisis of epic proportion.  We assume the Queen would prefer to avoid such an outcome at all costs, but the fact this potential outcome is even being discussed indicates just how far conditions have diverged from what one would consider normal.

North Korea issues warning? Last night, North Korea said that leader Kim Jong Un supervised the launch of two short-range ballistic missiles. The missile launch was likely a warning to the US over its plan to hold joint military exercises with South Korea.  At this time, it is unclear whether President Trump will condemn the launch, but if the past is any guide to the future, it is likely that the President will downplay it.

[1] Shelton is being considered for a FOMC governor position.

[2] Adding to that concern is that Robert Lighthizer played a key role in the negotiating team that led to Japan’s “voluntary” auto export curbs to the U.S.