[Posted: 9:30 AM EDT] Good morning! Risk assets are getting a bounce this morning.  Trade conflict with China remains front and center. Here are the details: 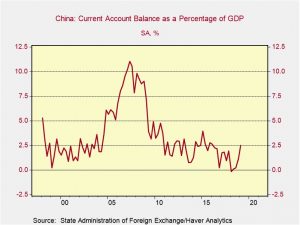 As this chart shows, China’s current account surplus relative to GDP is just above 2%.  In reality, China was an egregious violator from 2005 to 2009 but has become less so since.  Second, a nation in violation has to be actively intervening in the currency market; China has, but to prevent the CNY from depreciating.  So, yes, China is intervening but in a way to weaken its competitiveness, not raise it.  The third factor is the trade deficit with the U.S.   In this area, China is a clear problem.

So, what happens now?  The Treasury will ask the IMF to investigate China’s trade and currency practices to establish the degree of manipulation.  Then, in a year, if the allegation of manipulation is verified, then the U.S. and China will enter negotiations to remedy the problem.  If the talks fail, sanctions will be imposed.

To put a fine point on this action, nothing will likely come of it.  First, the manipulation China is engaging in is actually weakening China’s ability to export.  The IMF isn’t likely to find in America’s favor.  Second, given all the sanctions and tariffs already in place, it’s hard to see how China can be changed by additional tariffs.

So, why the fuss?  Of course, yesterday, the PBOC simply allowed the CNY to fall in the natural direction it would tend to move with the threat of sanctions.  However, this morning, the PBOC did come in and signal support for the CNY, raising hope that a full-blown currency war can be averted.  The PBOC’s action has lifted risk assets this morning, easing fears that China would simply allow its currency to fall precipitously.  However, this narrative probably isn’t accurate.  China isn’t lifting the CNY to help the U.S.  Instead, it is doing so for its own interests.  First, Chinese non-banks (generally Chinese non-financial companies) have huge dollar-denominated debt outstanding.  Currently at $501 bn, this debt represents 13.5% of total emerging market dollar-denominated debt.  If the CNY depreciates, it raises the debt service cost for dollar-borrowers.  Second, a weaker CNY in the past has triggered capital flight.  Although China has extensive capital controls, they are not completely effective, and a falling currency tends to encourage wealthy Chinese to find ways to evade them.

Devaluation has other ill effects.  Other nations that compete with China won’t allow a weaker CNY to undermine their exports; if China were to take definitive action to depress the CNY, it would likely cause a global dollar appreciation.  In addition, currency depreciation is counter-productive to China’s long term economic restructuring.  The net effect of a weaker currency is to depress household consumption.  That’s because it raises import prices and reduces the real income of households.  A weaker CNY benefits the bloated investment sector at the expense of households.

So, if all this is true, why the designation?  The optics suggest a narrative of action and often in politics the illusion of action is beneficial.  The Trump administration is targeting China, in part, because of the huge trade deficit with the U.S.  But, there is a bigger issue; the White House is slowly discovering that when you provide the reserve currency to the world, the rest of the world has an incentive to acquire your currency through trade.  Tariffs tend to be ineffective in this environment, in part, because nations can depreciate their currencies to offset the tariff.  What the president really wants, we think, is a return to fixed exchange rates.  Once fixed, the U.S. can force the cost of adjustment to foreigners via trade impediments.  But, the only way to achieve fixed exchange rates is to either (a) deploy capital controls, or (b) remove the Fed’s independence and make maintenance of the exchange rate the sole policy goal.  We are betting on (b), despite protests.

Where does this end?  We don’t see either leader caving.  Although China’s position is inferior (in a trade war, the surplus nation is always in a worse position—a good historical example is the Great Depression, which severely affected the U.S., the China of its day), the real question is which society can endure the most pain?  President Trump faces voters in November 2020.  An economy in recession a year prior has been a consistent indicator that an incumbent will lose.  In a full-blown trade war, easy monetary policy might not be enough to prevent a downturn.  But, our view is that President Trump doesn’t believe tariffs are bad for the U.S. economy and thus has no fear of a trade conflict.  On the other hand, although President Xi faces pressure as well, he is president for life.  In the short run, Xi can likely inflict more pain on his citizens than President Trump.  In the long run, that may not be the case.  If the U.S. thwarts China’s rise, the unrest could topple the CPC.  For financial markets, the risks are rising.

China-Hong Kong:  After Hong Kong was paralyzed yesterday by more anti-Chinese political demonstrations and its first general strike in 50 years, the Chinese government’s Hong Kong and Macau Affairs Office today issued a new, thinly veiled threat of intervention.  A spokesman for the office warned the protestors not to “misread the current situation [or] mistake restraint for weakness.”  When asked if the People’s Liberation Army of mainland police might be sent into Hong Kong, the spokesman merely said the government wouldn’t allow anything to threaten the country’s political system.  The spokesman also reiterated China’s recent line that the United States has secretly been instigating the unrest in the city.

Persian Gulf:  The U.K. has decided to join the U.S. program to protect shipping in the Persian Gulf.  Given that the U.K. wants to leave the EU and will need to cleave to the U.S. in the future, this action makes sense.

A no-confidence vote:  Labour leader Corbyn has threatened a no-confidence vote to prevent a no-deal Brexit.  The problem for Corbyn is that it isn’t clear if Labour would win an election because the key issue is Brexit and the Labour Party is divided on this topic.  Instead, we might see a broad Remain coalition of Liberal-Democrats, Scottish nationalists, the Greens and independent MPs from Labour and the Conservatives.

Japan:  As yesterday’s U.S.-China trade tensions prompted safe-haven buying and drove the yen higher, Japanese officials from the Finance Ministry, Financial Services Agency and Bank of Japan held an emergency meeting to decide how to respond.  Afterward, Vice Finance Minister for International Affairs Yoshiki Takeuchi said that if the currency moves start to hurt the economy or financial markets, then the government would take action, but only within the limits of its G7 and G20 commitments.  All the same, the government may also try to intervene secretly by directing its pension fund to buy more foreign assets.

Japan-South Korea:  As tensions continue to rise over Seoul’s demand that Japan provide reparations for its treatment of South Korea before and during World War II, today Japanese Prime Minister Shinzo Abe accused Seoul of violating the two countries’ 1965 compensation agreement.  In a more dangerous move, the South Korean military is reportedly considering military drills this month on a set of islands in the Sea of Japan that are claimed by both countries.

Australia:  The Reserve Bank of Australia today held its benchmark short-term interest rate at a record low of 1.0%, as expected.  The decision to hold rates steady came after two straight rate cuts, but the policymakers signaled further rate cuts may be needed to counter slower economic growth around the world, a weaker domestic housing market and subdued inflation.

Russia:  Following the U.S. withdrawal from the Intermediate-Range Nuclear Forces Treaty last week and the Trump Administration’s plan to deploy new short- and intermediate-rate missiles to Asia, Russian President Putin has vowed to match whatever new missiles the United States develops.  Putin also ordered increased spying on the United States in order to track its development of any new missiles.  Separately, the Chinese Foreign Ministry’s arms control department warned that China would take “countermeasures” against any U.S. deployment of new, ground-based, short- or intermediate-range missiles in the Asia-Pacific region.

North Korea:  The North Korean military has tested short-range missiles again for the fourth time in less than two weeks, as leader Kim Jong Un registers his displeasure over upcoming U.S.-South Korean military exercises and seeks to pressure the United States for concessions on its nuclear program.

Venezuela:  The United States announced a nearly total economic embargo on Venezuela yesterday, intensifying its effort to drive President Nicolás Maduro from office.  President Trump signed an executive order to freeze all the Venezuelan government’s assets under U.S. jurisdiction, prohibit any entity worldwide from transacting with it, and sanction any foreigners who provide support to it.

Negative interest rates:  UBS (UBS, $10.89) announced it will begin applying negative interest rates to large accounts.  With the entire yield curves of Germany and Switzerland in negative territory, banks have been effectively subsidizing depositors by merely holding their cash at a zero rate.  Banks have been avoiding applying overtly negative rates to depositors, in part fearing disintermediation of cash.  Given the size of UBS, Switzerland’s largest wealth manager, it is likely other banks will follow suit.  We will be watching closely to see if this trend spreads and the reaction of investors.