[Posted: 9:30 AM EDT] The big news today is that the BOE cut rates 25 bps, to 0.25%, and clearly signaled a move to zero by year’s end.  It also increased QE by £60 bn and will include corporate bonds in its purchases.  This is the bank’s first rate cut in seven years.  Although the initial rate cut was well discounted by the markets, the expansion of QE and the forward guidance was a surprise.  The U.K. central bank cut its GDP forecast for 2017 to 0.8% from 2.2%; it seems to believe that its measures will either prevent a recession or make it mild enough that it won’t lead to a year’s worth of negative growth.  The BOE also bumped up its inflation forecast, but still has inflation not reaching its 2% target until December 2017.

Because of the surprise, the GBP slumped.

We have also seen a strong rally in Treasuries on the news.

Inventories remain elevated.  Inventory accumulation levels had been running below seasonal norms; this week, the divergence disappeared.  We are in a period of the year when crude oil stockpiles tend to fall at a slowing pace; in fact, this month, declines slowed markedly.  Oil prices rose due to a surprise 3.3 mb draw in gasoline stocks.  Although clearly bullish for gasoline, the “clock” is running on this product as the summer driving season rapidly comes to a close.  Still, for an oversold market, it was the catalyst for an impressive rally. 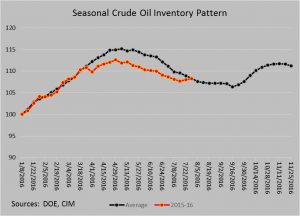 This week’s data closes out July. 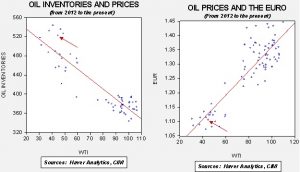 Based on inventories alone, oil prices are profoundly overvalued at the fair value price of $35.45.  Meanwhile, the EUR/WTI model generates a fair value of $45.83.  Together (which is a more sound methodology), fair value is $40.07, meaning that current prices are generally fairly valued.  Given that we don’t expect significant declines in inventory over the coming weeks, the key to oil prices probably rests with the dollar.  It is worth noting that this decline we have seen from the highs merely puts us in the neighborhood of fair value, but oil isn’t undervalued by our measures.  In about six weeks, oil inventories should make their seasonal lows and build about 7%, or put inventories around 530 mb by November.  Although current prices are not unattractive, a dip into the mid-$30s for WTI is possible with a steady dollar.