[Posted: 9:30 AM EDT] So, we have to say “goodbye” to summer…and have a great Labor Day!  Here is what we are watching today:

Emerging fears: The two problem nations, Argentina and Turkey, continue to struggle.  Argentina has taken a beating; the currency is plunging to new depths and overnight interest rates have been ratcheted up to 60%.

This is a long-term chart of the ARS, starting in 1992.  The currency is clearly in a freefall.  For comparison purposes, note the chart below.

This chart shows the same chart above, but on a log scale (Bloomberg doesn’t have the capability to invert a log scale chart).  Note that on a percentage basis, the 2002 depreciation was very large even relative to what we are seeing now.  Thus, the decline, though historic in terms of level, is not out of the ordinary in terms of change.

How did Argentina address the problem in 2002?  With fiscal austerity. 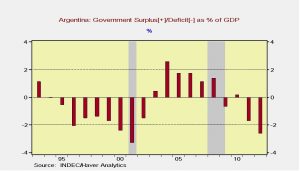 Argentina will likely receive help from the IMF in the form of accelerated payments.  But, the IMF will demand fiscal austerity in return; history shows it will stabilize the situation.  However, it won’t bring recovery and the political costs of austerity are high and unsustainable as we have seen from the country’s history.  Thus, we don’t expect a long-term resolution to this problem.

Turkey was back in the news this morning as President Erdogan indicated his country would remain defiant in the face of U.S. financial pressure.  The country did raise taxes on dollar deposits, which has helped stabilize the TRY this morning.[1]

The continued turmoil in Turkey and Argentina are putting downward pressure on emerging markets, in general.  Adding to pressure are comments yesterday from the White House.

More from Trump on trade: In a wide-ranging interview yesterday with Bloomberg, President Trump indicated he wants to see an additional $200 bn of tariffs applied on Chinese goods.  And, he suggested the WTO needs to “shape up” or the U.S. might withdraw from the body.[2]  We have seen equities rally recently on optimism that the White House was moving in a direction to focus its trade actions on China.  However, in yesterday’s interview, the president scotched those hopes and even piled onto them, criticizing the EU and rejecting the auto proposal made yesterday.  European automaker equities reversed gains made yesterday morning on trade hopes.

Out of everything in the interview, the most concerning to us is the potential rejection of the WTO.  The administration has been working to undermine the organization for some time, mostly by refusing to approve tribunal judges.  Due to retirements, we are rapidly moving toward a situation where the WTO will not have enough judges to adjudicate claims.  At that point, the trade body will essentially be unable to perform its functions.  A U.S. withdrawal would pretty much overtly signal the end of the U.S.-built trade structure that was initially created after WWII.

We have noted that American actions are causing adjustments in the world order.  For example, Japan and China, longtime adversaries, are meeting.  Both nations are feeling pressure from Washington and so, even though they have areas of conflict, concerns over trade are encouraging discussions.[3]  It has been our position for some time that the U.S. is reducing its global hegemony and the most likely outcome is a leaderless world where regional hegemons dominate security and trading arrangements.  Japan may be concluding that the U.S. is no longer a reliable partner and thus is better off making arrangements with China to preserve its economy and security.  Warmer relations between China and Japan would almost certainly lead the rest of the Asian powers to consider joining such a bloc (although India would try to hold out).  We view such a world as unstable, although the U.S. will likely be able to avoid regional turmoil for some time.

NAFTA: Although negotiations continue, there is growing concern that a deal might not be reached.  The CAD has dipped this morning on worries that negotiations may fail.  We do think the odds favor an agreement.