Russian bank problem: Otkritie is a bank in Russia that has become insolvent.  The bank has close ties to the government and has apparently enjoyed rapid growth by absorbing the assets of smaller failed banks, often buying the assets at a deep discount.  Some of the deals are less than transparent and there are concerns that the bank’s management may have enriched itself at the expense of the state.  Otkritie represents about 3.7% of Russian bank assets,[1] making it the fourth largest bank in the country.  This is important because, if not contained, it could trigger a broader financial panic.  Although we do expect the Russian central bank to engineer a bailout, the potential for a broader problem does exist.  Bank panics are crises of confidence; they can occur easily and once underway become difficult to contain.

Kurds to vote: The Kirkuk Provincial Council voted on Tuesday to hold a Kurdistan independence referendum on September 25.  Iraq, the U.S. and Turkey will oppose this vote because a “yes” vote could begin the process of a Kurdish breakaway region.  Although Iraq probably can’t militarily force the Kurds to remain in Iraq, Turkey does have the capacity to prevent the creation of a Kurdish state, something it has opposed for nearly a century.  This vote should be viewed in the broader context that the post-WWI borders drawn up by French and British colonialists are steadily eroding and creating conditions where conflict could become constant.

New America: The NYT reports[2] that the New America Foundation, a center-left policy shop, has fired one of its members, Barry Linn.  Linn was the director of the Open Markets program that operated at New America.  Linn was thus part of the think tank and wrote extensively on the dangers of industry concentration, especially in technology.  According to reports, Linn supported the EU’s recent €2.4 bn fine on Google (GOOGL, 943.63). [3]  All this seems rather appropriate; an analyst who studies industry concentration commenting on a fine levied by a legitimate government against anti-competitive behavior would be a normal part of the job.  However, New America received more than $21 mm in funding from Google and others tied to the company.  Eric Schmidt, Google’s executive chairman, was also the chairman of New America until last year.  Linn’s comments were taken down from New America’s website, but then they returned.  Later, Linn was relieved of his duties.

We have watched the steady concentration of market power in the tech sector for years.  As students of history, the behavior of the tech industry now is strikingly similar to the behavior of the robber barons of 1890-1910.  It should be noted that the former era ended when President Teddy Roosevelt began a trust-busting campaign that eventually led to the Sherman Anti-Trust act.

Why do we comment on this?  First, equity markets have been supported by the performance of the tech sector, especially the large cap area of the sector.  Although there is no doubt that the companies in this sector provide wildly popular products and services, they are sometimes provided from the aggressive suppression of wages.  In the earlier era, the trusts often abused their market power by high prices.  The tech companies, for the most part, don’t act in this fashion.  In fact, their influence in improving market transparency is one of the causal factors for keeping inflation at bay (technology’s role in globalization should not be underestimated either).  But, the tech firms have kept a lid on wage growth, sometimes through nefarious means.[4]  Although Google denies any role in Linn’s firing, it looks pretty obvious that Anne-Marie Slaughter[5] felt compelled to quash Linn’s complaints.  If the government concludes that the tech sector’s influence has become dangerous, we could see attempts to constrain it through regulation.  This could mean that the large firms are broken up (à la Standard Oil) or heavily regulated, which may affect equity market performance.

Second, the tech issue exposes the political fault lines in the U.S.  The center-left establishment, primarily the establishment of the Democrat Party, is tightly aligned with the tech sector.  Technology has less representation in the center-right, the establishment wing of the GOP.  Interestingly enough, populist leaders on both the right and left are becoming quite jaded with the tech firms.[6]  Political support for the tech sector may be narrowing, which may increase the likelihood that an adverse regulatory environment will develop.

We live in an age of mostly unfettered technological change; that wasn’t always the case.  In the past, regulators would slow the advent of new technology through regulations that made the investment in new technology appear less attractive.  As a thought experiment, how attractive would it look to shift to driverless trucks if two human drivers had to be in the cab and paid even if they had nothing to do?  In an era of low inflation and low inflation expectations, there will be a growing temptation to preserve jobs by limiting the disruptive effects of technological change.  The “ham-fisted” firing of Mr. Linn is perhaps an indication that the sector’s leaders are becoming concerned.  This is a trend we will continue to monitor.

This chart shows current crude oil inventories, both over the long term and the last decade.  We have added the estimated level of lease stocks to maintain the consistency of the data.  As the chart shows, inventories remain historically high but they are declining.  In fact, we are now below last year’s seasonal low, made in September.

As the seasonal chart below shows, inventories are usually well into their seasonal withdrawal period.  Even with the SPR sales, we have already seen a larger than normal seasonal decline; in fact, the drop is rather remarkable.  It should be noted that the seasonal trough is coming soon. 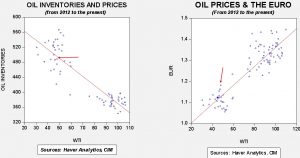 Based on inventories alone, oil prices are deeply undervalued with the fair value price of $55.05.  Meanwhile, the EUR/WTI model generates a fair value of $64.39.  Together (which is a more sound methodology), fair value is $60.13, meaning that current prices are well below fair value.  Although the most bullish factor for oil currently is dollar weakness, the rapid decline in inventory levels is also supportive.

So far, the oil market is assuming that Harvey will be bearish for oil prices.  This makes sense, although it should be noted that oil inventories took several weeks to rise during Hurricane Katrina.

This chart shows when Katrina made landfall, indicated by the vertical blue line on the chart.  It dissipated about eight days later.  Note that inventories declined.

During Katrina, refinery operations did drop significantly.  We expect them to decline again but in a much quicker fashion this time.

What the markets may be missing is that crude oil imports will drop as well.  Obviously, U.S. oil production is significantly higher now than it was in 2005.  But, this weakness in oil prices is probably not justified given the rather impressive decline in inventories and dollar weakness.  Still, we expect the markets to need evidence of slower inventory increases before prices recover.

[5] Ms. Slaughter is a proponent of the “responsibility to protect” doctrine, a Wilsonian interventionist foreign policy stance. https://en.wikipedia.org/wiki/Anne-Marie_Slaughter