[Posted: 9:30 AM EDT] Happy GDP day!  We cover the GDP data below, but the report showed 3.0% annualized growth.  Interest rates have ticked higher and the dollar is recovering from yesterday’s weakness.  Here is what we are following this morning:

Harvey hits Louisiana: After slamming Texas with massive rains, TS Harvey moved back over the Gulf of Mexico (GOM) and has made a second landfall just east of the Texas/Louisiana border.

The market most sensitive to the storm in the short run has been energy.  This morning, the massive Motiva 600 kbpd refinery announced it would shut down due to flooding.  Gasoline futures jumped about four cents per gallon on the news but have settled back.  Crude oil prices continue to slide on fears that depressed refining activity will lower demand; in addition, the Texas coast is the exporting hub for U.S. crude oil so we would expect a decline for a while.  We are probably on the “backside” of this crisis, but the rebuilding will be slow and it is likely the damage from Harvey will be extensive.

On the other hand, the need for emergency rescue spending may end the drama around the debt ceiling.  Texas is a red state and the GOP would usually want to exercise caution on spending, worried that lawmakers would try to sneak pet spending projects into an emergency bill.  If the Texas contingent puts forth a clean aid bill, it could create conditions of bipartisanship and lead to an easy debt ceiling vote.  If so, this outcome would reduce the potential for a government shutdown later next month.  After all, shutting down FEMA in the middle of a massive recovery effort would be a huge unforced error.

North Korea update: Kim Jong-un renewed his threats on Guam, suggesting the missile test over Japan was a test for attacking the U.S. base on the U.S. territory.  Meanwhile, President Trump did say that “all options are on the table” with North Korea.  In the midst of all this noise we are trying to figure out if there is a “signal” from this mess.  Although Japan was angry with the violation of its airspace, it didn’t attempt to shoot down the missile.  There are three potential reasons.  First, perhaps Japan has little faith in its anti-missile defenses and didn’t want to shoot at the North Korean missile for fear the impotence of the defense system would be revealed.  Although possibly true, if Japan actually believed it was under attack, an unreliable system is better than none.  Thus, the lack of Japanese response to the overflight suggests something else.  A second explanation is that Japan knew in advance that the missile was unarmed.  There have been reports of backchannel discussions with North Korea[1]; it is quite possible that interested parties were told in advance of the launch.  If Japan thought this missile was the opening salvo of a nuclear or chemical attack, it would make sense to use its anti-missile defense even if it is rather unreliable.  On the other hand, if one knew in advance that this wasn’t an actual attack, revealing the unreliability of the anti-missile defense wouldn’t make much sense.  Third, reactions from South Korea and the U.S. suggest that North Korea had made it clear that this missile launch wasn’t a preemptive strike, which would add to evidence that this launch was indicated in advance among these backchannel contacts.

This doesn’t mean war is more or less imminent.  The fact that the sides are talking is better than if they were not, but nothing has really changed.  North Korea’s ultimate goal is peninsula unification under Pyongyang’s rule.  In its estimation, the primary obstacle to this goal is the U.S.  Thus, the goal is to either talk the U.S. out of the region or make the U.S. look ineffective as a defender.  The flaw in the discussion is that North Korea may not be strong enough militarily to defeat South Korea.  Authoritarian regimes consistently underestimate the fighting resolve of democracies; they observe the divisions that naturally occur in the democratic process and “see” weakness.  At the same time, North Korea’s actions may not be helping its goal; there are reports that National Security Advisor McMaster and his South Korean counterparts are considering the movement of U.S. strategic assets to South Korea.  This would include the basing of B-1, B-52 and F-35 warplanes that are not currently on South Korean soil.  The U.S. is considering short-range ballistic missiles in South Korea as well.

Market action: One characteristic we have noted is that there is enough liquidity in the financial markets that equity pullbacks tend to be shallow and short.  We saw some of that yesterday; although the market opened lower, it moved higher throughout the day as the North Korean situation didn’t deteriorate further.  To measure liquidity, we have been using retail money market funds (MMK). 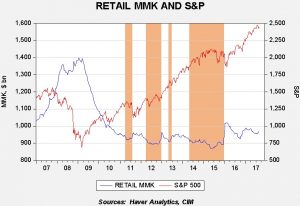 This chart shows the level of retail money market funds and the S&P 500; we have placed orange bars on the chart to show periods when the level of money market funds approached $900 bn.  At that point, equities have tended to weaken; in our opinion, this is because buying power is depleted.  Current liquidity levels are high enough to put power behind the “buy the dip” mentality we have been seeing in stocks for a while.  Barring a recession or some other factor that increases the demand for liquidity (war would do it, by the way), we expect this pattern to continue.